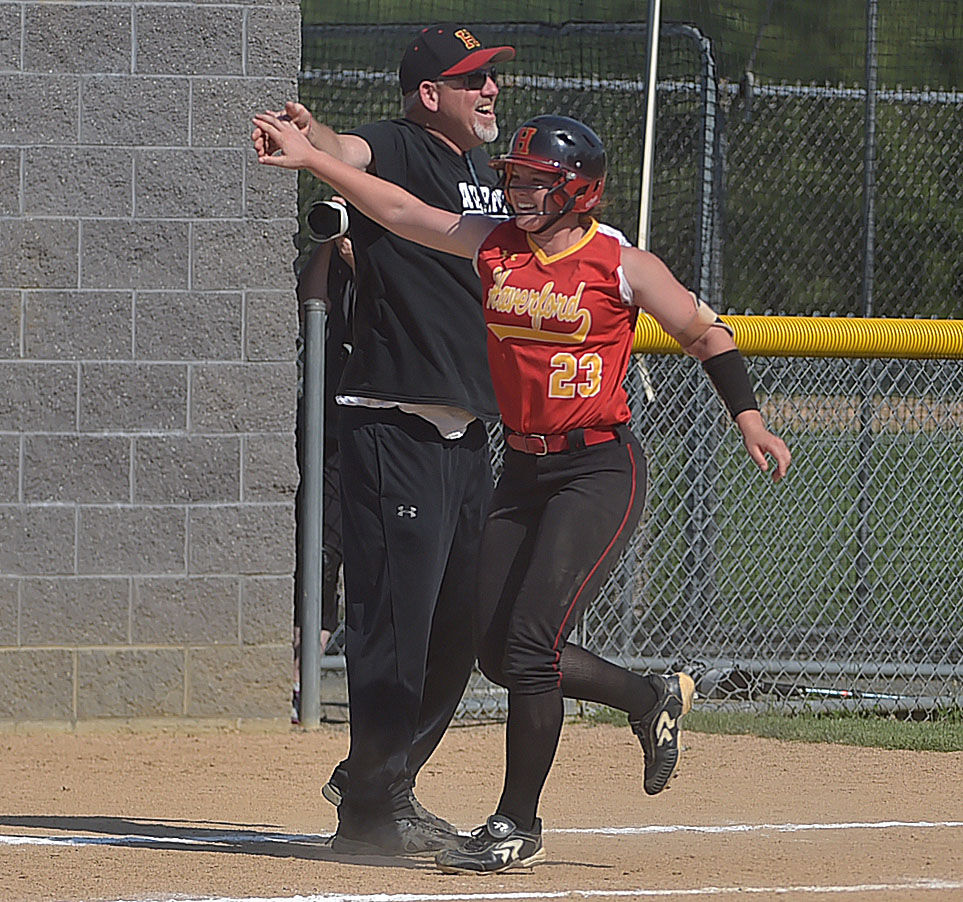 Emma Taylor (23) high fives Haverford coach Bob Newman as she rounds third base after hitting a walk-off home run to give the Fords a 2-1 victory over Pennsbury Monday in the PIAA Class 6A semifinals. (Pete Bannan/MediaNews Group)

ROYERSFORD — Haverford’s Emma Taylor crushed the first pitch she saw in the bottom of the seventh inning.

She knew it was gone the moment it left her bat.

The junior pitcher’s walk-off home run was a no-doubter, and the Fords were officially Penn State bound.

The ball traveled 200-plus feet and over the fence in left-center field. Taylor’s walk-off bomb lifted the Fords to a 2-1 victory over Pennsbury Thursday at Spring-Ford High School in the PIAA Class 6A semifinals.

“I knew it was going over as soon as I hit it,” Taylor said. “It was incredible. I couldn’t even make it to first without watching the ball.”

Haverford is going to Penn State to play for the 6A state title! pic.twitter.com/202opWv6J2

Haverford will play for the state championship Thursday in Happy Valley, where it will face North Penn, a team the Fords defeated, 5-0, in the District 1 quarterfinals.

“She had given me a first-pitch strike my first at bat. It was pretty much right down the middle,” Taylor said. “I knew there was a good chance it was coming.”

Haverford’s Emma Taylor connects on a walk-off home run that sent the Fords to the PIAA Class 6A championship with a 2-1 victory over Pennsbury Monday at Spring-Ford High School. (Pete Bannan/MediaNews Group)

Taylor’s round-tripper will go down as one of the greatest moments in Haverford High sports history. The Fords become only the third softball team from Delco to play for a PIAA title. Springfield lost in the old Class 3A division in 2007, but won it seven years later, becoming the county’s first softball team to win a state title. No Delco softball team had ever advanced this far in PIAA’s highest classification, until now.

There was a pile-up at home plate. The Fords greeted Taylor as several players eventually fell to the dirt, overwhelmed with excitement. Everyone was OK.

Afterward the team celebrated more by dancing and singing along to Neil Diamond’s “Sweet Caroline.” Indeed, good times never seemed so good for the Fords.

Before Taylor strolled to the plate to lead off the seventh, she wiggled out of danger in the top half. Riley Mahony smacked a two-out double, then stole third base. On a 3-2 count, catcher Rowan Mulholland hit a line drive to second base Shannon Gavigan, who snagged it easily out of the air for the third out.

Haverford shortstop Tess Smiley keeps a ball in the infield to save a run in the sixth inning against Pennsbury in the PIAA Class 6A semifinals. (Pete Bannan/MediaNews Group)

Haverford’s defense was stellar all game.

In the sixth inning, Pennsbury was robbed of the go-ahead run thanks to shortstop Tess Smiley, who slid to her right to keep a groundball off the bat of Ali Charlier from going in the outfield. The Falcons would’ve grabbed a 2-1 lead had Smiley not made the stop.

“It was insane. I just know that we have a really strong defense out there,” Smiley said. “And so I knew I needed to get that ball to save this game.”

With two outs and the bases juiced, Emma Hause hit a shallow fly to right fielder Rachel Yocom, who sprinted toward foul territory and made a basket catch.

“We had some amazing catches, amazing groundball plays,” Taylor said. “Shannon was right there and held second a couple of times. And then ‘G’ (catcher Haley Greenwald) behind the plate was just amazing, too. Tess with that play at short. I’m going to miss shoutouts to people. Our defense was awesome.”

Haverford (23-4) hasn’t relied too much on the long ball this year. If you ask Newman, the Fords are very much a small-ball team. That was evident when the Fords scored the game’s first run in the bottom of the third. Claudia Stuck and Brook Mckeown led off with back-to-back bunt singles. Smiley got the runners over by driving a deep fly to center for the first out. Kerri McCallum then smashed another long fly to left to chase home Stuck with a sacrfice fly.

“We always piece together when we need it,” said Greenwald, who singled and threw out a runner at second base on an attempted steal. “Everyone plays a part. We all come together and it’s just amazing.”

Haverford third base Kerri McCullum throws out a Pennsbury runner in the fifth inning of the PIAA Class 6A semifinal Monday at Spring-Ford High School.

The Yale-bound Taylor was electric from the circle. While she struggled with her command at times (three walks), Pennsbury couldn’t hit anything hard off her. Two of the Falcons’ knocks didn’t leave the dirt, and one was blooped to left field. Taylor struck out nine and scattered five hits and three walks.

Pennsbury tied the game in the fourth when Quinn McGonigle led off with a walk, stole second base, advanced to third on a sac bunt, and scored on a grounder by Charlier.

McClure kept the Fords bats at bay, allowing six hits and striking out five. The one pitch she’d like to have back, of course, was the final one she threw.

“I’m so proud of this team,” Taylor said. “We work so hard and we’ve worked so hard together and that’s the most amazing part. I don’t think any of us can believe this is happening, but we’re absolutely the team that can win.”