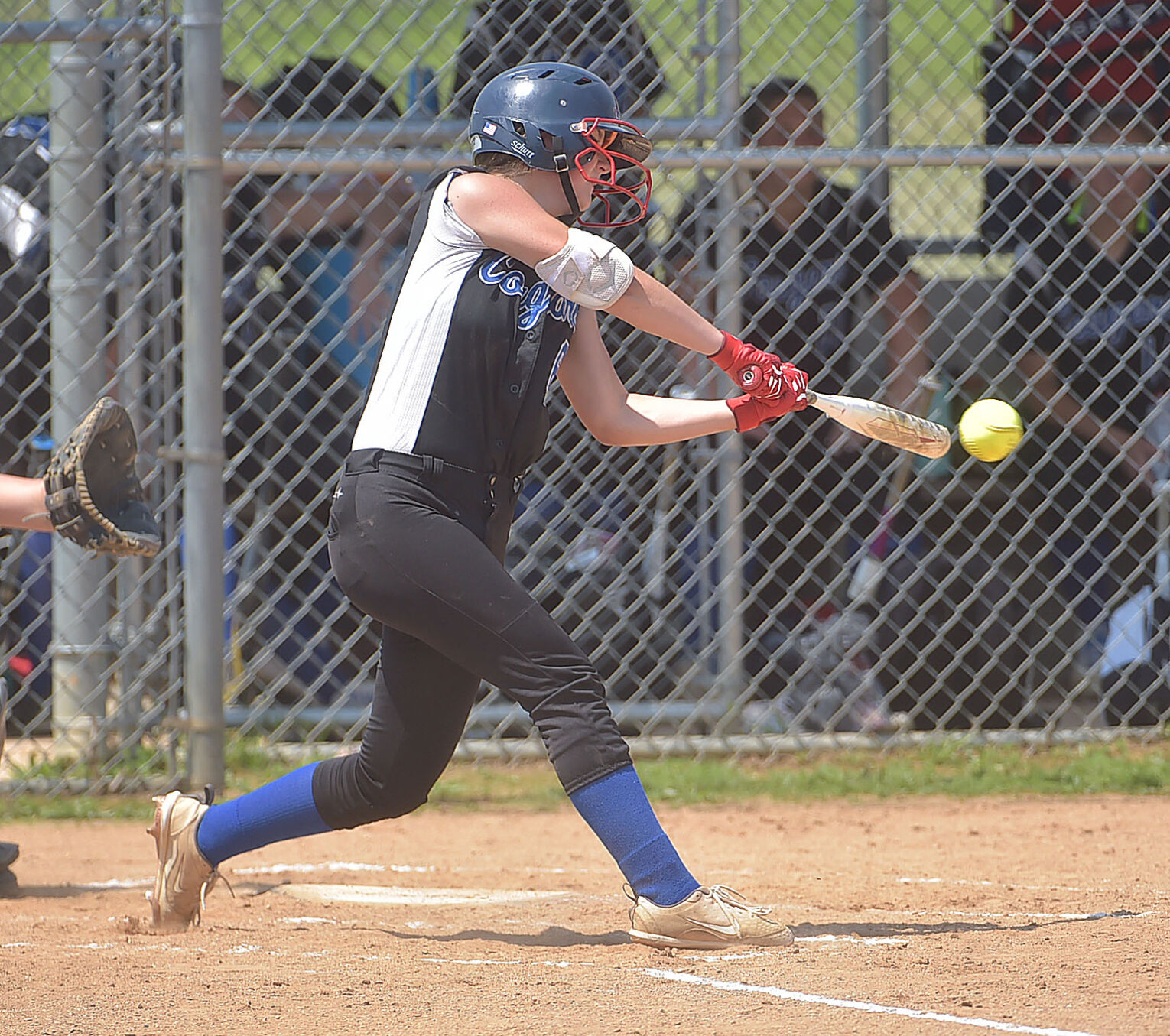 Springfield's Ava Craddock is about to knock in a run Monday in what became a 17-0 Springfield blowout win over Franklin Towne Charter in a PIAA Class 5A softball opener at Archbishop Ryan High in Philadelphia. (Pete Bannan/MediaNews Group).

PHILADELPHIA — Ava Craddock has had her share of perfect days at the plate. But Monday marked a first for the Springfield leadoff hitter.

Five innings brought five at-bats for Craddock, which turned into five hits and one big win for the Cougars.

Craddock set the tone at the top with a 5-for-5 outing as Springfield routed District 12 champion Franklin Towne Charter, 17-0, in a mercy-rule shortened PIAA Class 5A softball opener at Archbishop Ryan.

The District 1 runner-up Cougars (17-5) advance to Thursday’s quarterfinals against the winner of Marple Newtown and Lampeter-Strasburg.

The train of hits, to use her term, started with Craddock. She rapped out four singles, then a two-run double just inside the chalk in left in the fifth to cap what she can recall as her first 5-for-5 game. She also scored three times.

The District 12 champions were overmatched early, and the Cougars pressed the advantage. The first six batters of the game reached, capped by Ryleigh Frye’s RBI double in a first-inning five-spot. They tacked on five more runs in the second, Frye chasing starter Aubrey Seider with base-scoring knock.

The middle of the order followed Craddock’s lead.

The early outburst reinforced the theme of not getting complacent, the Cougars driving themselves to keep pouring it on.

“We all have the mindset to never take anyone lightly,” Craddock said. “But when it gets like that, everyone gets hyped and it becomes a train of hits. … We’re all like, OK, we can do this if we keep up what we’re going.”

All those runs would be plenty for Ciasullo in the circle. She worked five clean innings, facing one over the minimum. She walked none, struck out 10 and allowed a solitary single to eight-hitter Brianna Gordon in the third inning. She responded by striking out the next six batters.

Franklin Towne Charter didn’t help its cause with seven errors, including three in the first inning. Five of the 10 runs allowed by Seider were unearned. She was chased after getting just four outs.

But the Warriors warmed to the game, albeit too late. Dana Gardner allowed nine hits in 3.2 innings, but she limited the damage in the second and posted a zero in the fourth. Gordon supplied the best defensive play of the game with a knee-sliding catch in right for what could’ve been a bases-clearing hit, instead going down as a Hope Priemont sac fly.

“Coming into this game, we knew that it was going to be a very good team,” Gordon said. “I’d say this is the best team we’ve played this year. We were just a little too nervous and we got in our heads at the beginning. But I think through the game, we started to learn how they were playing and starting to push through a little bit.”

Monday marked Springfield’s first states game since winning the Class AAA title in 2014. They hope to be at the start of a similar journey.

“None of us have been here before,” Galloway said. “We just take it one game at a time, but this game is a big confidence booster. Coming in here and scoring (17 runs), it set the tone for us. We know what we have to work on.”