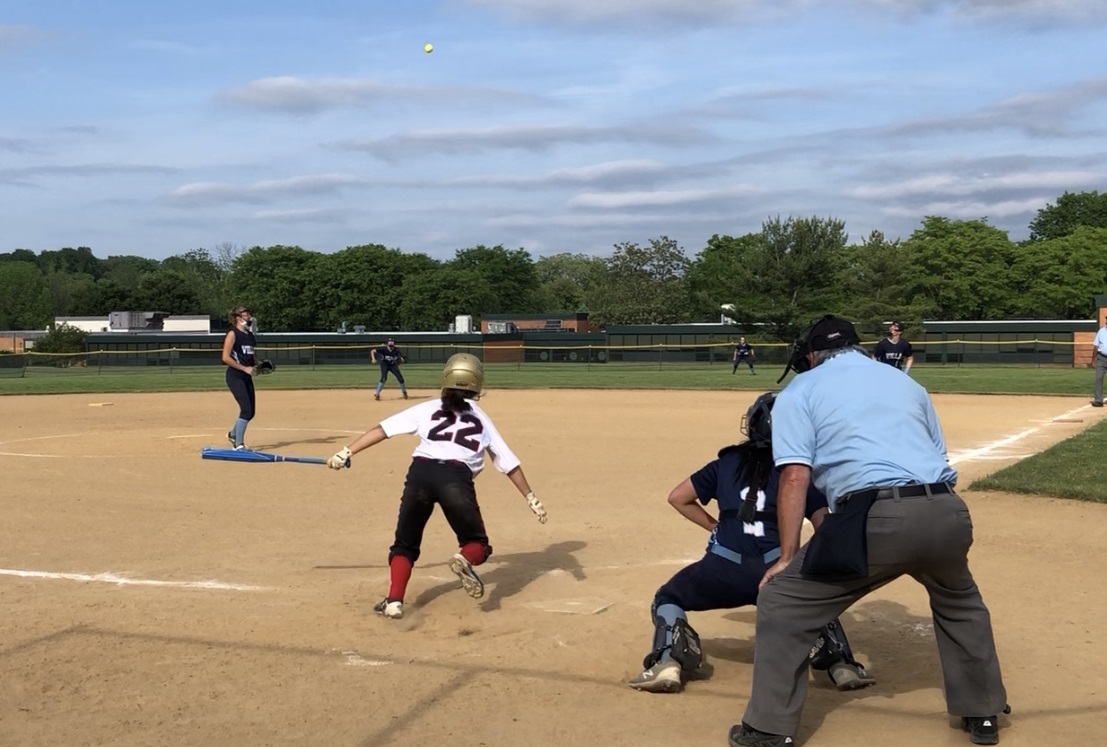 Gwynedd Mercy Academy freshman Jenna Morrison (22) watches the flight of her sixth inning triple against Villa Maria Academy during their District 1-4A semifnal on Tuesday, May 25, 2021. (Andrew Robinson/MediaNews Group)

LOWER GWYNEDD >> Jenna Morrison’s birthday dream didn’t quite play out, but she was more than happy to take what reality had as a gift.

The Gwynedd Mercy Academy freshman catcher, who celebrated her 15th birthday Tuesday, set the table for her team with a solid playoff debut. While the District 1-4A softball tournament has set up as a de-facto AACA playoff, that didn’t mean the Monarchs were overlooking a Hurricanes team they’d beaten twice in the regular season.

“Before the game, I said to Lex (Weiss) we’re going to get back-to-back home runs in the first inning,” Morrison said. “We ended up getting back-to-back singles, so that’s something and we got the win, which was the important thing.”

Technically, it’s the second straight District 1 final appearance for the Monarchs, who fell to Nazareth Academy in the 2019 title game. With no 2020 season due to COVID-19, the four upperclassmen starters for Gwynedd Mercy Academy made it their season goal to get back and this time, win in the championship.

Senior second baseman Carly Andrews, a starter in 2019 as well, couldn’t hold back a smile when she described what it meant to play for the district trophy. GMA will host No. 2 Villa Joseph Marie on Thursday with only the winning team advancing to the PIAA tournament.

“Sophomore year, it didn’t end the way we wanted it to so the fact we’re going back is insane, we’ve had such a great season so far,” Andrews, who had two hits Tuesday, said. “We’re hoping for that championship and hoping for that win.”

Monarchs pitcher Maddie Seidel had an excellent game, striking out 13 batters and helped herself out with two hits, two RBI and two runs scored. Her battery partner wasn’t bad either, with Morrison making a couple nice plays behind the dish to go with her offensive production.

It’s been a productive pairing all season and Morrison said Seidel’s made it easy for her while also offering plenty of tips. Seidel, who is also a catcher for her PA Chaos travel ball squad and a co-captain for the Monarchs, has taken Morrison on as an understudy.

Gwynedd Mercy Academy’s Maddie Seidel (6) spins a pitch in to Villa Maria Academy’s Ari Butler during their District 1-4A semifinal on Tuesday, May 25, 2021. (Andrew Robinson/MediaNews Group)

“She’s given me more advice than any catching coach I’ve ever had,” Morrison said. “She’s taught me where to put my signs, how to frame better, everything really.”

After losing to West Chester Rustin on May 1, the Monarchs ripped off six straight wins that saw them secure an outright AACA title before ending the regular season with a loss to Perk Valley. During that stretch, the players got a lift from a parents’ cowbell-ringing but the bell got banned for the postseason.

“Before the game, we said we need to be our own noise-makers,” Morrison said. “We wanted to bring the energy up and start hitting early.”

After Seidel retired the side in order to start the game, Gwynedd Mercy Academy got right to hitting. Morrison wanted a leadoff homer as a birthday present but instead legged out an infield single and stole second to start up a nine-batter, six-hit, four-run first that gave the Monarchs all the offense they would need for the day.

Weiss followed with a single and a ball hit in the infield dirt by Seidel loaded the bases before senior Lauren Solvensky looped a two-run single to left that plated the two freshman. Senior Jorden White brought in Seidel on an RBI groundout and after Andrews singled and moved up on Bridget Scanlon’s infield hit, No. 8 batter Kalie Mogg ripped an RBI single that scored Andrews to complete the frame.

“Once we start that early, that’s what gives us the push to finish the game,” Andrews said. “As soon as we started getting hits right in the beginning, we knew we were going to be in position to close out the game.

“We’ve seen that throughout the season, once we get it going, it usually keeps on going.”

Villa Maria didn’t get the result, but the Hurricanes played with a lot of heart and energy throughout the game. Grace Wisler, who started in the circle, led off the second with a ground-rule double for the first of her two hits. She advanced a base then scored when Alex Kilpatrick hit an RBI groundout to make it 4-1.

Wisler shut down the Monarchs in the second inning and pitched around two hits in the third but the hosts didn’t stay quiet for too long.

Morrison collected a one-out single in the fourth, moved up on a passed ball and got to third on a Villa Maria error before she scored on a liner single by Seidel. Another error allowed Weiss to score and finally Seidel capped the inning when she came home from third on a passed ball to extend the lead to 7-1.

The pitcher-catcher tandem combined for another run in the home sixth. Morrison started off with a shot to right-center and rounded third thinking about home before settling for the leadoff triple. She didn’t stay there long as Seidel’s groundout brought the freshman home for the final margin.

“I’ve just tried to stay calm and instead of playing for myself, play for my team,” Morrison said. “That helps me get in a better mindset and lets me relax in the batter’s box.”

A team that starts five freshmen and sophomores, the Monarchs have come a long way in a couple months and they now sit a win away from the state tournament. Gwynedd Mercy Academy won both regular-season games against the Jems, but that’s all off the table in the postseason.

All the Monarchs can do is come ready and if form holds true, there’s a good chance that part will be a given.

“Our first game against Nazareth, there was no confidence and I think we struggled early because we knew we were a young team,” Andrews said. “As it’s gone on, you can see through the wins we’ve come closer as a team.

“I never would have thought through a crazy year and COVID we would become as close as we are but it’s all brought us together.”