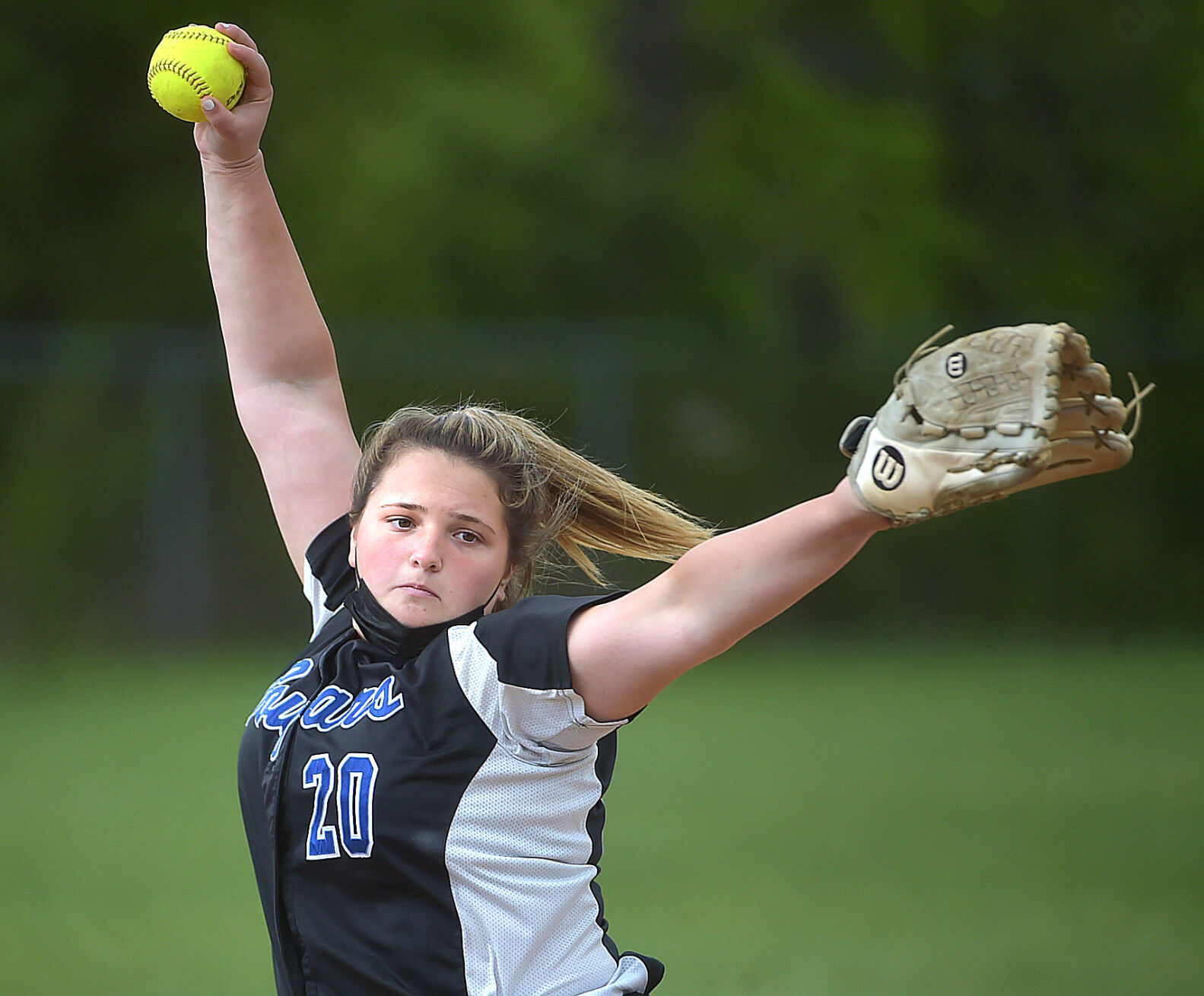 Springfield pitcher Sam Ciasullo winds up against Marple Newtown. Ciasullo retired nine of the last 10 batters she faced to close out a 2-1 win for the Cougars. (Pete Bannan/MediaNews Group)

Springfield senior Sam Ciasullo bested Marple Newtown junior Kelsey Racine. The Cougars scratched out solo runs in the first and second innings and held on for a 2-1 victory.

The win gives Springfield a much-needed boost in the District 1 Class 5A power rankings. The tournament begins on May 24. Springfield (11-5) entered play sitting in the No. 8 spot, while Marple Newtown (11-5) was in second place. The top 12 teams make the tournament.

There was a playoff buzz to this one.

“What’s crazy about this season is that every team is good,” Ciasullo said. “You can’t take any team lightly. Marple is very good and it’s always close against them. Mostly every game we’ve played this year has been close.”

In the first meeting between the teams in early April, the Cougars let a four-run lead fall by the wayside as Marple rallied to score six unanswered and won 8-6. The Cougars enjoyed getting payback on the Tigers’ turf Monday.

“They came back on us in the first game, but this time we came out on the better end,” Ciasullo said.

The hard-throwing Ciasullo was excellent in the rematch. The future Holy Family nursing major racked up 10 strikeouts in the complete game performance. Ciasullo scattered five hits and allowed one run, which was unearned, and issued zero walks.

“I just try to make every pitch and mix it up as best as I can,” she said. “I tried catching them off-guard, but in this league, every batter you face is good and you don’t want to take them lightly.”

Racine was the tough-luck loser, sporting an almost identical pitching line with her counterpart. After a shaky start, Racine was electric. Despite fighting through a sore back, she notched 12 strikeouts in going the distance, giving up two earned runs on five hits.

In the bottom of the first, Tigers’ shortstop Lindsay Walsh ripped a two-out triple but was left stranded. The Tigers plated their lone run in the third when leadoff hitter Shauna Kerrigan singled and scored from first on a hit by catcher Abby Smith. An error in left field paved the way for Kerrigan to race home. The Tigers couldn’t find a way to get the equalizer, however, as Ciasullo was dominant the rest of the way.

Ciasullo said she felt relaxed after her lineup gave her an early 2-0 lead.

“When the team gets me some early runs, it definitely makes me more confident out there,” Ciasullo said. “And it helps a lot knowing that we can come back in and get some more runs.”

Springfield’s Jill Condi knocks what turned out to be the winning run against Marple Newtown as the Cougars went on to a 2-1 Monday.. (Pete Bannan/Medianews Group)

Ava Craddock led off the game with a walk and scored on a sacrifice fly off the bat of Ally Heston. In the second inning, Lanie Morris doubled and scored on an RBI single by nine-hole hitter Jill Condi, who isn’t your typical bottom-of-the-order batter.

“I always feel like I have to kind of step up a little more because I’m a senior and I am all the way down at the bottom of the batting order,” Condi said. “And when everybody moves up (on defense), I just try to hit it right over them.”

Marple got its first two hitters on board in the fourth, but Ciasullo caught a line drive off the bat of Emily Reynolds and fired to first base for a 1-3 double play. Ciasullo then retired nine of the final 10 batters she faced.

Springfield shortstop Ava Craddock is late with the tag on Marple Newtown’s Ryleigh Murrin in the seventh inning. Murrin, who represented the tying run, was stranded as the Cougars held on to win. (Pete Bannan/Medianews Group)

“This is my fourth year (starting on varsity) and I think we’re probably the best that we’ve been,” Ciasullo said. “I mean, we went up against Ridley and Garnet (Valley) and they were super close games and we’ve never been better. I think this year we have a really good team.”