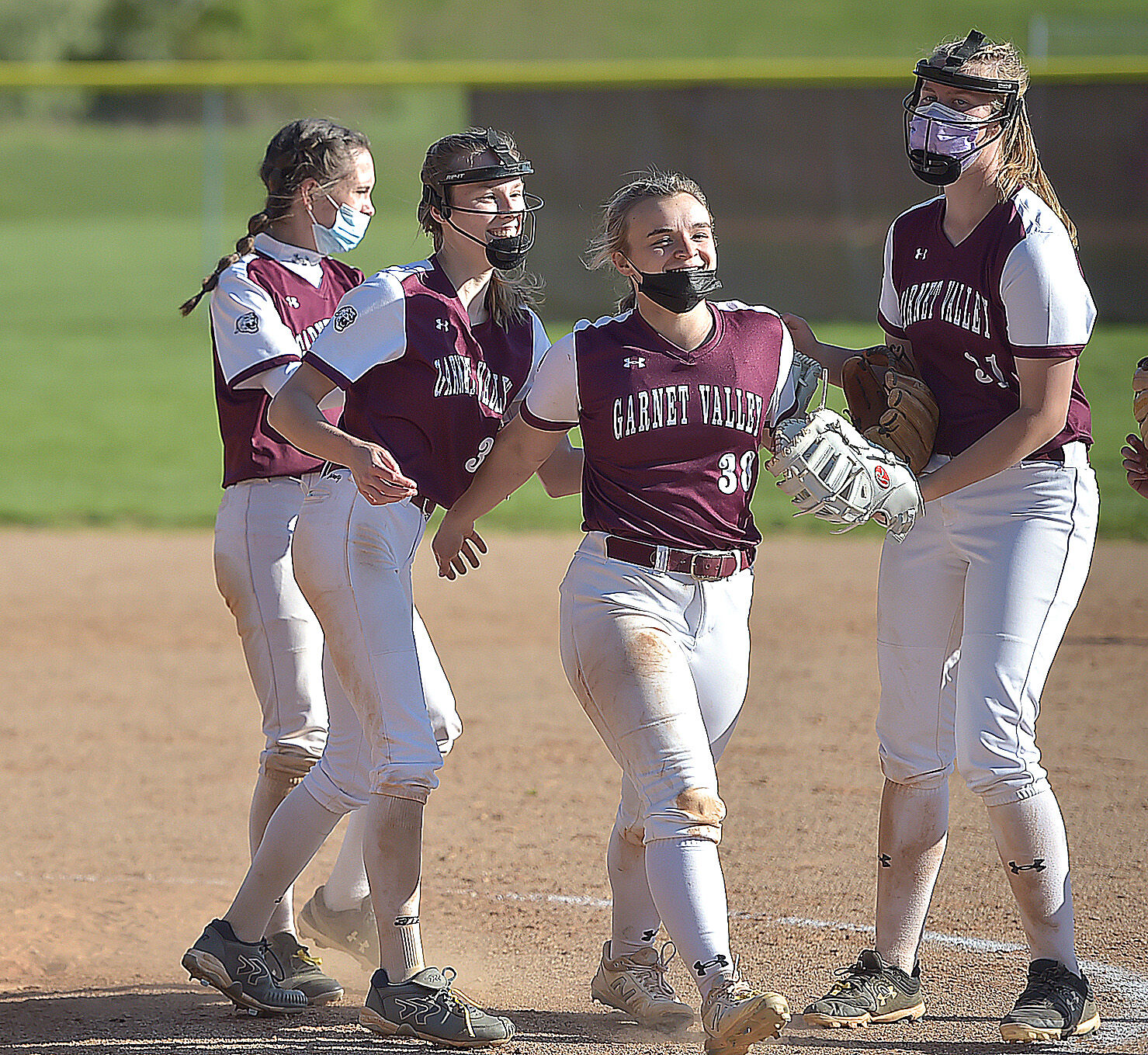 Smiles on senior day at Garnet Valley as the Jaguars defeated Marple Newtown 7-3 on the power of Morgan Mesaros, center, who had a grand slam in the third inning. Teammates including Emily Orsini (16), pitcher Kelly Cornog (35) and Kate Dugery (31) congratulate each other after the final out. (Pete Bannan/Medianews Group)

That shouldn’t come as a surprise.

The James Madison-bound shortstop ended the Jaguars’ offensive doldrums in the third inning by crushing a pitch over the fence in left-centerfield for a grand slam. Later in day, she made a diving stab at short and threw a bullet from her knees to first base for the final out in Garnet Valley’s 7-3 win over Marple Newtown.

“We knew it was going to be a tough game, but we all sort of just came together and it was a great team win,” Mesaros said.

Garnet Valley’s Morgan Mesaros smacks a grand slam in the third inning Monday to boost the Jaguars on their way to a 7-3 defeat of Marple Newtown on Senior Day. (Pete Bannan/Medianews Group)

It was probably the biggest victory of the season for Garnet Valley, which was tied with Marple Newtown entering the day atop the Central League standings. They were two of four one-loss squads in the conference. It was imperative the Jags left the field with a ‘W’ and keep pace with the rest of the top teams. But they were at a disadvantage from the start.

Two starters, Anna Sidlowski and Maura Coleman, were injured in a 2-0 loss at Interboro on Friday. To add insult to injury, the Jags’ potent offense was held without a hit.

So, it was up to the senior class to kick the team back into gear.

“We wanted to win this for each other, “ said Bechtold, starting catcher and future East Stroudsburg Warrior. She had a hit in three plate appearances. “It was a big game, especially with all the adversity we’re facing right now with injuries and stuff.”

The underclassmen played an important role, too. Garnet Valley received an outstanding pitching performance by Kelly Cornog, who has split mound duties with Sidlowski this year. Both are sophomores brimming with potential.

Cornog bounced back from a shaky GV second inning in which she allowed three unearned runs on two hits. She retired 13 of the final 14 batters she faced, pounding the strike zone and getting a ton of swings and misses. Cornog struck out 10 while allowing just the two hits and a pair of walks.

Cornog said she had to deliver for her teammates, most notably injured comrade Sidlowski. Was she more motivated than normal?

Well, no problem there. Cornog was electric after Marple Newtown ace Kelsey Racine hit a seeing-eye single through the hole between first and second base to give the Tigers a 3-0 lead. Cornog then settled in, trusting her stuff and her batterymate Bechtold.

“She just tried to hype me up,” Cornog said, “and the insurance runs we got really helped me settle down and get in a groove. I just wanted to step up for my teammates.”

Mesaros delivered the game-changing blast in the Jags’ six-run third inning. Kate Dugerty began the frame with a double and Schmoyer and Saboja each walked. With two outs, Mesaros got her pitch and didn’t miss.

“I knew she was going to come out probably throwing around the zone,” Mesaros said. “I was just trying to get my pitch and making sure I was staying off any of her high pitches and anything out of the zone. It was a 2-2 count and I thought I was probably going to get a change-up, and I did. It was right on the white and, yeah, I just hit it.”

The perfect script was written for the Jags seniors. GV sent 10 hitters to the plate in the third. After Mesaros’ grand slam, Emily Orsini ripped an RBI triple and came around to score on an infield hit by Hannah Long.

“It was a tough loss on Friday and we lost some of our key players, so we knew we had to come in here today with a positive mindset and just play our game.” Mesaros said.

Racine racked up 11 strikeouts in the loss for the Tigers. Emily Reynolds singled and Gab Kaplan walked twice and scored a run.