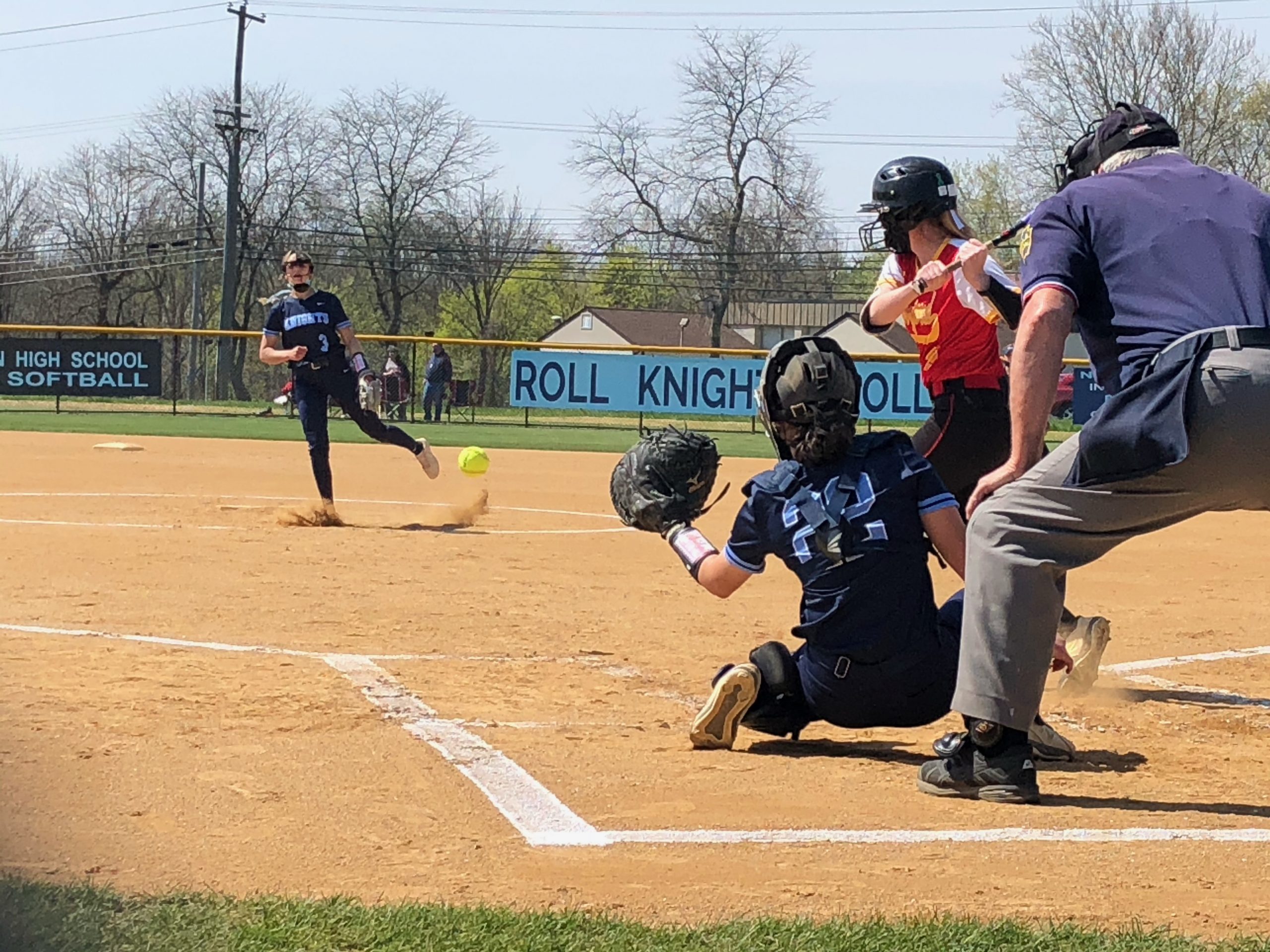 TOWAMENCIN >> It ended up being a productive week for North Penn softball.

After losing for the first time this season at Pennsbury on Tuesday, the Knights rebounded with a win over Neshaminy on Friday. How their week would end was going to be determined Saturday when North Penn hosted Haverford in a meeting of teams ranked in the top five of the District 1-6A power rankings.

Mady Volpe carried a perfect game into the seventh and the Knights’ bats and gloves came up clutch in a 4-1 win over the Fords to finish off a 2-1 week against top competition.

“That’s playoff-type softball, you play good defense, get good pitching and get clutch hits,” Knights coach Rick Torresani said. “That’s what we did (Friday) and today to finish a good week. I’m excited for the girls, they’re working hard.”

Volpe, the Knights’ senior pitcher, lost her bid at a perfect game, no-hitter and finally a shutout in the top of the seventh but the Coastal Carolina recruit was practically untouchable the rest of the day. The righty struck out 15 Fords batters, including her 550th career punchout and had solid defense behind her.

After Volpe struck out the first eight batters of the game, Fords No. 9  hitter Claudia Stuck tried to surprise the Knights defense by putting down a bunt. At third, Annabelle Smink was ready, making a nice play to get the runner and end the inning.

“I wasn’t really expecting it, but we’re always ready,” Smink said. “It was a little shocking but it came my way, so I knew it was my turn and I did my job.”

Smink was the Knights’ busiest fielder on Saturday, having four ground balls come her way but the sophomore was sure-handed on all of them. At the plate, her weekend didn’t get off to the best start with a pair of strikeouts but when she came up for the third time, things went better.

Thanks to a leadoff single, stolen base and good base-running from Julia Shearer, Smink was able to punch an RBI single through the second base gap to put North Penn up 4-0 in the fifth.

“I didn’t think about it and knew I could hit it,” Smink said. “If it was an outside pitch, I knew I had to foul it off. I told myself it was time to do my job and I couldn’t do what I did the other two times I came to the plate.”

North Penn’s Annabella Smink hits an RBI single in the fifth inning against Haverford during their game on Saturday, April 24, 2021. (Andrew Robinson/MediaNews Group)

North Penn threatened in the bottom of the first after Shearer led off with a single and Volpe hit a two-out infield single to put runners at the corners. However, Fords lefty Emma Taylor struck out the next hitter to end the frame.

Taylor pitched a good game, retiring the side in order in the second and third innings before the Knights struck in the fourth.

An error and single by Bri Wilmot put runners on with one out before Gianna Cimino singled to right field. Stuck, the Fords’ right fielder, made a great throw in and catcher Haley Greenwald was able to tag the lead runner and temporarily keep North Penn off the board.

Senior Carley DiGiuseppe came through in the next at-bat however, ripping a hard-hit ball into the second base gap that gave the shortstop some trouble and brought in two runs. Knights shortstop Sophia Collins followed with an RBI single to score DiGiuseppe, putting North Penn up 3-0.

“We were able to hit-and-run, got a couple steals and came up with the clutch hits, which is what you have to do in playoff softball,” Torresani said. “You’re going to face good pitchers so you better be able to put the bunt down and do all the fundamental things correctly and that’s what we did the last two days and as a result, we played really well.”

Haverford got on the board in the final inning after leadoff batter Brooke McKeown drew a leadoff walk to break up Volpe’s perfect game bid. The North Penn ace struck out the next two batters but Fords cleanup hitter Kerri McCallum collected her team’s first hit with an RBI double.

Volpe got the next hitter to line out to Collins at shortstop, thwarting a potential rally and keeping the Knights near the top of a fluid 6A power ranking table.

Torresani said the loss to Pennsbury was a wake-up call for his players and Smink added it made the Knights re-focus to end the week on a good note. The Knights’ next four games come in SOL crossover contests with the SOL Patriot Division before returning to Colonial completion against Central Bucks West on May 6 with a date against current 6A top seed Hatboro-Horsham slated for May 7.

“We really put our work into it,” Smink said. “We were all focused when we were hitting and fielding and our team chemistry really helped, everyone was up and cheering.”