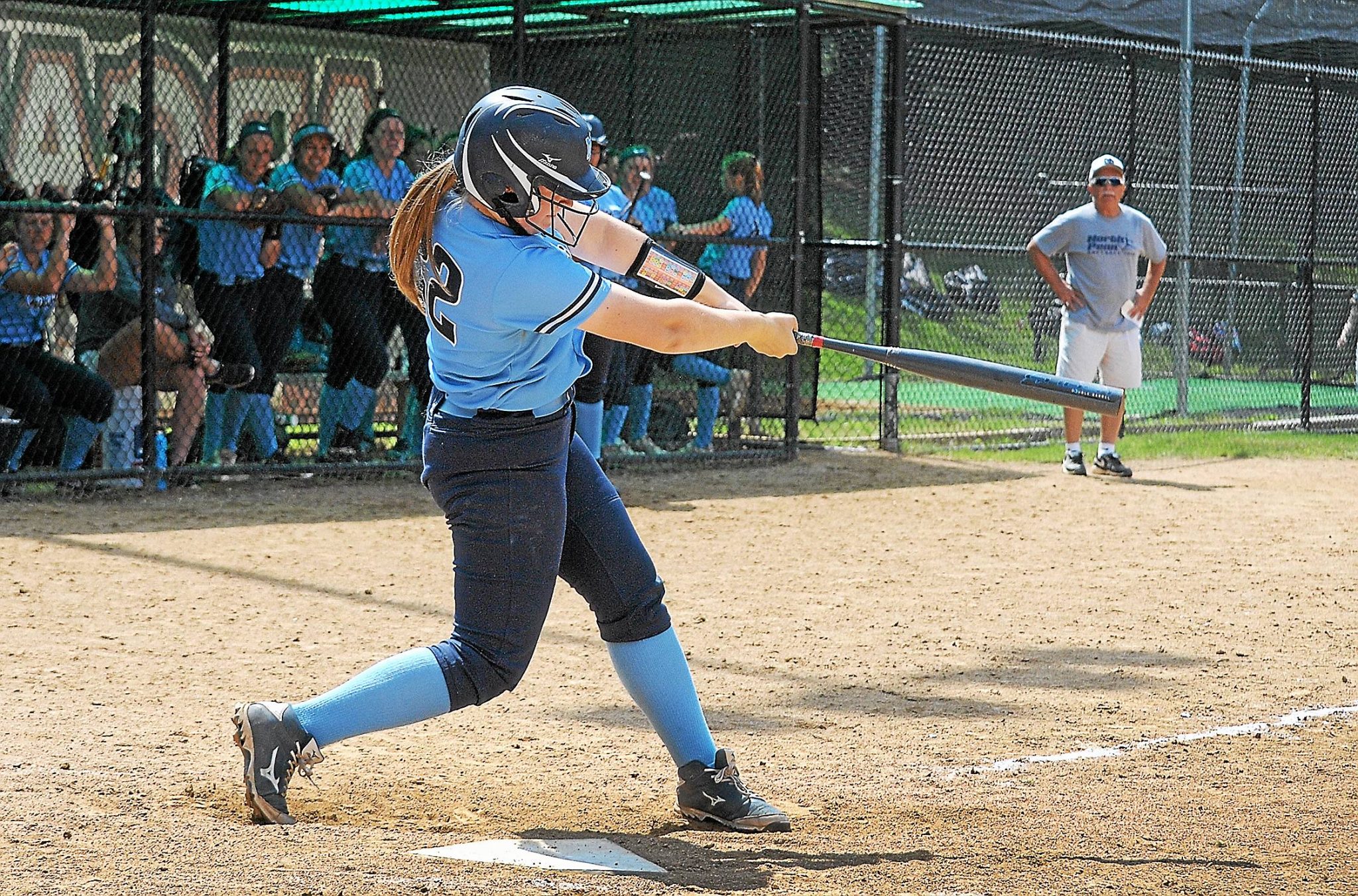 Amanda Greaney is a creator.

The North Penn senior has created record offense at the plate for the Knights’ softball team and an un-countable number of strikes with her refined technique behind the plate. Away from the diamond, that creativity is just as prevalent as Greaney has pursued solutions to obstacles present and yet to arrive.

While Greaney’s senior softball season ended before it even got to start, the catcher and co-captain has left a lasting mark on the Knights program.

“The best way I can put it is she’s our Mike Schmidt,” North Penn coach Rick Torresani said. “That goes back a ways, but when we weren’t hitting as a team; she’d be the one to get a hit or a home run to help us win the game. People don’t like to pitch to her, so the girl behind her gets a couple hits.”

North Penn softball, like every other spring sport team and athlete, had its season cancelled due to the COVID-19 pandemic, denying Greaney and her teammates the chance to try and fulfill a potential-filled season. Last year, with Greaney hitting .417, the Knights finished second in District 1-6A and reached the state quarterfinals.

North Penn’s Amanda Greaney smiles as she jogs towards home plate after hitting a home run May 31, 2018. (Gene Wals/MediaNews Group)

This season, the Knights felt like they would be even better with Greaney and senior co-captain Victoria Juckniewitz leading the way. Unfortunately, the day before their first scrimmage, Torresani had to gather the Knights and tell them they wouldn’t be together for at least a few weeks.

“Having it taken away and ripped out of our hands before we even got started made me realized how much I was taking it for granted,” Greaney said. “I didn’t realize how much this sport and this team has meant to me the past four years, it’s like you’re constantly getting your heart broken every day you can’t be on the field with them.”

Numbers are important in softball, but they don’t give a fair representation of all Greaney has meant to the program. Torresani noted a time last year that few people saw but also said everything needed about Greaney.

“We were in Florida for our trip to Disney and she easily could have spent all her time hanging out with the seniors and other juniors,” Torresani said. “She hung around with the ninth graders to make sure they were ok, what we were supposed to be doing and when we were supposed to be back. I knew I didn’t have to worry about those kids.”

Ironically, Greaney would not have ranked leadership as one of her top qualities when she came into the program. She didn’t have much choice in the matter however, as a talented pitcher in freshman Mady Volpe arrived during her sophomore season, meaning Greaney had to set the example.

While they won’t get a third straight year as a battery, the two future Division I players have left quite an impact on each other. Torresani credits Greaney for showing Volpe how to turn preparation into a year-round cycle, Greaney credits Volpe for making her a better catcher.

During her freshman year, Greaney started weight lifting at Relentless Athletics at the suggestion of then-Knights pitcher Bri Battavio. Any nerves about being new or not putting up as much weight at first quickly subsided and Greaney really started to enjoy the process and results of her program so much so that she had Volpe start tagging along the next year.

“I love her, I adore her, she’s such a great person and a great pitcher,” Greaney said. “It’s been so cool having that pitcher-catcher bond that’s actually a true friendship and not just on the field.

“A lot of her best pitches are right on the corner and right on the edge so I learned quickly she wasn’t going to get calls for strikes a lot of the time even though they were perfect pitches so I needed to work on my game to make sure I could make them a strike to the umpire. That was the most crucial thing I had to do, make sure her pitches looked that perfect to the umpire.”

Once the Knights broke ranks for the last time back in March, Greaney and Juckniewitz tried to keep the team together and the players’ spirits while the PIAA remained in suspended animation. Text chains and Zoom calls were commonplace and even when the news everyone feared finally came down, the Knights’ co-captain kept acting like a leader.

“I’m not going to lie, as soon as a Zoom call would end, I would get so upset,” Greaney said. “I kept thinking I might not ever see these girls again or get to play with them again but in front of them, I kept the most positive attitude I could. There were times I would break down in front of them because I was so upset, but I wanted to keep motivating them. Once it ended, it was the same thing, keep your skills up and even though I’m not going to be there, you guys want to be good for yourselves.”

Behind the plate, with a subtle move of the glove or frame of a pitch, Greaney created strike calls. With her bat, she created runs and hits at a record pace. The power she hits with was another creation, one she built with time and dedication in the gym. By including the team’s underclassmen and not slacking on her responsibilities, Greaney helped create a unified team.

It’s the last one that she’s most proud of.

“Going to college, I’m going to do my best to make my high school team proud and show them who I am and what they’ve made me, all I want to do is make people proud,” Greaney said. “Stats can only tell so much about someone, your actions and how you’re representing yourself as a person are so much more important.

“North Penn has allowed me to grow in that aspect more than I even thought I’d be able to. I’m proud of my team and how much we’ve overcome, so what I’m most proud of is how I’m helping and welcoming everyone into the program because I’ve always said I don’t want anyone to feel left out on our team.”

Greaney has committed to continue her career at Lehigh next year, which is the perfect place for her to keep creating. While she’s always been an athlete, playing multiple sports growing up before going all-in on softball, Greaney’s creative spark was always there off the field.

Among the top students in her graduating class at North Penn, Greaney will pursue engineering at Lehigh, which was what drew her to the university in the first place. The path of formulating an idea and seeing it through to a result steered the senior to her future path early on.

“When I was little, I loved LEGOs, I wasn’t into dolls, I was always into LEGOs and I loved to build,” Greaney said. “Sometimes I followed the instructions but I also loved to make my own things, just create whatever I wanted to. My parents knew early on I loved to build and create things so when I got older, my dad would have me help him with projects around the house.

“I started to enjoy making things and putting things together. The high school has such a great opportunity, they call it the Engineering Academy, it’s five courses that expose you to all the different types of engineering and everything you can do with it and I loved every minute of those classes. That’s what I’m so lucky to have at North Penn because not many schools have that.”

#SOFTBALL: @greaney_ag blasts a 2-run home run to center field for a 10-0 @NPsoftball lead B4 vs. Souderton. pic.twitter.com/XOmKk1POVZ

This year, Greaney and two classmates had been working on a project where they were designing a footwear insert that would build up a charge of electricity through the wearer’s movement and could be used to re-charge devices like a phone or tablet. The project is on hold due to school facilities being closed, but they had gotten strong feedback on their work.

With her mind made up on a major and a good fit in Lehigh, Greaney’s work on the softball field would turn it into the perfect package deal.

“Before I had even talked to the softball coach, Lehigh was my No. 1 choice, then I started going to camps and got noticed,” Greaney said. “It was the best feeling to have those two worlds come together like ‘I want to go there for my engineering degree’ and ‘I want to go there to play softball.’ That was one of the most exciting moments of my life and when he finally offered me; that was the best day ever.”

Torresani firmly believes the best is yet to come for Greaney although he is going to greatly miss having the catcher as part of his program next year.

“Her and I get along so well, it’s like she reads my mind and I read hers, which is a rare thing to have,” Torresani said. “I’m going to miss the fact that I can go to her and know everything’s going to be OK.”

On top of missing out on seeing what season the Knights could create, Greaney said she most laments losing the chance to be a captain alongside Juckniewitz as it was something the two of them had talked about for a few years. It’s not the way either co-captain wanted to end their time at North Penn, but Greaney knows the players coming back won’t drop off in their absence.

“For me, the biggest thing about a team is talent can only get you so far, you need to be a solid unit and have each other’s backs,” Greaney said. “There’s only person standing in the batter’s box at one time, but you need to have the whole team supporting them. If you’re up there and you feel like you’re alone, it’s hard to play well.

“If you have your team supporting you, that’s the best feeling in the world.”