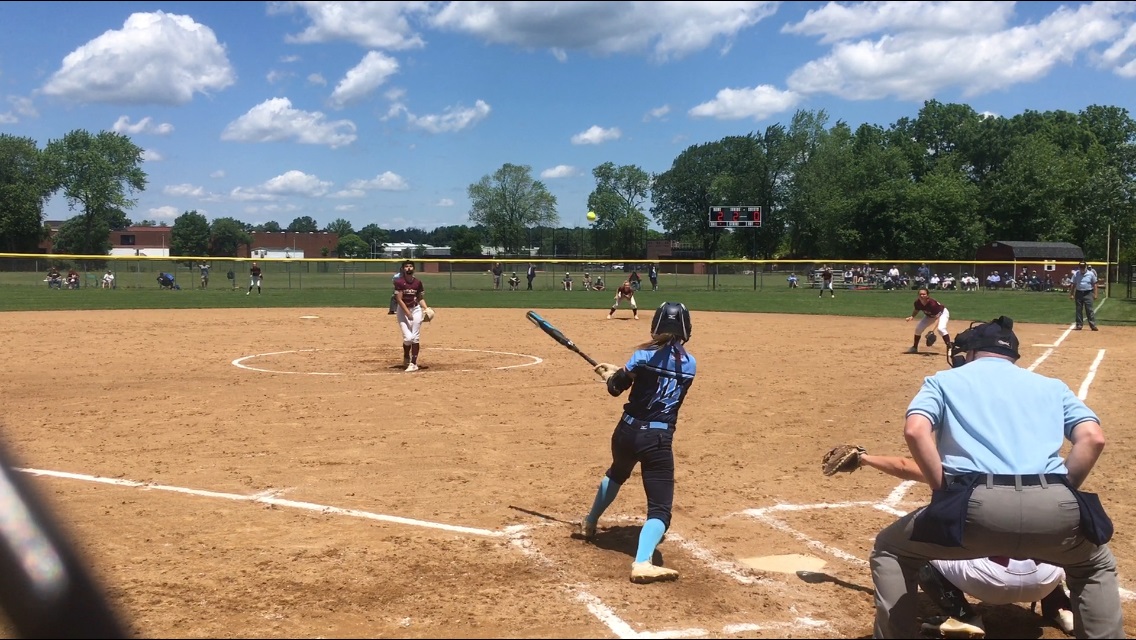 North Penn's Jordan Pietrzykoski hits a double against Whitehall in the first round of the PIAA 6A softball tournament on Monday, June 3, 2019. (Andrew Robinson/MediaNews Group)

HORSHAM >> Mady Volpe didn’t give her defense a lot of work Monday afternoon, but she kept the bench plenty busy.

The North Penn sophomore righty gave up just one hit and had seven total balls put in play against her as she dominated in the circle against Whitehall with 15 strikeouts in the opening round of the PIAA 6A softball tournament. Volpe laughed when asked if she was trying to give the defense a day off, but it was just the kind of outing the Knights needed.

North Penn’s offense was tuned in as well and the Knights carried it all into a 9-0 victory.

“I was just trying to locate my fastball and I was working my changeup and my rise ball a lot,” Volpe said. “I worked a lot on the rise this weekend, I knew it would be a dominant pitch coming into this game.

“I was just dominating with Amanda (Greaney), we were working hard. I knew my defense was there no matter what, but I was just trying to throw strikes and get ahead of batters.”

Knights coach Rick Torresani credited the bench and JV players in the dugout for giving the team a boost of energy and it’s one the fielders and hitters felt. After nearly every one of Volpe’s strikeouts, reserves Gianna Costello and Abbey Picozzi exchanged a series of handshakes, ramping the speed up on each exchange until they ended it with a chest-bump.

After falling to Downingtown West in the District 1-6A title game last Thursday, the Knights took a day off, put in a good practice Saturday and came out focused Monday afternoon. Volpe struck out the side around a walk in the top of the first, giving the bats their first crack at the Zephyrs.

Leadoff hitter Victoria Juckniewitz hit a rope that was snagged in center field for the first out, but Knights second baseman Jordan Pietrzykoski felt it was a good sign.

“We tried to take it easy, recoup as a team and come out hot,” Pietrzykoski, who went 3-for-4, said. “Victoria’s hit was a great start, the rope to center field was just good for everyone’s confidence and it led to us all having good swings.”

Offensively, Torresani said he wanted his team to focus on putting the ball on the ground and making things happen off that. The Knights ended up scoring two runs in the bottom of the first without a ball leaving the infield.

Pietrzykoski legged out an infield hit and later scored on an infield error, Greaney singled, Jamie Beer hit an infield single and Volpe drove in courtesy runner Costello on an infield knock of her own for a 2-0 lead.

“We try to not do too much here,” Pietrzykoski said. “You don’t need to hit a home run every time you’re up. We try for base hits and it was working for us.”

The Knights tacked on two more runs in the second inning. Pietrzykoski doubled with two outs, then scored when Greaney followed with an RBI double. Elia Namey scored Costello, who again ran for Greaney, with an RBI single.

North Penn broke the game open with a five-spot in the fourth inning. No. 9 hitter Sophia Collins got it started by crushing a leadoff double to center and scored when Pietrzykoski laced her third hit of the day for an RBI single following a Juckniewitz walk.

Greaney was intentionally walked to load the bases, but a fielder’s choice led to a force out at home and an interference call on another fielder’s choice sent a runner back to third and two outs on the board. Carely DiGiuseppe was hit by a pitch to bring in a run and an error off Volpe’s bat scored two more to give the Knights a 9-0 advantage.

“We came out with an attitude of hitting the ball hard and hitting it on the ground and it’s exactly what we did today,” Torresani said. “(Whitehall) is a good team, I watched them against Parkland but if we hit the ball on the ground, this team can hit and they did what they were supposed to do.”

SOFTBALL END 4: North Penn 9, Whitehall 0
Lizzy Stark singles in another run. Second run thrown out at home for last out but only after Knights put up five pic.twitter.com/peOUOw9vnH

With the way Volpe was pitching, one run would have been enough. The sophomore’s first eight outs came via strikeouts, Whitehall didn’t put a ball in play until the end of the third inning and she retired the side in order on four different occasions.

“Mady’s special, we don’t get a whole lot of defensive work because she’s very dominant in the circle,” Pietrzykoski said. “It’s great for us, but when we do get those plays, we love to make them and back up our pitcher.”

Abbey Reese broke up Volpe’s no-hit bid with a leadoff single in the fifth, but the Knights righty struck out the next three batters. Mostly, she just had the Zephyrs hitters swinging late and chasing the rise ball.

“We’re our own competition,” Volpe said. “We come out strong no matter what. Even in the district championship game, being down 2-0 after the top of the first inning, we showed we can come back and compete at the level we needed to.”

SOFTBALL FINAL: @NPsoftball 9, Whitehall 0
Mady Volpe throws a one-hit complete game, striking out 15
Knights lineup got contributions up and down as they advance to state quarterfinals pic.twitter.com/9FOoLF8xL0

North Penn will face either District 3 champion Central Dauphin or District 7 runner-up North Allegheny in the quarterfinal round, meaning they’ll likely have a much longer trip on Thursday.

Regardless of whether the Knights were fielding or batting, their reserve players were right at the fence with a stream of constant support.

“That’s who we are as a team,” Volpe said. “We’re a team that hustles, a team that goes hard for everything no matter what, if the score is 9-0, we’re losing or we’re up, you can’t tell if we’re winning or losing and I think that’s a really special quality for a team like this.”