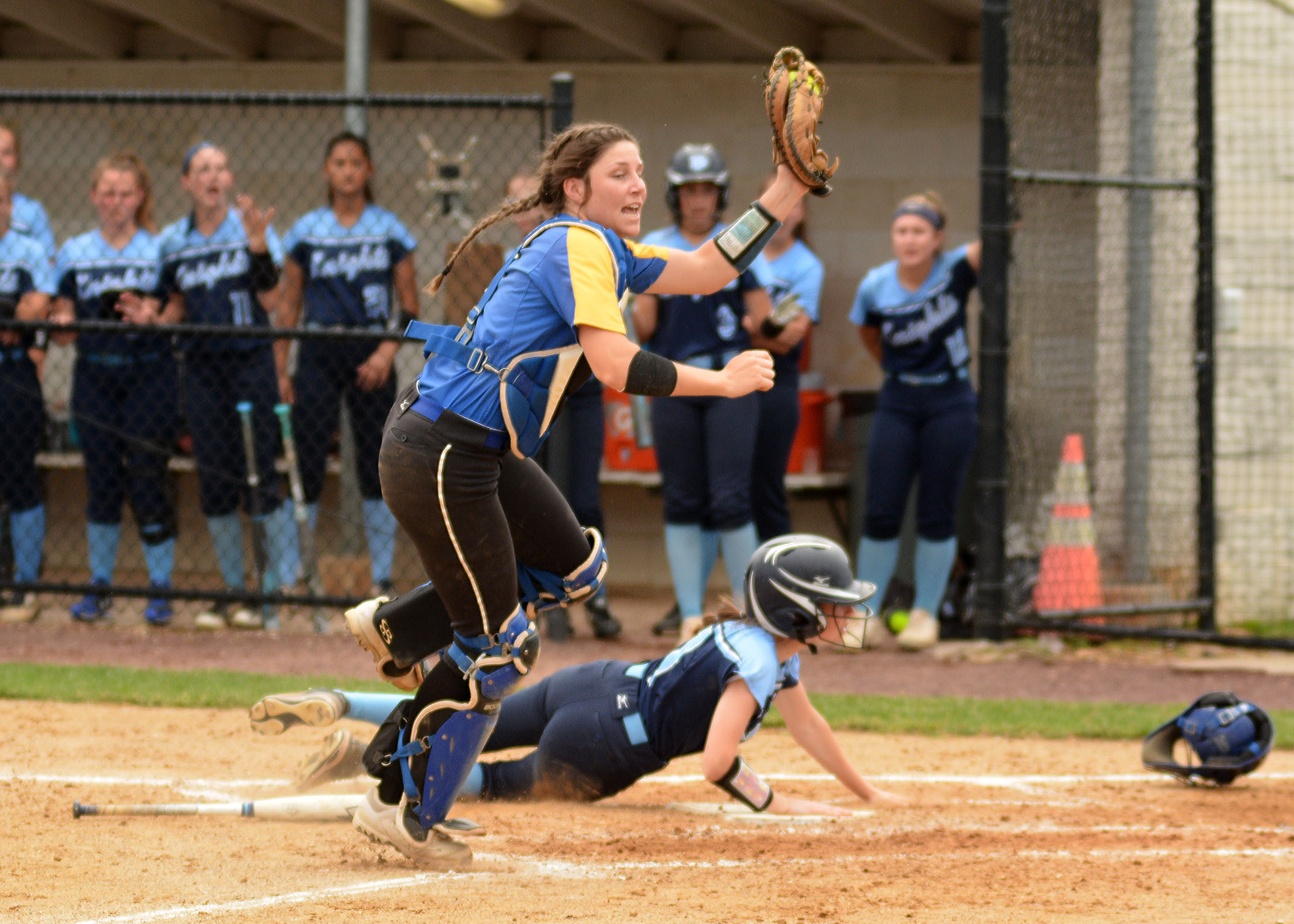 EAST WHITELAND >> For an inning, it looked like the North Penn offense would be just fine.

After Downingtown West had jumped out to a quick lead in the top half of the first inning, the Knights were primed to answer right back and maybe get more. North Penn got one, but a sterling defensive play by the Whippets heled the Knights there.

After that, No. 4 Downingtown West and pitcher Natalie Beebe quelled No. 2 North Penn to claim a 3-2 win and the District I 6A softball title at Immaculata University on Thursday.

“We were trying our best to read the ball out of the pitcher’s hand,” Knights first baseman Elia Namey said. “It was a really nice changeup, but we tried to fight it off so we could get a pitch we liked. A few of us did, but a few of us couldn’t get a piece of her like we wanted to.”

North Penn’s Mady Volpe pitches during the District 1-6A final against Downingtown West on Thursday, May 30, 2019. (Bill Rudick/For MediaNews Group)

Beebe held North Penn to just six hits and mixed a supremely effective changeup with her fastball and good location to baffle the Knights hitters and deny the Knights their first district title since 2012. The junior right-hander, who helped the Whippets knock off top-seeded Spring-Ford in the semifinals before taking down the Knights, also had some strong defense behind her.

Senior catcher Cait Coker, who had two doubles offensively, made a key tag on an inning-ending double play in the first and as she’s done all year, called every pitch in the game. Whippets coach Joey Germani said Coker and Beebe picked up early that the changeup could be a good pitch to lean on.

“(Beebe) does a great job of hitting her spots at different speeds and she and Cait just work amazingly together,” Germani said. “They were swinging aggressively and that’s one of the ways Nat can throw a ball for a strike. We had to keep them off-balance, but I was emphasizing it in our huddles to get them to swing over it because they were swinging pretty hard.”

Downingtown West, which claimed its first district softball trophy since 1998, got all the offense it needed thanks to Coker and third baseman Taylor Posner. Coker, who was also terrific behind the plate, led the game off with a long double and came in when Posner launched an offering from Knights pitcher Mady Volpe over the fence in straightaway center for a two-run shot.

SOFTBALL END 1: @WestSoftball17 2, @NPsoftball 1
Knights get one on Namey RBI double
Whippets get a double play to end it when Sinkus throws out runner at home pic.twitter.com/jgRThkFKzS

The duo combined for another run in the third inning when Coker again led off the inning with a double and moved to third on Nina Gallagher’s sac bunt. Posner didn’t go yard again, but she got enough of a pitch for an RBI single that put the Whippets up 3-1.

“Cait Coker is the best hitter I’ve ever had and she set the tone for our offense,” Germani said. “Her and Taylor have had great at-bats the last two games.”

Down 2-0 after the first half-inning, the Knights did rally. Second baseman Jordan Pietrzykoski legged out an infield single to start a one-out rally. Catcher Amanda Greaney singled and Namey came through by ripping an RBI double into left-center.

“Myself and Amanda, she was really working the outside corner but all the other girls, she was working the inside corner,” Namey said. “A few of them were getting jammed. I’m still proud of all of them, they did their best to stay with her.”

North Penn’s Gianna Costello slides into third base during the District 1-6A final against Downingtown West Thursday, May 30, 2019. (Bill Rudick/For MediaNews Group)

Knights third baseman Jamie Beer hit a rope to center, but Whippets freshman center fielder Meghan Sinkus came up clutch. She first snared the ball out of the air for the second out and fired a strike home with Coker applying an athletic tag to negate the sac fly and end the inning on a double play.

“That was definitely big because they had runners on second and third, so it was a momentum shifter,” Germani said. “We play through emotion a lot too, we dealt with a lot of adversity in our Spring-Ford game too but we faced it pretty well.”

Volpe settled into the game well after the first inning. The sophomore right-hander allowed just one hit after Posner’s third inning single, struck out 10 and stranded six runners during the game.

Offensively, she nearly tied the game in the seventh inning, crushing a pitch just a few inches foul of the pole in left field.

“We have such great leadership this year, it was our job to try and keep everyone up and I felt like we did a really good job of it,” Namey said. “We tried to keep the girls up, it just wasn’t our day.”

Beebe won a couple of key duels at the plate throughout the game to keep North Penn off-balance. She jammed Greaney into a pop-up to end the third inning and retired leadoff hitter Victoria Juckniewitz and Pietrzykoski back-to-back to open the bottom of the sixth.

A thunderclap a few minutes after the game prompted Immaculata officials to usher both teams off the field immediately with North Penn in the midst of presenting runner-up medals and Downingtown West awaiting its district title trophy. The Whippets made up for it with a fire-truck escort back to the school and received their medals together in the cafeteria after a pretty boisterous bus ride.

“I told them we had the toughest road and we just battled unbelievably well, especially being the away team in both scenarios,” Germani said. “That ride home was lots of fun. There was a lot of singing, a lot of dancing on the bus then the fire engines bringing us into tow was pretty sweet.”

North Penn’s Madison Reilly makes a catch during the District 1-6A final against Downingtown West on Thursday, May 30, 2019. (Bill Rudick/For MediaNews Group)

Both teams advance to the state tournament and as the runner-up, the Knights will be placed in the western half of the bracket. North Penn will face the District 11 runner-up in Monday’s first round at a site and time to be determined.

“From here, we’re just going to get in a lot of (batting practice) and be ready for Monday,” Namey said. “That’s been our goal the entire year, states.”