Down to last out, Springfield gets the call to advance 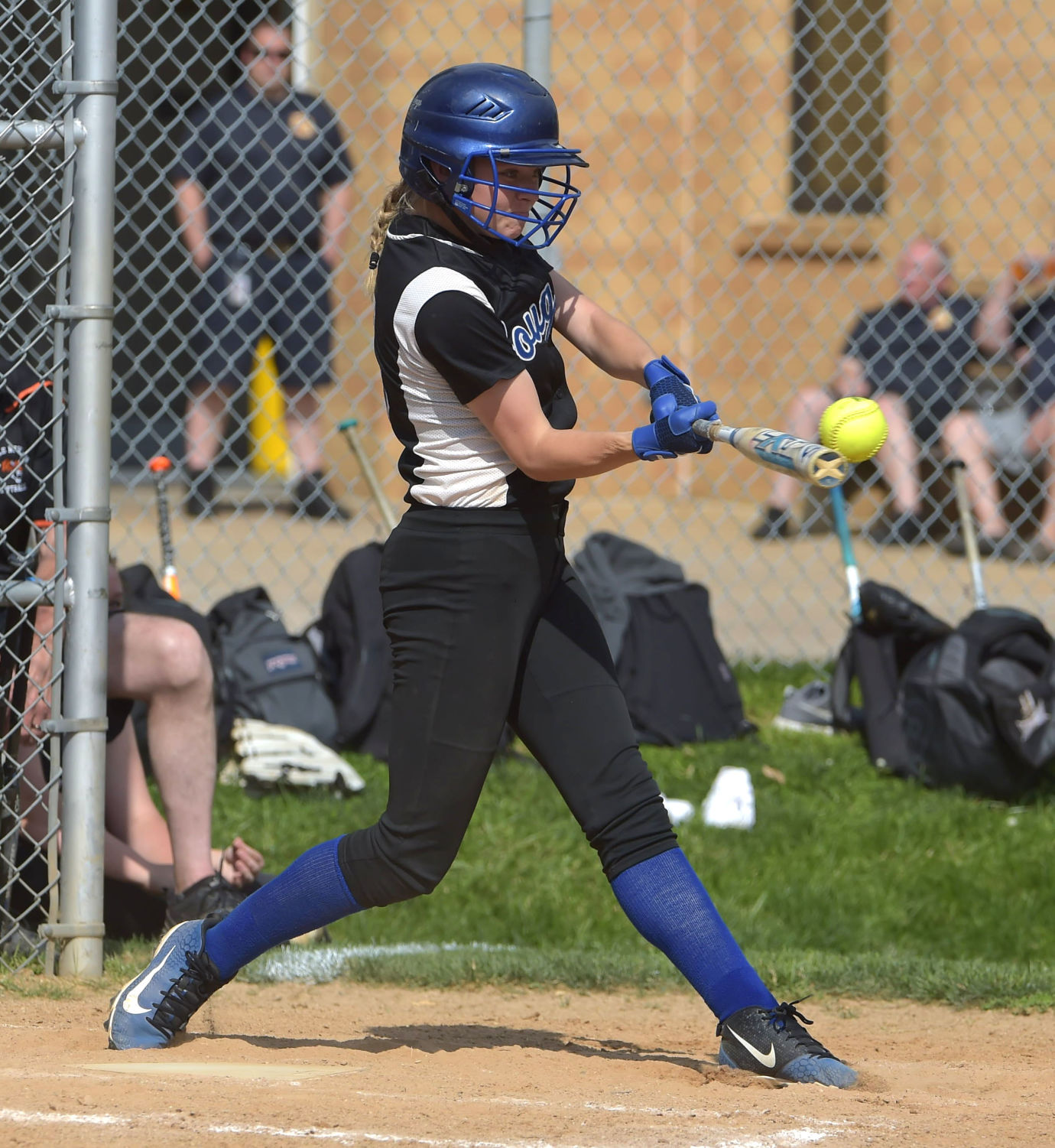 Springfield's Lanie Morris, connecting on a hit in the first inning Monday, started a two-out rally in the bottom of the seventh as the Cougars walked off with a 5-4 win over Marple Newtown in the first round of the District 1 Class 5A tournament. (PETE BANNAN/MEDIANEWS GROUP)

SPRINGFIELD — Kaitlin Siddons didn’t know whether to jump for joy or hang her head in despair.

She, like everyone else in attendance at Springfield’s Veterans Memorial Park, was forced to wait for the umpires to make the call.

Let’s set the scene. No. 7 Springfield was down to its final out in the bottom of the seventh, trailing 10th-seeded Marple Newtown by a run in a District 1 Class 5A first-round tournament game. Sam Ciasullo popped up in foul territory, and Jordan Galloway grounded out to shortstop to begin the inning.

It was up to freshman Lanie Morris, who reached base with a bloop single. Next, Jill Condi worked a walk, then Casey McAnally poked a single the opposite way into right field, scoring Morris to tie the game.

Siddons had the chance to be the hero. She ripped a liner up the middle to the shortstop and raced to first base. The throw by Lindsay Walsh was a tad high, forcing first baseman Abby Layden to stretch off the bag. Layden tried to swipe Siddons on the back of the helmet, hair or jersey. Everyone on Marple Newtown’s bench thought Siddons was out, and everyone on Springfield’s bench thought she was safe. The umpires convened.

After a few moments, umpires ruled safe. Siddons was mobbed at first base by her teammates as Springfield celebrated a 5-4 victory.

“I knew I was safe, but with the umps, it doesn’t always work out the way you think it’s going to,” Siddons said. “It’s exciting especially since everyone is kind of on edge already. Once we found out the call, everyone ran out on the field and it was probably one of the most exciting experiences I’ve ever had playing softball.”

“They didn’t see the tag,” coach Mike Snow said when asked what the umpires told him. “I thought everyone saw the tag, I certainly thought I saw the tag. What are you going to do? You can’t be mad about it. It’s in the past now. The umpires are doing the best they can, they’re human. It’s a tough way to lose.”

Springfield will play No. 2 Bishop Shanahan in the quarterfinal round Wednesday. The Eagles no-hit 15th-seeded Strath Haven, 9-0.

No matter what happens, this was a win that Siddons and the Cougars can cherish for a long time.

“I think it’s about how much our team really wanted it,” Siddons said. “You could’ve just gone into it and thought we were going to lose and not play hard enough. We wanted it, we went after it, we took as much as we could and we came back. We could’ve given up, but we fought back and we can really be proud of how much we tried and came back in the end.”

Jenna Casasanto was excellent after allowing three runs in the first inning against Marple Newtown. The senior pitched a complete game with 10 strikeouts in the Cougars’ 5-4 victory. (PETE BANNAN/MEDIANEWS GROUP)

A big tip of the hat goes to Morris, the first-year softball player who got the rally started. Morris was a lacrosse player most of her athletic life before trying out for coach Todd Odgers’ softball squad. She impressed so much that she became the team’s starting catcher.

“I’m basically thinking, I don’t want to let my team down,” said Morris, whose brother, Jared, was an All-Delco pitcher at Springfield and is a rising junior at Neumann University. “I just had to think about my team and that this could be the seniors last game — and my best friend (Caitlin Chambers) is a senior, so I had to do this for her. But we’re that type of team. We’re underdogs, you could say. We will fight until we get that win.”

Chambers had three singles and a run scored. The two-hitter Chambers and leadoff batter/winning pitcher Jenna Casasanto were forced to be spectators in the seventh inning.

“It was pretty nerve-wracking and a very tense situation,” Chambers said. “We had trust that they could get on. With two outs, it was even more anxious than we thought it would be, but they all did what they needed to do and now we move on to the next round.”

Of course, the win wasn’t possible without the timely hitting of McAnally, who had the clutchest hit of them all.

“I was thinking that I really have to trust everything that I’ve worked on this season,” McAnally said. “I knew that I could do it. My mentality when I was up there was hit, hit, hit. That’s all I was thinking. I knew there was a runner on third and I didn’t have to do anything special, so I just trusted what I’ve been working on.”

Marple Newtown struck for three runs (one earned) in the first inning. Brianna Kelly and Grace Thorne collected RBI singles for the Tigers. Casasanto settled in after a shaky start and registered 10 strikeouts in a complete game.

Springfield got a run back in the bottom of the first on a sacrifice fly by Galloway. The Cougars knocked out MN starter Rachel Cowley when they began the fifth inning with four consecutive singles. Ciasullo and Galloway delivered the run-scoring knocks.

The Tigers started the season 6-0 before injuries and youth caught up to them. They won enough games to qualify for the district tournament and came one out away from advancing to the second round.

The Tigers’ walk-off loss brought back memories of their battle with Springfield in the second round of the 2014 District 1 Class 3A tournament. The Cougars won that game in walk-off style thanks to a Marple error. Springfield went all the way that spring, becoming the first and only Delaware County softball program to win a PIAA championship.

“They knew it was going to be a tough time and they came out right from the beginning, attacking and scoring runs early,” Snow said. “They were ready for the battle, but unfortunately sometimes things don’t go your way. But I’m proud of them.”

While she was tagged with the loss, freshman Kelsey Racine showed plenty of moxie in a big game. She escaped a bases-loaded jam in the fifth and only one ball hit against her — Siddons’ game-winning single, a bullet up the middle that grazed Racine’s glove — could be categorized as hard-hit.

“We’re a young team,” Snow said. “We have Kelsey, and Rachel Cowley is a junior, so we’ve got a lot of girls coming back next year at key positions. So, it’s exciting for them to get the experience so that they can translate that into next year and maybe we’ll get the home field advantage next time.”