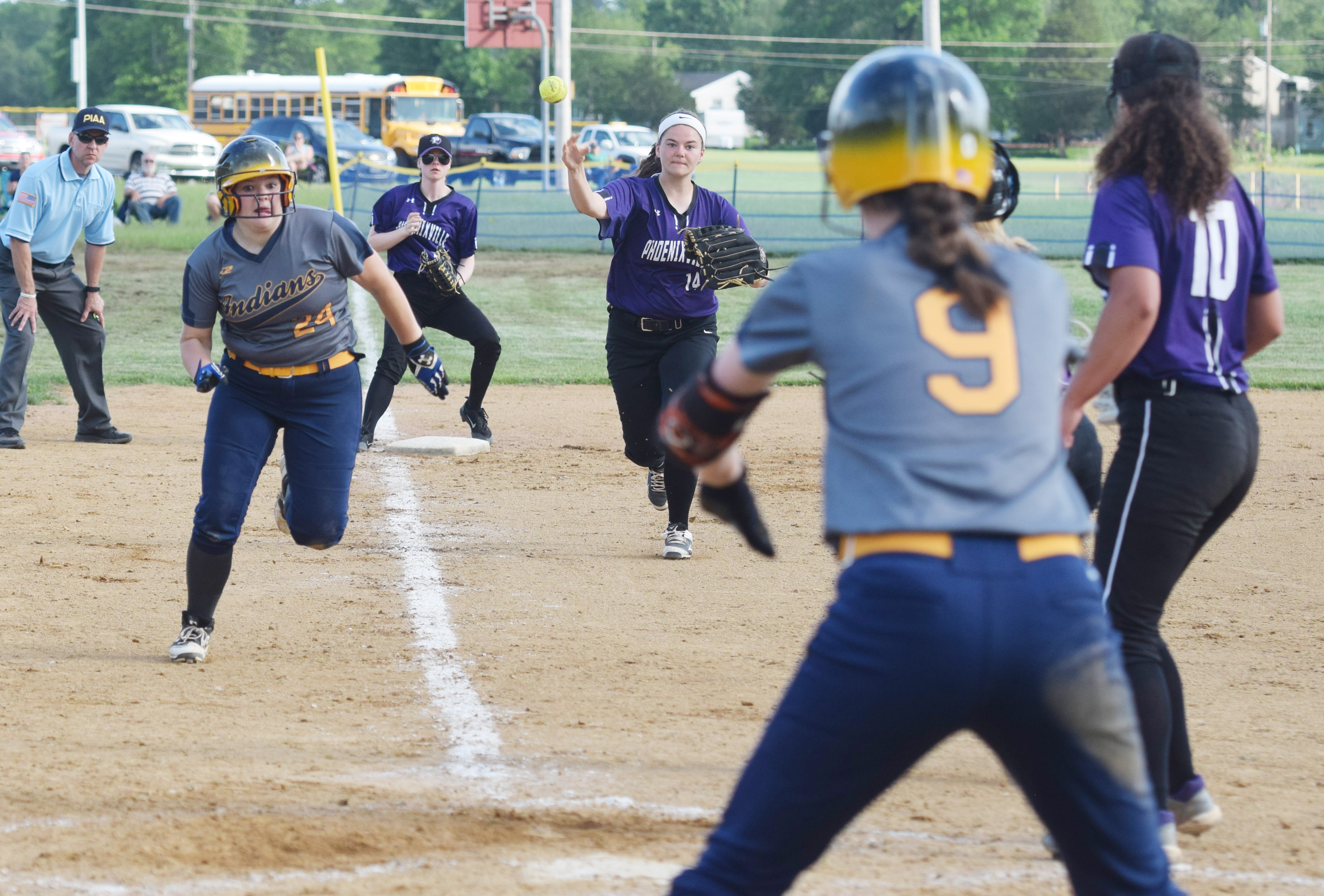 PENNSBURG >> The Phoenixville and Upper Perkiomen softball teams took turns looking like their seasons were finished.

After seven topsy-turvy innings of a District 1 Class 5A first round game Monday, the Phantoms and Indians both proved looks can be deceiving – they were both alive.

An inning later that was no longer the case as sophomore right fielder Jenna Sullivan’s RBI single – part of her 4-for-4 day – scored Alexa Banner and gave Upper Perkiomen a 10-9, eight-inning victory over Phoenixville to advance to the second round of the district playoffs.

No. 4 seed Upper Perk (15-7), playing up in 5A this year after winning the 4A title in 2018, meets No. 5 Upper Dublin – a winner over Chichester Monday – in the second round on Wednesday in Pennsburg.

Jenna Sullivan single wins it for Upper Perkiomen, 10-9, over Phoenixville in District 1 5A softball first round pic.twitter.com/wBcxTiz5mr

It was Upper Perkiomen’s third win over Phoenixville this season, but without question its wildest one. The Indians looked in trouble but rallied from 7-3 down in the fifth inning, tying the game 7-7 after four Phantoms’ defensive miscues. UP then took a 9-7 lead an inning later, only to see the Phantoms rally with two runs in the top of the seventh on double from Kendall Brown and Aubrie Breisblatt and a Chloe Johns’ RBI single (two hits, two RBI) to force extras.

Upper Perk pitcher Lily Dibble came up with the goods in the eighth inning with a 1-2-3 frame with every play being made by sure-handed freshman shortstop Dani Freer (triple, 3-for-4, two RBI), setting up the Tribe’s winning moment.

In the top of the eighth, Banner (2-for-5) hit a one-out single up the middle and stole second base. A pitch later, Sullivan was driving her fourth hit into the outfield and bringing home Banner for the game-winner.

“I was struggling toward the middle of the season. But I just had a lot of confidence this game coming off the last couple games,” Sullivan said. “I had a couple good hits and that’s all I needed to get me started again.”

It gave the pitching win to Dibble, who went eight innings, allowing nine runs (six earned) on 16 hits with four strikeouts and a walk. Dibble has stepped up in a tough spot for the bulk of the season after season-opening No. 1 pitcher Taylor Croak was lost to an ACL injury in the early going.

While some teams can overlook an opponent they’ve already beaten twice, Upper Perk went the opposite way.

“It’s hard to beat someone three times. The last few games we played them it was closer and closer and this game they could maybe come out with a win this time,” Sullivan said.

“At first I was kind of scared because they saw me two times before,” Dibble said. “I was nervous that they’d be hitting it all over, but I just used all my pitches to keep them off-balance.”

No. 13 seed Phoenixville ends its season with a 9-12 record but had reason to feel optimistic about its future after pushing the Pioneer Athletic Conference Frontier Division’s top team in recent years.

“These kids have grit,” said Phoenixville coach Claire Emplit. “They battle and battle, and they’re young, too. So we have some developing to do and I think with a little more experience this team will have a lot more success. I really look forward to their future with a young team only graduating two seniors we have a lot of potential.”

Kendall Brown took the loss after going 7 1/3 innings, allowing six earned runs on 10 hits with six strikeouts and three walks, a somewhat misleading line after the sophomore left-hander allowed Upper Perk very few hard-hit balls. But as the game progressed, the Indians made contact with increasing quality, allowing them to turn a 7-3 deficit into a 9-7 lead.

The lead came in the bottom of the sixth after Gail Kooser and Sullivan singled, reaching second and third before Morgan Lindsay’s sacrifice fly scored Kooser. Freer’s triple brought home Sullivan for the two-run advantage.

With a lineup filled with freshmen and sophomores, Upper Perkiomen understandably hasn’t been the force it was last season when it was District 1 Class 4A champion and made the PIAA Championships. But Monday showed the Tribe aren’t ready to pack it in, even when starting a sizable deficit in the face.

“I was confident enough that I knew we could win it,” Dibble said. “We’ve all played for a long time and I knew what my team could do.”