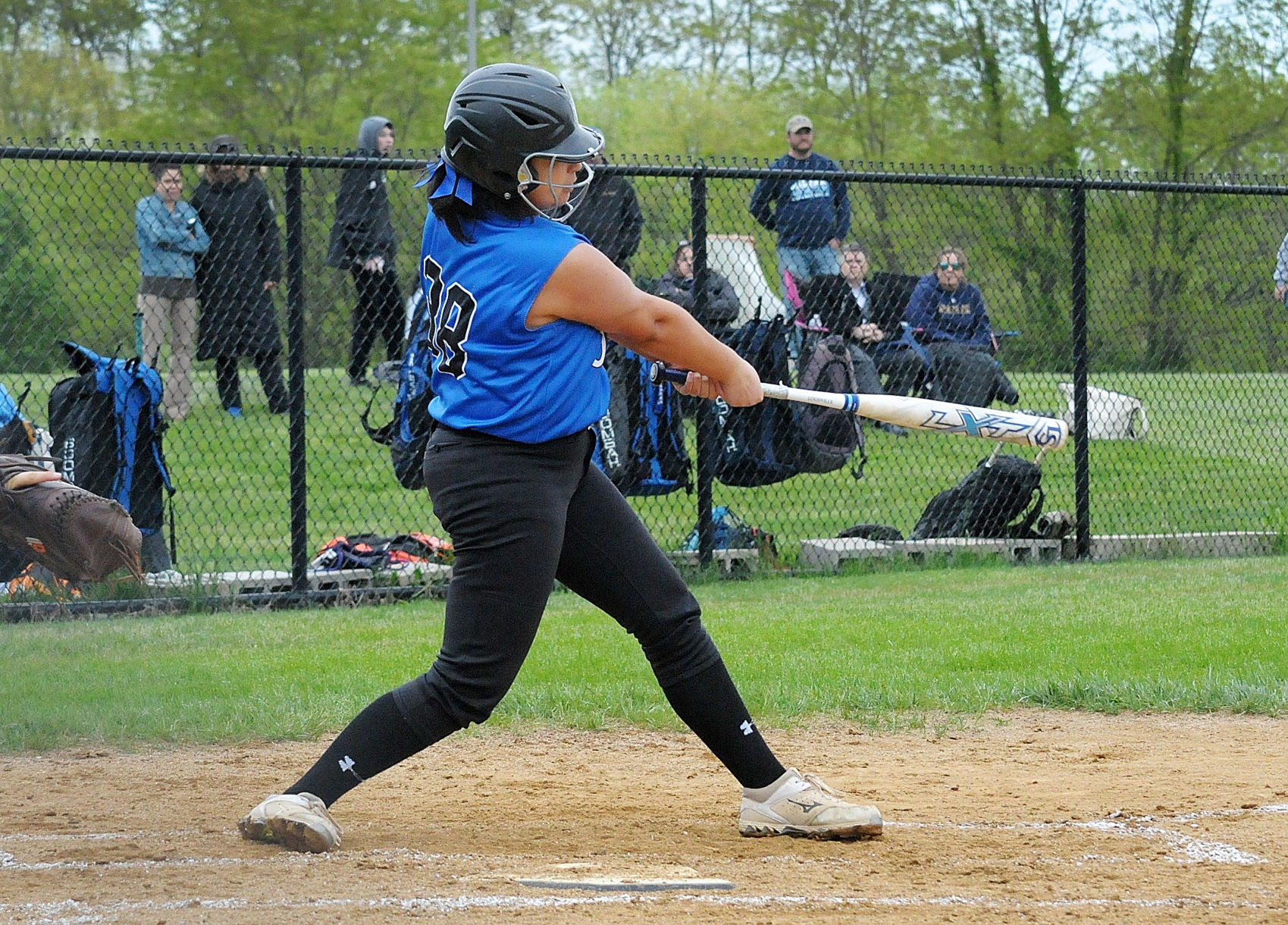 Central Bucks South’s Olivia Zoolalian at bat during the Titans' game against North Penn on Thursday, May 9, 2019. (Gene Walsh/MediaNews Group).

TOWAMENCIN >> As far as birthday presents go, it was one of the best Alexa Ortman’s ever had.

The Central Bucks South center fielder’s sliding catch of a ball off the bat of Elia Namey in the bottom of the seventh inning secured arguably the biggest win of the season for the Titans and handed host North Penn its first setback of the spring. It wasn’t an easy play, but Ortman went for it because she knew she was going to get it.

Toss in a rally-starting single and it was pretty for Ortman and her teammates as they knocked off the Knights 3-1 Thursday afternoon.

“It’s a 10, yeah,” Ortman said of how the win ranked as a present. “For a split-second I thought to wait back and let it bounce to me but then I saw it stayed up a little longer and I said ‘I can catch it.’ I was happy I did that.

The programs have developed a budding rivalry in the past few seasons, so they’re always up to play each other and with South (10-7, 8-3 SOL Continental) still playing for its postseason life, Thursday’s meant a whole lot. North Penn (16-1, 10-1 SOL Continental) had already locked up the conference title on Tuesday, but every South game is one the Knight really want to win.

South pitcher Kylie Kenney was superb on Thursday, as she has been most of the season even if the results don’t always show it. The right-hander held North Penn to just four hits and when she needed to make a big pitch, she almost always delivered.

Kenney doesn’t bat, so she spent the top half of every inning throwing.

“It’s not really something I do, but it’s a cold day so I wanted to stay consistent between innings and that’s how I do it,” Kenney said. “It’s amazing to win against North Penn, we broke their winning streak but it’s another game to us. We have two more coming and we have to win them for districts.”

SOFTBALL FINAL: CB South 3, North Penn 1
Alexa Ortman makes a sliding catch in center for the final out as Knights leave two on to end game, lose for first time this season pic.twitter.com/DxzKVDh7lv

Ortman wasn’t the only player in the game celebrating a birthday on Thursday. North Penn sophomore Mady Volpe spent her 16th birthday striking out 14 batters and aside from a three-run fourth inning, keeping the Titans in check.

The Knights went up 1-0 in the third after center fielder Sophia Collins worked a walk, stole second and advanced to third on an error and finally scored on a wild pitch.

For the Knights, Thursday’s loss is not the end of the world and junior catcher Amanda Greaney felt it could benefit them in the long run. They won’t have to play with the pressure of an undefeated records the rest of the season and it’s a chance to hit refresh.

“Winning 16 games in a row, it’s tough to keep going with that mentality that we’re undefeated and we want to stay undefeated,” Greaney said. “The fact we lost, it’s a fresh start, we don’t have any pressure on us, so let’s just go and win.”

Volpe had retired the first nine batters in order, but Ortman opened the first by stinging a ball up the middle for a leadoff single. Rebecca Brennan put down a bunt, just beating the throw to first and at that point, Titans coach Kevin Rosini decided to get greedy.

“We got the bunts down which was nice, but then we got hits out of them and we’d been struggling this year to move runners and make plays we normally should,” Ortman said. “It was great. We came into this one ready to play, we’ve had this rivalry for years and we wanted to go out with a bang. I think they all wanted to get the win for my birthday.”

Tara Tumasz put down a great bunt for an infield single to load the bases with nobody out. Second baseman Katie Hines hit into a groundout, but it was enough to score Ortman as the tying run and bring up Olivia Zoolalian.

Zoolalian said she’d been slumping the latter part of the season but she had a good read on where the ball was going to be as she dug in to the batter’s box. The Titans’ DH made the most of it, looping a double to right field that scored a pair of runs.

“I knew what to expect,” Zoolalian said. “It was an outside pitch and I knew I had to take it out, that’s what I was expecting. I knew where the pitches were going to be from other people telling me, so that was my goal.”

North Penn’s Elia Namey fields a bunt and throws to first during the Knights’ game against Central Bucks South on Thursday, May 9, 2019. (Gene Walsh/MediaNews Group)

North Penn had chances, with the Knights putting two runners on in the bottom of the fourth and again in the fifth, but Kenney escape without harm both times.

“I can’t remember the last undefeated team that won districts or states, so we’ll go from there,” North Penn coach Rick Torresani said. “I remember Parkland coming in here, I think in 2015, and we beat them 2-1 on a walkoff. Their coach said it was ‘the best thing that ever happened to us.’ We forgot how to lose and when you forget how to lose sometimes you need that lose to remember what got you to where you were.”

With two outs and runners on the corners in the bottom of the seventh, Kenney knew she had to get one more out. The only problem was, she had to do it against one of the Knights’ best hitters in Namey.

Kenney thought she had made a mistake off the bat, but the birthday girl in center field had her back.

“That girl can hit,” Kenney said. “I was just trying to hit the corners, they weren’t hitting the outside this time so I was trying to paint the outside corners but she got a piece of it, obviously. Lexi made an amazing catch to save the game.”