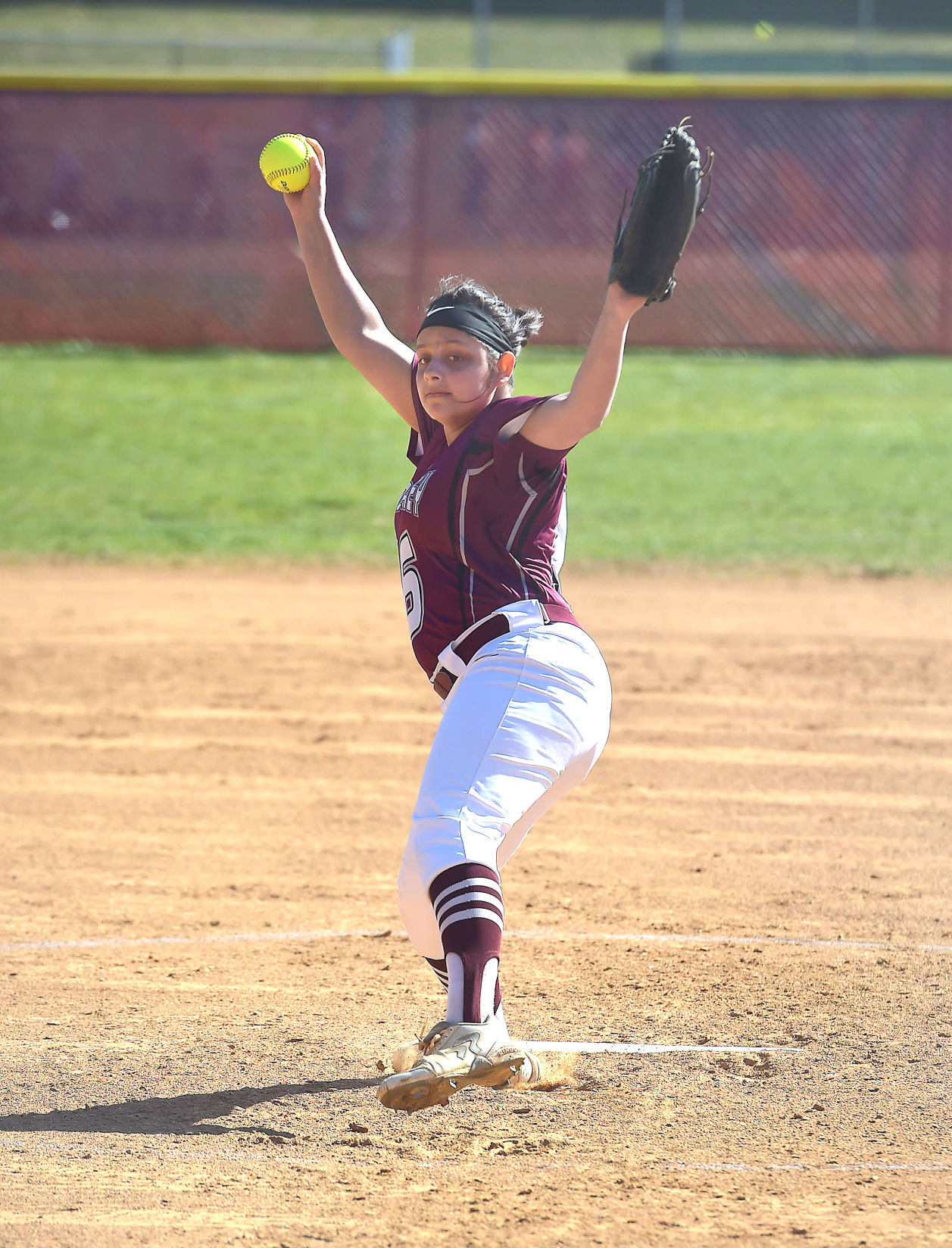 Garnet Valley pitcher Becca Halford, seen pitching in a game against Harriton earlier this season, cooled down Haverford's hitters and knocked in a game-tying run Wednesday in what became a 5-1 Jaguars victory in eight innings. (Digital First Media/Pete Bannan)

HAVERFORD — Seemingly on the verge of a third straight outright Central League softball title Wednesday, Haverford was poised to celebrate.

The Fords’ would-be winning run was on second base, there were two outs in the bottom of the seventh inning and their most dangerous batter was at the plate.

But this wasn’t the same Garnet Valley team the Fords defeated earlier in the season. This was the relentless, smoking-hot squad that keeps coming at you like zombies in the Walking Dead.

First, Jaguars pitcher Becca Halford got Ali Murphy to line out to short for the final out in regulation, stranding Anna Mefford at second.

With two outs in the top of the eighth inning, the Jaguars erupted for five runs to secure a 5-1 triumph, extending their winning streak to 11 games.

“That’s the way it’s been this year,” coach Alie Alkins said. “We’ve got that fight in us. It’s heart-wrenching but these are the games that you live to play and coach in. They’re going to be so excited on the way home.”

Dianne Torregrossa singled to right and reached second on an error to start the triumphant rally for the Jaguars (15-3, 12-3).

Emma Taylor was throwing smoke to Audrey Shenk, who fouled off several pitches, but on a 1-2 count drilled a shot to left, plating Taylor with a triple.

The rest of the inning was “crazy,” to borrow the verbiage of Alkins.

After the Fords intentionally walked Lindsey Hunt, Kelly McLaughlin hit a blooper that scored two runs. The way Halford was throwing, it was all over but the math.

“We’ve talked about it all year long, just how much of a team they are, how they’ve come together,” Alkins said. “Everybody did big things there. That was awesome. And Becca was so hungry for this win. She came up with the big hit to tie the game and get us to the extras.”

The Fords (15-4, 14-2) were stunned. Except for a one-out single by Amber Moscoe, they had no answer for Halford, who faced just three batters in the last of the eighth.

Halford got stronger as the game wore on, the junior particularly focused after knotting the score in the fifth inning with an RBI-single.

“It got a lot of white,” Halford said of the pitch she swung into. “It was definitely down the middle of the plate. I tried to take advantage of it. We’ve been playing so well as a team. Everyone can hit in in our lineup and our defense is amazing.”

Halford and the defense limited Haverford to seven hits, which isn’t easy because the Fords run the bases like a record-setting relay team. They tried it all Wednesday, from swinging bunts to swats and then some.

“They’ve got some kids that can hit the ball over the fence,” Fords coach Bob Newman said of the Jaguars. “We’ve got maybe one or two that have ever done it. But we have five or six kids who can really run. We had a couple close ones at first base today that we were hoping to get but that’s the way it goes. But our speed is what makes this team special. We’re in good shape. Obviously, we wanted to win it here and that would have been all exciting and stuff, but these kids are unbelievable. I really thought we were going to win it in the bottom of the seventh.”

The Fords, who had won seven straight games entering this one, will have a tough time putting this loss behind them, though they’ve clinched at least a share of the Central League title with Conestoga.

The Jaguars, on the other hand, are the team you don’t want to play right now. Red-hot, they can’t wait to put their uniforms on.

“This is huge, this is probably our biggest win,” Shenk said. “We played them at the beginning of the season and they beat us pretty well. But we’ve been on a winning streak. We’ve been playing very well coming into this game. They have a pretty good record. They’re first in the Central League. We knew what we had to do. It was a big game for us.”

Mathematically the Fords, Pioneers and Jaguars could finish in a three-way tie for the Central League championship. The Jaguars would have to defeat Upper Darby while the Fords lose to Lower Merion, and the Pioneers would be beaten by Ridley and Radnor. Not real likely.

Beyond that, Garnet Valley and Haverford may not have seen the last of each other. They’re jockeying for position in the District 1 Class 6A playoffs.

“We’re fourth in the district,” Newman said. “There were three undefeated teams ahead of us. We’re in a good spot there. Garnet Valley was eighth. So, they’ll probably move up. We may move down. But we’re in good shape.”