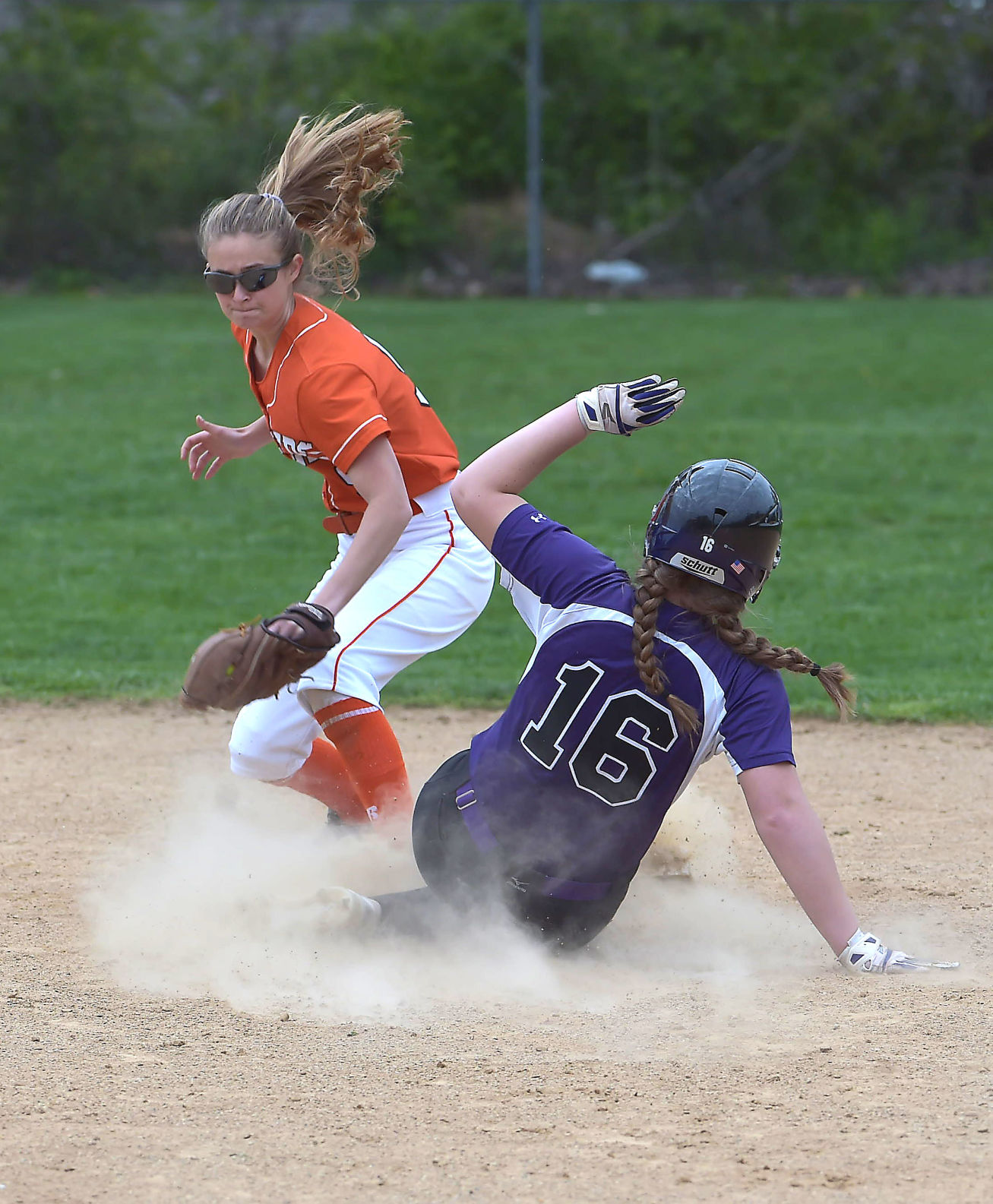 Marple Newtown second baseman Lindsay Kane, left, can't get tag down in time as Upper Darby's Nora Zakrewski slides into second base with a double in the sixth inning of the Royals' 6-3 victory over Tigers Monday afternoon in the Central League. (PETE BANNAN/MEDIANEWS GROUP)

Lindsay Kane had a triple for the Tigers.

Upper Darby third baseman Camryn Young knocks in a run in the first inning of a 6-3 victory over Marple Newtown Monday afternoon.

Haverford 13, Springfield 10 >> Springfield had the bases loaded in the seventh inning until Haverford catcher Farrell Evereth threw out the runner leaning too far off third base.

Rachel Yocum fueled the Fords (11-3, 11-1) offense with a single, a triple and three RBIs. Amber Moscoe went 3-for-5 with a trio of RBIs and Mel Falotico smacked a double.

Caitlin Chambers had a triple for the Cougars.

Garnet Valley 13, Penncrest 0 >> Morgan Mesaros, who missed most of the season due to injury, came through with two hits, including a double, two RBIs and a walk to help the Jags win big.

Conestoga 13, Strath Haven 4 >> The Panthers scored two runs in the bottom of the first inning, and led 2-1 going into the fifth, but the undefeated Pioneers scored 12 runs over the final three innings. Claire Overton belted a home run and scored three runs for ‘Stoga.

Audrey Kochanowicz went 1-for-3 with two runs scored and a pair of stolen bags for the Panthers. Brooke Bender clocked two hits, including a double, and drove in two runs. Vaughn McHugh added a single and a run scored.

Radnor 6, Lower Merion 3 >> Freshman Lilah Demmy went the distance and fanned for her first varsity win. She also doubled and scored in the second inning and singled home a run in the third. Audrey Rosenblum pitched in with two hits and two runs scored for the Raiders. Sophie Royle and Emma Dalkin scored and drove in one run each.

Sun Valley 9, Great Valley 6 >> Madison Koons had a big day at the plate for the Vanguards, hitting a homer and a double to drive in four runs. Brianna Lawson, who was the winning pitcher, roped a pair of doubles and drove in two runs. Gianna Daley and Kylie Kane each collected two base knocks for Sun Valley.

Upper Darby second base Rylee Shanahan snags a pop up in the fourth inning of a 6-3 victory over Marple Newtown Monday afternoon. (PETE BANNAN/MEDIANEWS GROUP)