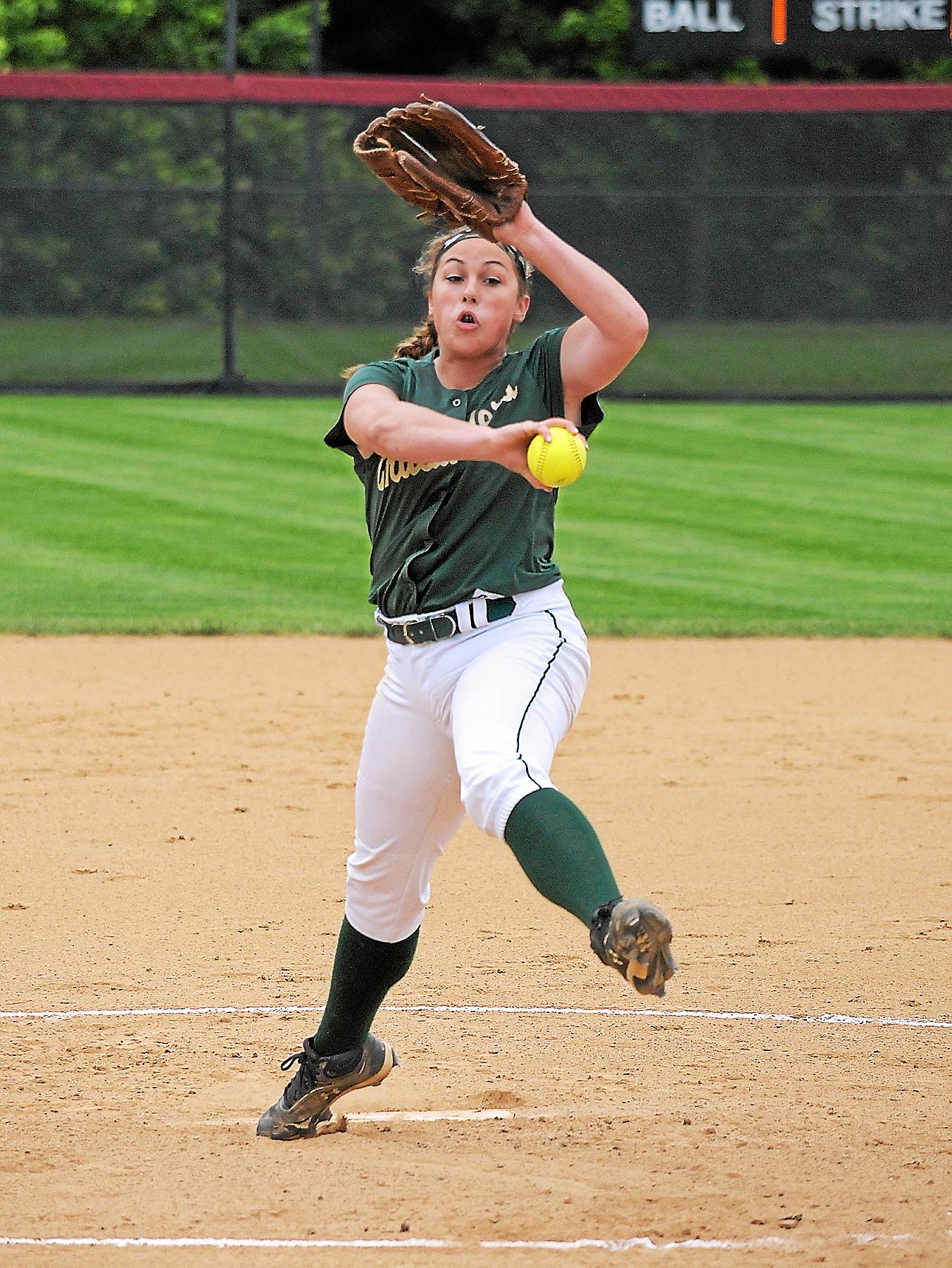 Lansdale Catholics Mary Picozzi on the mound game against St. Hubert in the PCL semifinals at Arcadia University on Tuesday, May 23, 2017. (Gene Walsh/MediaNews Group)

She knows it’s going to happen and she has a lot of confidence in the hitters behind her, but it definitely feels better to get a chance to swing the bat. Thanks to the batters in front of her Thursday, Picozzi got a couple chances to swing away and she made the most of them.

The Lansdale Catholic junior blasted a pair of home runs plus a double, collected six RBI and threw a complete game as the Crusaders bested host Archbishop Wood 14-6 in their PCL clash.

LC was playing for the third time in four days this week, but the Crusaders found the energy to compete in their bats. Megan Burns got the game started with a single and while she was thrown out trying to take an extra base on Paige Paciolla’s single, Picozzi made sure the Crusaders cashed in by blasting a two-run homer to left field.

Wood’s aggressive base-running helped the Vikings cut the lead in half in the home portion of the first inning, but Picozzi got two outs to leave the tying run at third base. When LC and Wood play in any sport, it’s a big rivalry game and the Crusaders knew they couldn’t just sit on a couple good swings in the first inning.

“No matter how far ahead you are, you always want to keep hitting the ball because you never know, some girl could come in and hit a grand slam or something,” Burns said. “Just like that, they have a 4-2 lead and we could go into a slump, so you just want to keep hitting and hitting until the game’s over.”

The final score was certainly sided in Lansdale Catholic’s favor, but the Vikings showed a lot of fight throughout. Wood loaded the bases in the fourth inning then plating four runs in the fifth when they needed three to keep the game going.

With just two seniors on the roster, it’s been a bit of a youth movement for Wood this season. After a tough start, the Vikings have come together of late and coach Jackie Ecker hopes they’re rounding into form for a strong finish.

“I was pleasantly surprised they fought so hard in the fifth after (leaving the bases loaded in the fourth),” Ecker said. “It’s a young team, we only have the two seniors starting but they’re really coming together. We knew this was going to be a tough game, I think Lansdale has it one through nine.”

Wood senior second baseman Jules Donchez reached base four times, scoring a pair of runs and driving in another. Third baseman Kylee Guererra had two hits and catcher Emily Boyle had a bases-clearing double in the fifth inning.

“We’re really pulling it together,” Ecker said. “They’re better at the plate, they’re more aggressive running the bases, our pitchers are getting the ball put in play and now we have to be consistent in the field.”

Burns, who had a hit in her first three at-bats, drove in a run and scored another as part of a three-run second inning keyed by Becca Tiley’s two-run double. After being shutout in the third inning, LC came back with a four-spot in the fourth thanks to an RBI double and a two-run single by Tiley, who finished the day with four RBI.

Picozzi and LC broke the game open in the fifth. First baseman Kaitlyn Leshak led off the frame with a solo home run to center and Picozzi had the big blast with a three-run bomb to left field.

The junior, who hit each of her home runs off a different pitcher, got a good-natured shove from Burns when talking about her day at the plate.

“I don’t like getting intentionally walked, I mean it is a confidence booster but the people behind me, I know they’ll hit me in,” Picozzi, who was put on first base twice, said.

“In the first inning, if we’re the away team and I’m on base and know Mary is coming up, she’s a big hitter and can always get us that home run,” Burns said. “The people behind can also get the runs in so it’s always important to help your teammates out and when you’re above them, you want to get on base for them.”

Picozzi doubles under the fence to score one pic.twitter.com/1rWi8yUY6G

Wood hosts William Tennent on Saturday for Alumni Day while Lansdale Catholic is off until next week. The Crusaders’ game with North Penn scheduled for Friday has been moved to May 13.

After a run to the PCL title game last year, the Crusaders find themselves vying for a top seed in the postseason this year. LC has just one league loss and sits a game behind unbeaten Archbishop Ryan and Cardinal O’Hara.

“Last season, the way it all ended, it gave us the motivation to come in and win as many as we can,” Picozzi said. “We’re hoping we can come all the way back and take the PCL championship.”

“Knowing we’re a big hitting team, we want to take advantage of our bats,” Burns said. “Everybody in this lineup can hit.”