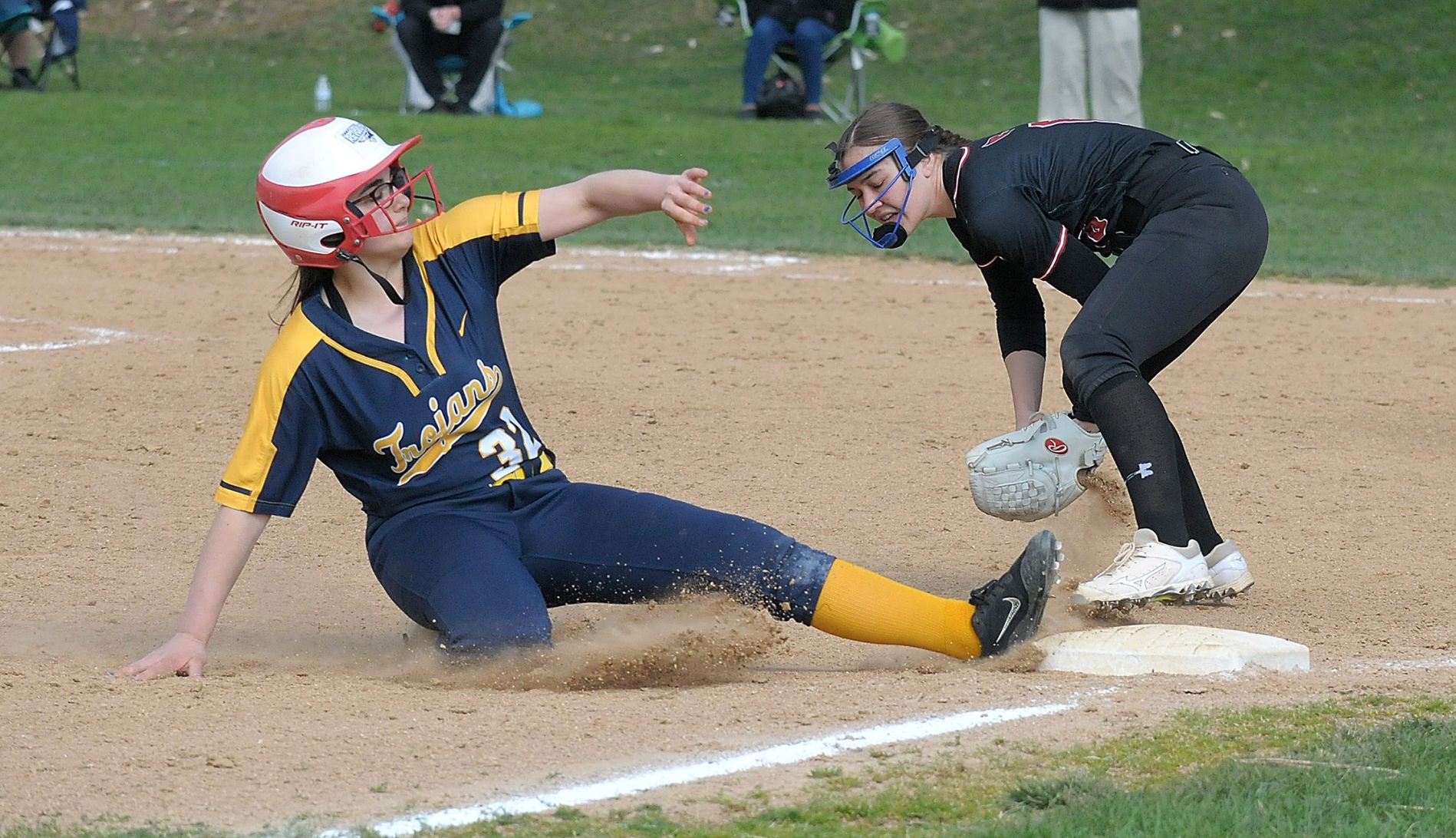 LOWER GWYNEDD >> Prior to the season, Wissahickon coach Mike Borkowski heard what pitcher Bella Harris had done on the middle-school level.

On Tuesday, the freshman provided a glimpse of what she can provide for the Trojans.

“Bella just had a nasty drop curveball today,” Borkowski said of his young right-hander. “To slow down a team that can hit like Upper Dublin is huge for a freshman pitcher.”

Harris limited the rival Cardinals to two runs off of eight hits while striking out five and walking one, helping to lead the way to a 9-2 victory in a windy Suburban One League American Conference battle. Wissahickon’s Bella Harris tosses one to the plate during the Trojans’ game against Upper Dublin on Tuesday, April 16, 2019. (Gene Walsh/MediaNews Group)

“I thought it was a good win,” Harris said of the victory, which raised Wiss’ conference record to 4-2 while evening its overall mark to 4-4.

Harris had her drop curve and drop working all afternoon.

“It was really important to keep the game going and keep everybody up throughout the game,” she said. “It just added to the momentum. It’s good to have a good defense behind me.

“It was a big win to motivate us for (Wednesday at Upper Moreland).”

A pair of RBI doubles by Macey Segal and Ashley Radell gave Wiss a 2-0 lead in its first at-bat. After Lauren Carboni tripled and raced home on the Trojans’ lone error of the day, Wiss put together a seven-run second inning. Siani Paige Miller, Radell and Harris (triple) all drove in runs, while the Cardinals made it tougher on themselves with four untimely errors, creating a 9-1 margin.

“Four errors in an inning is not gonna help when you have a team that can hit the ball hard,” said Cardinals coach Heather Boyer. “And when you leave runners on base inning after inning, that’s not gonna help either. That’s something we struggled with the last three games.

“We need that clutch hitter to step up.”

Upper Dublin (6-4, 2-4 SOL American) pushed one more across in the fifth, an RBI double by Carboni bringing in Taylor Avery to make it 9-2. Wissahickon’s Siani-Paige Miller beats out the throw to first as Upper Dublin’s Gretchen Wolpert stretches for the ball during their game on Tuesday, April 16, 2019. (Gene Walsh/MediaNews Group)

But Harris — a solid addition to a staff that includes sophomore Emma Clayborne and fellow freshman Danielle Ciliberto — retired the visitors in order in the sixth and seventh.

“She’s been pitching great,” Borkowski said of Harris. “She’s been nothing but a pleasant surprise. She’s really balanced us out.”