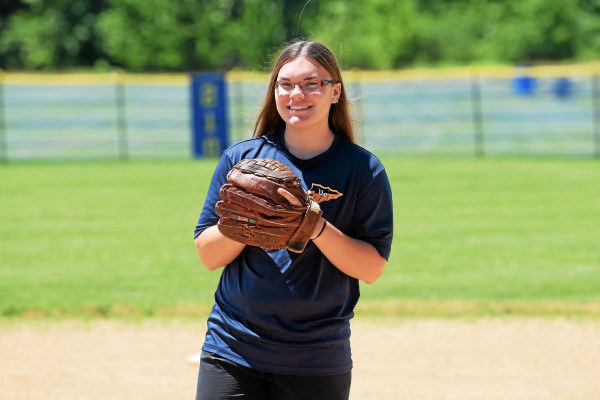 It’s no wonder why Taylor Lindsay loves going to concerts.

The recent Upper Perkiomen graduate can appreciate and relate to performing on stage.

Take her favorite band, Twenty One Pilots. Much like lead singer Tyler Joseph’s versatility with the keyboard, bass and even ukulele, Lindsay rocks with her own instruments: a ball, glove and bat.

Lindsay has probably listened to the band’s mega-hit Stressed Out hundreds of times, but wishing she ‘could turn back time, to the good ol’ days’ wasn’t the key to unlocking her success in her senior season. She got the stress out by learning to relax and taking her time on her ride.

A confident and comfortable Lindsay carried the Upper Perkiomen softball team to a runaway Pioneer Athletic Conference Frontier Division title, a repeat as District 1 Class 4A champions and return to the PIAA Championships — and carried Lindsay to the Mercury All-Area Player of the Year award.

Lindsay’s final season wasn’t so different from her junior one when she was a Pa. All-State first team selection — an honor she repeated in 2018 — but the enjoyment was.

“I just wanted to make it the best year possible I could have. I knew I wasn’t going to be playing here again after this season,” Lindsay said. “Hitting-wise, I tried to be more relaxed, and pitching I tried to not worry so much about giving up hits. Being loose made a big difference.”

More and more, she embraced her role as the figurative lead singer even as it stood in opposition of her introverted, attention-avoiding off-field self.

“I think I like it actually,” Lindsay said of the focus pitcher’s face. “Everyone’s looking at you and you’re kind of the star really. It’s totally opposite for me outside of softball.”

Upper Perkiomen’s Taylor Lindsay delivers to the plate against Nanticoke during a PIAA 4A first round game at Methacton. (Austin Hertzog – Digital First Media)

Lindsay started to unwind as a junior, but took it a step further this spring according to her sister and catcher, rising junior Morgan Lindsay.

“She’s committed already so I think she didn’t have the pressure of (college recruiting). She found herself this year, what she wants to do in college, her major, so I think she was really comfortable this year,” Morgan Lindsay said.

“She’s basically the anchor so when she’s not stressed, her pitching is on point. She kept her composure really well this year,” Morgan Lindsay said. “Especially in the district final, when it was 1-0 and one hit could screw everything up, she kept pitching great and her attitude was great.”

Lindsay had to wait to show her postseason poise after a strong 15-4 regular season and weather-related cancellation of the PAC playoffs. She was brilliant in Upper Perk’s repeat as District 1 Class 4A champion, holding Nazareth Academy to one run in a 7-1 semifinal win. She followed it up with a gutty shutout of Pope John Paul II in the title game, a 1-0 victory that made Upper Perkiomen a house of gold for a second straight year. What followed was an abrupt end to the season, a 4-3 defeat to Greater Nanticoke in the opening round of the PIAA playoffs, but one that didn’t overshadow the two-way talents of Lindsay.

The Lindsay sister combo was the centerpiece of a family-filled Upper Perkiomen squad that featured four sets of sisters.

“She knows me the best. She knows what pitches to call, knows what I like to do,” Taylor said of having Morgan as catcher. “She knows if I’m freaking out and come talk to me.”

Some of those visits were friction-filled — as anyone with a sibling can likely relate — but that relationship made the difference in the Tribe having the pressure off at the plate.

“She dominated pitching this season,” UP head coach Dean Sullivan said. “She kept us in every game, even the ones we lost. Most of the games we went into it saying, ‘If we just get two runs we should win this game, no matter what with Taylor on the mound.’

“This year I think she matured a lot and in tough situations she didn’t lose it, she kept herself composed and was able to battle through some tricky situations.”

“And when she comes to the plate, at any moment she can put one out or hit a hard one up the middle. She is one of those players that scares you to be on the field defensively. I wouldn’t want to be on the field, especially pitching.”

Indeed, many people don’t want to be in the circle with the spotlight shining. Thankfully for Upper Perk, Taylor Lindsay found her on-stage alter ego and learned to love the stage.

Members of the Upper Perkiomen softball team flock to starting pitcher Taylor Lindsay after a 1-0 win in the District 1-4A Championship. (Thomas Nash – Digital First Media)