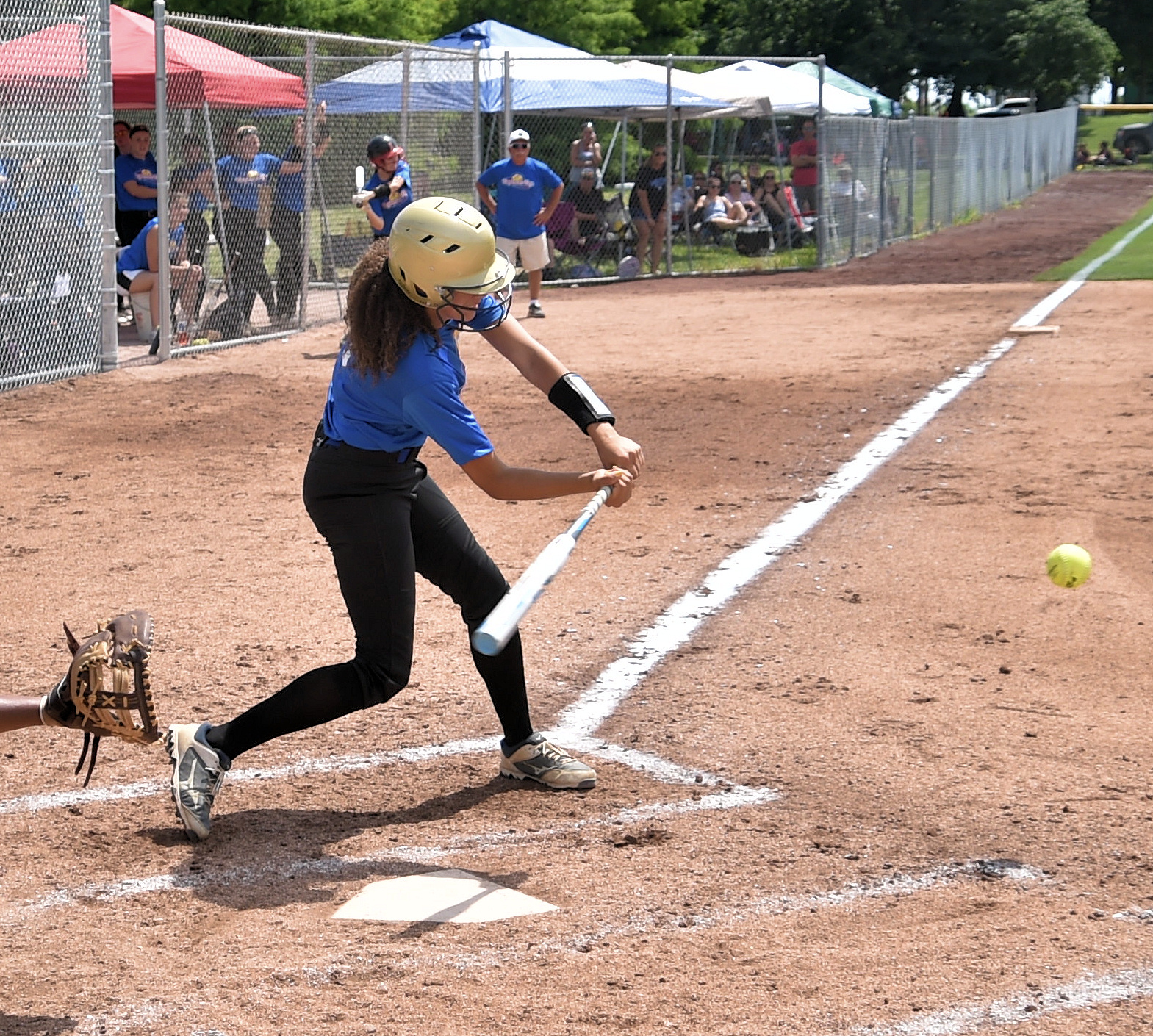 The opening game was a 5-4 win over Delaware North and the second a 12-2 loss in six innings against Delaware South.

The SOL faces the Olympic Colonial team in an elimination game Wednesday morning at 9 a.m. back at FDR Park.

The opening-round victory was a wild one.

In a 4-4 game in the bottom of the seventh inning, Central Bucks South’s Tara Tumasz reached base and advanced to second on a single by North Penn’s Elia Namey. Upper Moreland’s Brianna Hughes followed with a single down the first-base line, scoring Tumasz and sending the SOL to the winner’s bracket.

“I was just thinking, ‘OK hit the ball, make contact with the ball,’” Hughes said. “It was just a hit-the-ball kind of thing.” That base hit was only part of Hughes’ big game. The sophomore catcher finished the first game with three RBIs and a run scored.

“They were throwing a lot of outside pitches,” she said, “so taking it to right field every time also gave the runners a better chance of getting home and advancing to the next base. I was just taking it where the ball was going already.”

Namey helped the SOL battle back into the game with a game-tying RBI triple in the bottom of the fifth inning. She ripped one into the left-center gap and scored the go-ahead run to make it 4-3 SOL when Hughes followed with a groundout.

“We didn’t want to go into extra innings,” Namey said. “When the girls got on, I knew that was when we were going to hit. Then (Hughes) hit me in and we were ahead. I knew it would happen — I had a feeling.”

The SOL team did not fare as well in the second game. After failing to score in the top of the first inning, Pennridge pitcher Makenna Patterson surrendered a run in the bottom of the first and Delaware South led the rest of the way.

Patterson surrendered four runs in three innings of work. She struck out one batter, walked one and gave up five hits.

Delaware South took command of the game in the second inning. SOL right fielder Macey Segal (Wissahickon) tried to make a diving catch on a blooper with two outs. The ball got past her and turned into a three-run home run to give Delaware South a 4-0 edge. The SOL kept its deficit at four until the fifth inning, when CB South’s Alexa Ortman hit an RBI triple and scored on an error to cut the deficit in half, 4-2.

Delaware South immediately answered with a six-run bottom half of the fifth to remove any thoughts of an SOL rally.

“Once we got those two runs we felt like, ‘We got this, we can come back this isn’t too big of a lead,’” Hughes said. “Then they started scoring more. Once we got way down there it was more of a, ‘Well if we lose this game we can win the next one.’ Not going to stay put on this one game.”

Delaware South added two more runs in the bottom of the sixth to take a 12-2 lead and put the 10-run mercy rule into effect.

In all, the SOL squad managed just two hits against Delaware South.

“They had two really good pitchers,” Namey said. “I personally liked what we were facing. It was a good speed and good placement, but I don’t know, we were off.”

The SOL will now be playing elimination games the rest of the way. It plays the Olympic Colonial team at 9 a.m. Wednesday and, with a win, would be back on the field at 11 a.m.

“We’re just going to play every game — every inning — like it could be our last,” Namey said. “We’re just excited to fight back and get back to where we want to be.” The Philadelphia Catholic League was eliminated from the Carpenter Cup Tuesday with losses against Olympic Colonial, 8-6, and Delco West, 8-0.

Lansdale Catholic sophomore Mary Picozzi saw plenty of time on the mound in the two games.

In the opener against Olympic Colonial, Picozzi threw one scoreless inning.

In the second game, she threw four innings. She allowed four runs — only two earned — on eight hits. She struck out five batters to one walk.

“I thought I did really well,” she said. “The drop-curve was working well, not many people were getting a hold of that. That helped a lot. I have to work on my changeup right now, but other than that everything else was working pretty well.”

In the first game, Archbishop Carroll’s Erin Boyle had an RBI. She followed that up with two singles in the loss to Delco West. Picozzi doubled in the second game.

Despite being eliminated after two games, Picozzi enjoyed her experience at the Carpenter Cup.

“I thought it was awesome getting to know the girls from other PCL teams and to play girls who I never really play in travel or school,” she said. “It was a great experience.

“My (Lansdale Catholic teammate) catcher Becca Tiley encouraged me — she said it was a lot of fun, you get to meet a lot of new girls and so I figured with college coaches being here and everything it would be a great experience.”