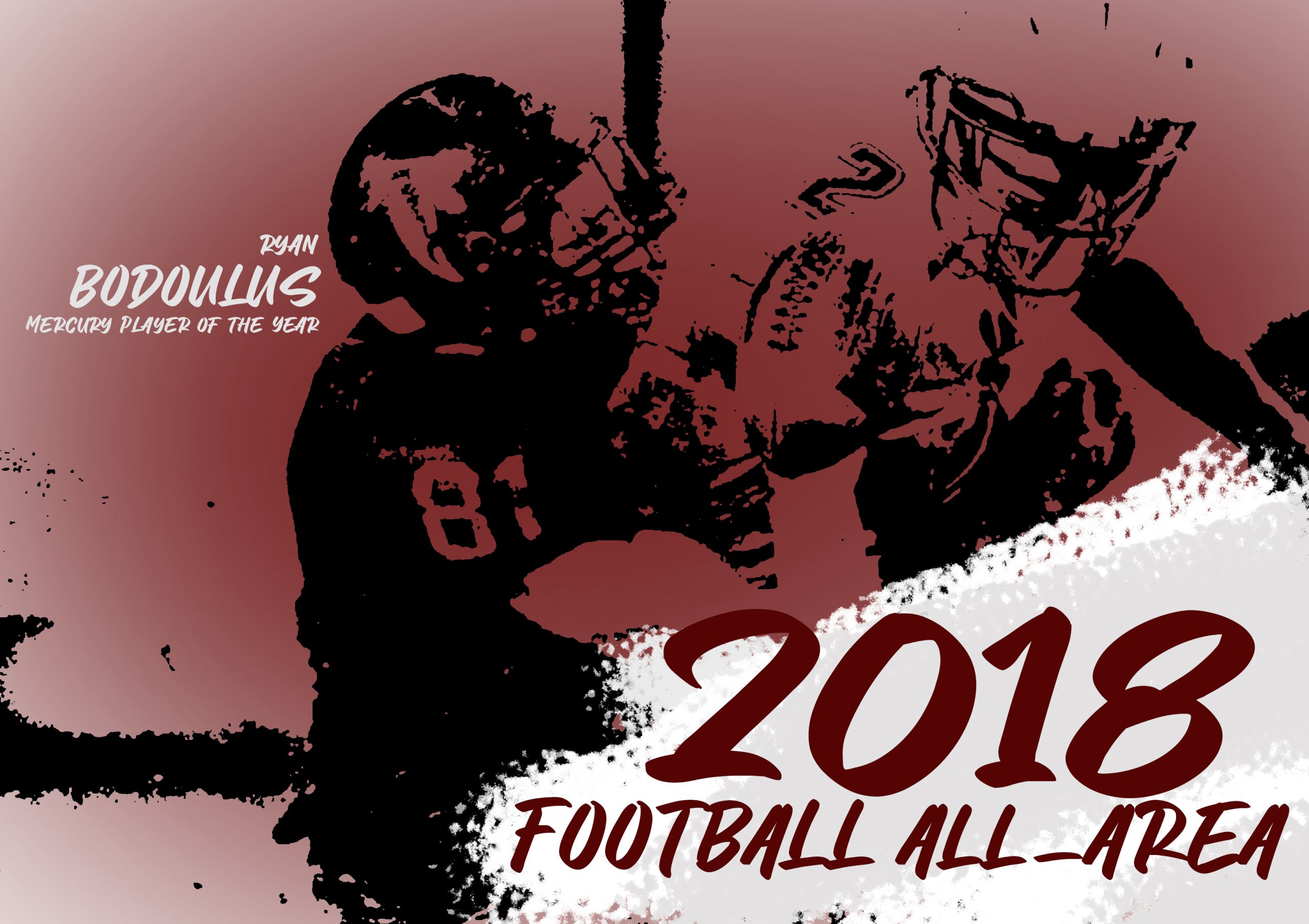 Family history and genetics predetermined that Ryan Bodolus would become a football player.

The hard work, determination, leadership, and championships? Those were all his ideas.

Bodolus, a senior tight end/defensive end for Pottsgrove, paced the Falcons’ stingy defense this year with 75 tackles (32 for loss) and an astounding 18 sacks. But it was his sheer dominance on a play-by-play basis that helped Bodolus stand out as the 2018 Mercury All-Area Football Player of the Year.

“When you look at the tape, (Ryan) shows up on every single play,” said Pottsgrove head coach Bill Hawthorne. “His motor is absolutely relentless, which isn’t as common as some people think in a player of this caliber.”

That motor powered the Falcons to a 12-2 finish this season, which included their third consecutive District 1 Class 4A title and featured the school’s first-ever state playoff victory, a 14-10 slugfest over District 4’s Jersey Shore.

It’s been a lifelong journey to this point for Ryan, whose father Dave coached for years at St. Pius X in Pottstown from 1995–2001 before moving on to Daniel Boone from 2003–2011. Even in those days, young Ryan couldn’t stay away from the football field.

“I’d serve as the waterboy, or I’d hang around the school or the field, see the guys in the weight room,” he recalled. “I think it definitely played a role in building my work ethic.”

Dave would step down at Boone after the 2011 season when brother Tommy Bodolus was named Mercury All-Area Player of the Year as Boone quarterback, right around the time Ryan started his own football journey. The family would move into the Pottsgrove School District just as Ryan was ready to begin his high school days.

“I played 9th grade ball,” remembered Ryan, “then in 10th grade, I started out on JV before the starting defensive end got injured. That gave me my first opportunity to start.”

Bodolus never looked back, notching about a dozen tackles and a couple sacks his sophomore year before exploding onto the scene in 2017, leading the Falcons with 70 tackles (28 for loss) and 17 sacks as a junior.

The numbers were eye-popping, but the breakout season wasn’t too surprising to anyone who knew Ryan Bodolus, who dedicated himself to a training regimen before the 2017 season that made his ascent possible.

“I just want to do a little more each year,” he said. “Each time I go to the weight room, I try to stay a little longer. When I’m working outside, I’m doing more bag drills, more conditioning. I added more and more as time went on.”

Coming into the 2018 season, Bodolus wasn’t sneaking up on anyone. Opposing coaches game-planned extensively around the defensive end.

“The fact of the matter is, whether they’d double him or try another tactic — it didn’t really stop Ryan,” Hawthorne said. “In 21 years of coaching, I’ve never seen anyone as relentless as Ryan on the field, or in the weight room.”

“His strength, lateral quickness, and explosion off the ball made Ryan Bodolus the most dominant player we faced all year,” agreed Rory Graver, head coach of Pope John Paul II. “But most impressive was his motor — he brought the same intensity on the first snap of the game as he did late in the fourth quarter.”

Pottsgrove’s Ryan Bodolus cuts past a Bethlehem Catholic defensive back to score on a touchdown reception during the first half. (Austin Hertzog – Digital First Media)

Bill Hawthorne took over this past season for the retired Rick Pennypacker — his own former coach — as the first new coach at Pottsgrove in nearly three decades. From a player’s standpoint, Bodolus said he didn’t notice much of a difference through the coaching transition. Hawthorne primarily echoed those sentiments, but placed the credit on the shoulders of Bodolus and his classmates.

“I can remember my first day after being named head coach, I headed into the weight room, and there’s Ryan teaching younger players how to lift,” the coach recalled. “I was extremely fortunate to have this particular senior class for my first season as a head coach.

“Ryan’s a leader by example, but this year he grew as a vocal leader, encouraging teammates. It helped all of us, as a coaching staff, tremendously.”

Once the season began, the Falcons didn’t exactly ease their way into things, welcoming District 12 front-runner West Catholic to Pennypacker Field for the opening game. After three quarters, the Falcons trailed 14-0 before converting a quick turnover and driving in the dying minutes to score and move within 14-13 with less than a minute to play.

Many of Bodolus’ exploits come on the defensive side of the ball, but he doubles as a dual-threat tight end who caught 12 passes this year as well. He remembers being out there on offense when Hawthorne — in his first game as head coach—made the call to go for two points and the potential win.

”We were fired up, jumping up and down,” said Bodolus.

Running back Isaiah Taylor would carry for the winning points, starting Pottsgrove’s season on the right note, and rewarding the new coach’s confidence in the offensive unit. Along with Bodolus, Nate Tornetta, Justin Adams, and Darrian Seaman started on both the offensive and defensive lines for Pottsgrove.

“I went for two,” simplified Hawthorne, “because I could run behind Ryan Bodolus and his senior teammates.”

Pottsgrove wouldn’t be challenged again until week 6 brought Pope John Paul II and their high-scoring offense to town. By the Falcons’ lofty standards it was a rough night defensively, as the Golden Panthers put up over 300 yards of total offense in a back-and-forth game. Ultimately, however, the Falcons would prevail on a late seven-play, 60-yard drive powered by their signature running game anchored by the senior-laden offensive line.

“We gave up a lot of points that night,” said Bodolus, “But being able to go right back out there (as offensive linemen) when you’re struggling on the other side, it helps. There were plenty of big plays in that game on both sides.”

The Falcons would travel to Upper Merion and survive a challenge from the Vikings, heading into the Pioneer Athletic Conference championship game at a mark of 9-0 where they’d face Perkiomen Valley for a third consecutive year. The 2016 and 2017 contests had each ended in favor of PV, meaning Bodolus and his classmates had one last chance to conquer the Vikings.

“We needed to step it up,” said Bodolus after the 35-17 championship game loss. “It was disappointing, but it also woke us up before the playoffs.”

“With any other team, I’d have worried about the effect (of the PV loss) going into the playoffs,” said Hawthorne. “But with this senior class, Ryan and his teammates. I knew the loss would strengthen their resolve.”

The District 1 4A semifinals brought Bishop Shanahan to town on a rainy, miserable night that turned the game into a muddy mess—a situation clearly to Bodolus’ liking. The senior defensive end more or less cemented his post-season honors that night with two sacks, a fumble recovery that he returned 39 yards for a score, a blocked extra point to prevent Shanahan from tying the game late in the third quarter, and finally sealing the game with a late sack and forced fumble against Shanahan’s Charlie Maddocks, cementing Pottsgrove’s 14-13 victory.

“Easily, the most memorable game of my career,” said Bodolus. “The weather conditions, the outcome — that’s the most fun I’ve ever had on the football field.”

The next week, the Trojans would top Pottstown for their third consecutive District 1-4A title — a great achievement for Bodolus, his classmates, and a program that’s emerged as one of District 1’s consistent powerhouses over his career.

But the accolades kept coming, as the next week the Falcons became the first team in school history to notch a state playoff victory, topping District 4 champion Jersey Shore 14-10 at Northern Lehigh High School on November 16.

“Anytime you’re the first team in school history to accomplish something, it’s special,” said Bodolus. “Those are my favorite games—competitive, coming right down to the end, just like the Shanahan game.”

Ultimately, Pottsgrove’s record over Bodolus’ final two years was 23-4 — with all four losses coming against either Perkiomen Valley or District 11 powerhouse Bethlehem Catholic in states. Unfortunately, that’s exactly who awaited the Falcons in the state quarterfinals.

For the third straight year, the Golden Hawks of Bethlehem Catholic ended Pottsgrove’s season, this time by a final score of 58-20 that unfortunately blurs the fact that the Falcons competed gamely for three quarters, at one point just a few yards from turning it into a one-score game before injuries began to mount, and the pure size and strength of the Hawks began to emerge.

“I just wished I had one more game,” said Bodolus. “But we were proud of how we played. The last couple years, we sort of got bullied by them and I felt like we quit late. Not this year — we didn’t win, but we didn’t lay down either.”

Asked whether his career had any lowlights that stood in contrast to the highlight of the District playoff victory over Bishop Shanahan, Bodolus didn’t hesitate. “I think I’d trade one of the district championships to have that (PAC championship),” he lamented. “Never having won a crossover game is kind of tough to live with, for me.”

Moving onto the next phase, Bodolus, an honor student carrying a 4.2 grade point average, is interested in a number of possible schools after graduation, both academically and athletically. Ryan plans to attain both a bachelor’s and master’s degree and is torn between environmental engineering and business as potential majors.

Diane Bodolus credits the strong bond between her husband and son with a good deal of Ryan’s success.

“He’s had a personal coach his entire career,” she said, nodding in Dave’s direction. “Dave instilled that work ethic in Ryan and his brothers (Tommy and Eric, former area high school players who went onto play at Bucknell and Kutztown respectively.)”

Ryan also has a 14-year old sister Courtney. Talking to the Bodoluses as a family, it’s apparent that they all share in the credit for one another’s successes.

“We just want to see Ryan happy,” said Dave Bodolus. “And he was. He had a great time playing for Coach Pennypacker, and this year with Bill—everything comes together your senior year. Most kids don’t get to play for District titles, but that’s all icing on the cake. We just want to see him working toward his goals, and the things Ryan’s learned from Coach Hawthorne and Pottsgrove football are going to take him in the right direction.”

It did help the former coach that his son chose football.

“I always say, if he’d chosen music or something, I wouldn’t have been much help at all,” laughed Dave.

“I have to add that Mom gets a lot of credit too,” said Hawthorne. “I’ve learned that as a football coach, you can’t overstate the importance of having supportive parents, who just give and do everything you can ask.”

Not surprisingly, Ryan Bodolus turned the focus away from himself when asked for his most treasured high school football memories.

“My teammates and coaches — Justin Adams, Nate Tornetta, Jimai Springfield, Coach Hawthorne, Coach Bradford, Coach Lindy … there are too many to name, but none of this success is possible without a whole team working towards the same goals.”

“To me, Ryan Bodolus epitomizes what I want Pottsgrove football to be,” said Hawthorne. “He lays it on the line on the field, he’s a great representative of our program in our community, and he’s a top-notch student in our classrooms. I’m very fortunate to be around Ryan Bodolus. In all sincerity, if my own son grows up to be like Ryan, I’ll consider myself a successful father.”