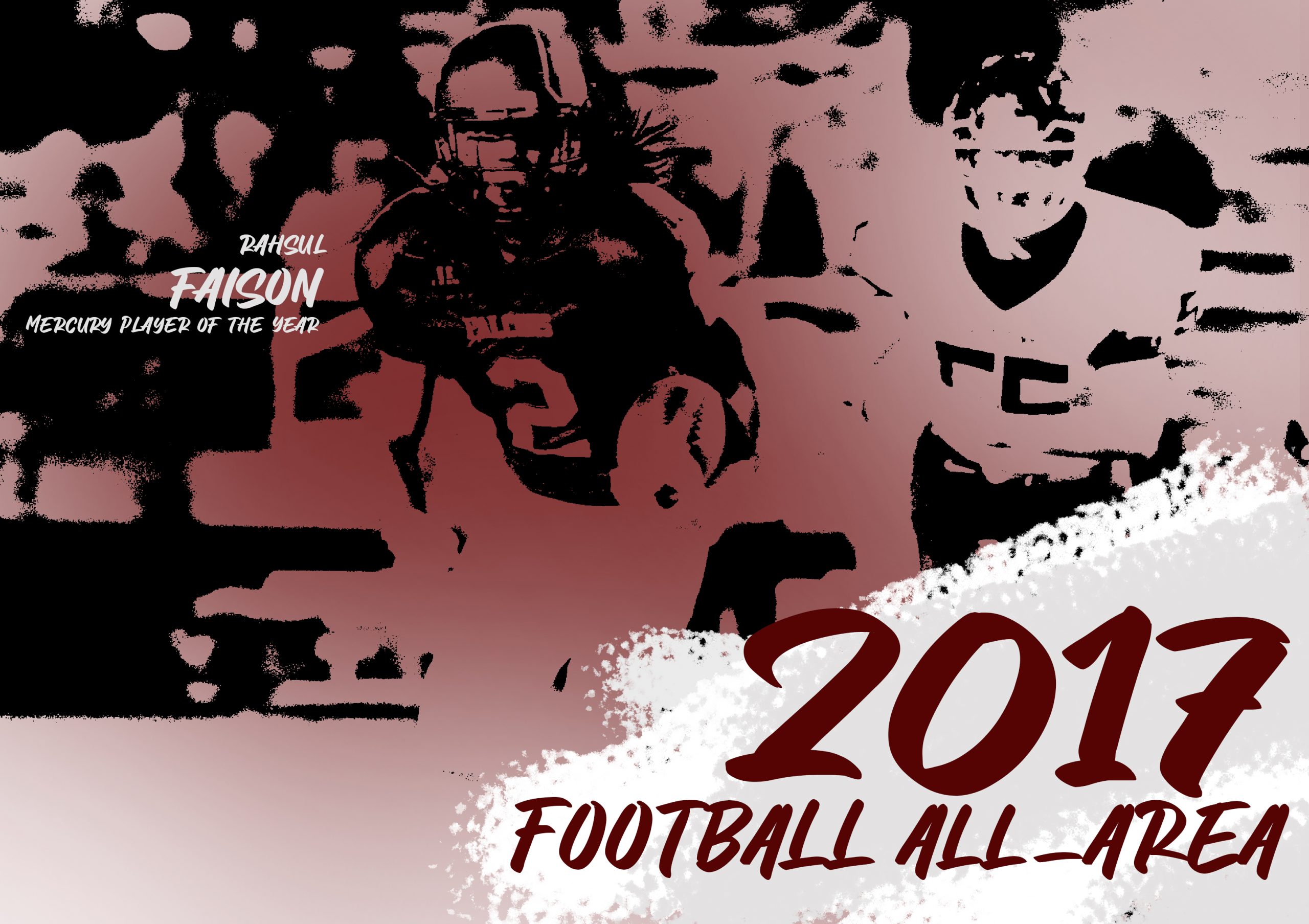 Pottsgrove head coach Rick Pennypacker ran out descriptions. So he leaned on a catchphrase.

“Rahsul is Rahsul,” he’d say time and time again, like it was routine after standout senior running back Rahsul Faison led the Falcons to yet another emphatic win.

Three words that can be translated multiple ways.

Perhaps the best way to read it, though: You know what you’re going to get each week from Rahsul Faison.

It’s easy to get lost in the numbers.

Pottsgrove’s senior running back was simply phenomenal this season. He rushed for a league-record 2,919 yards — putting him atop the Pioneer Athletic Conference’s all-time rushing list for yards in a season and 10th on Pennsylvania’s all-time list — to go along with 42 touchdowns on the year. The Stony Brook commit was the every-down workhorse back this season for the Falcons, leading his team to a second consecutive District 1-4A title and trip to the PIAA-4A playoffs.

Faison displayed his ability to run straight and leave the defenders in the rearview, lower his shoulder and put a would-be tackler into the dirt, and he also had the ability to stick his toe in the ground and completely misdirect a play.

For his standout senior season, Faison has been named The Mercury’s 2017 All-Area Football Player of the Year.


“It’s something I felt like I earned,” said Faison, who racked up a league-best 2,093 rushing yards with 26 touchdowns in his junior season with Pottsgrove. “After last year, I think everyone looked at me like, ‘Wow, he did that? Well let’s see if he can do something like it again.’ So I feel like I really proved myself this season. I think I showed everyone that last year wasn’t a fluke.”

Faison earns the award after the Perkiomen Valley quarterback-receiver duo of Stephen Sturm and Justin Jaworski earned it together last season.

After spending his first two scholastic seasons at Archbishop Carroll, Faison turned back to his roots for his final two seasons. The results were historic.

“Ever since I arrived here, Coach Pennypacker and everyone took me under their wing,” said Faison. “I guess everyone saw the talent I had and they kept on developing it. Coach stuck with me ever since I got here, through all the ups and downs.”

Pottsgrove’s Rahsul Faison (2) is congratulated by Desmond Austin after one of his four first-half touchdowns this past season against Pottstown. (Austin Hertzog – Digital First Media)

Meanwhile, Pennypacker, the longtime Pottsgrove coach who retired after the season, deemed Faison’s arrival in 2016 as “Christmas come early.”

“Rahsul is a special kid. We’ve known that ever since he first arrived here,” said Pennypacker. “I think sometimes, Rahsul has eight eyes — he’s made moves and made runs this year that I’m just mesmerized by. I have to wait to go and watch film to find out how this kid does it.”

A student of the game, Faison finds his inspiration in Pittsburgh Steelers running back Le’Veon Bell, who Faison himself has spent time studying since his idol’s days at Michigan State.

Just like Bell, Faison has displayed the ability to take the hand-off, slowly inch forward to read the defensive developments in front, then quickly hit full-stride for a huge gainer.

“The thing about Le’Veon Bell, he’ll get the ball, pause then he’ll make one cut. He’s a cut-back runner,” said Faison. “That’s the type of runner I am and the type of back I want to become. I see how he uses it to his advantage and how he’ll put his shoulder down when he needs to. He’s physical, shifty, he can do it all. He’s someone I’ve been studying for a long time.”

Faison’s appreciation for Bell went through the roof when Pittsburgh selected him in the second round of the 2013 NFL Draft. Faison’s cousin, Rian ‘Goo’ Wallace, went on to play for the Steelers after a standout career at Pottstown High School.

Some of Faison’s earliest memories of football take him back to his youth sitting in the stands at Heinz Field.

“Ever since I was a kid, Rian has always been there for me,” said Faison. “We both grew up similar so he gets where I come from. He’s always on me, reminds me to keep working hard. He’s always helped me keep my head on right.”

Now as he puts a bow one of the most successful careers in the area’s history, Faison knows he couldn’t accomplish any of it alone.

“I’ve got to give it to my line,” he said. “They made it happen for me all season. My coaches, my teammates, they knew they could count on me no matter what. My mom, me cousins, they’ve always been there rooting for me.”

He’s also drawn some words of wisdom from a former Pottsgrove great, Terrell Chesnut, a 2011 graduate who went on to play with the San Diego Chargers.

“I talk with Terrell a lot,” said Faison. “He helped me all throughout my recruiting process, he’s always on me about my grades.

“There have been so many people with me along the way.”

When teammates, fans and coaches look back at the historic career Faison put together at Pottsgrove, they’ll of course remember the gaudy numbers, the inconceivable runs and the running back’s unique abilities.

What certainly won’t be forgotten is the impact he’s had.

Pottsgrove’s Rahsul Faison tries to break a tackle after a short reception during the opening round of the PIAA-4A playoffs against Bethlehem Catholic. (Austin Hertzog – Digital First Media)

“He’s meant so much to this program in his two years,” said Pennypacker. “He’s no doubt one of the most special kids to ever come through Pottsgrove. He’s one of those kids that I know can go on and do great things.”

By the sound of it, Rahsul will always be Rahsul.