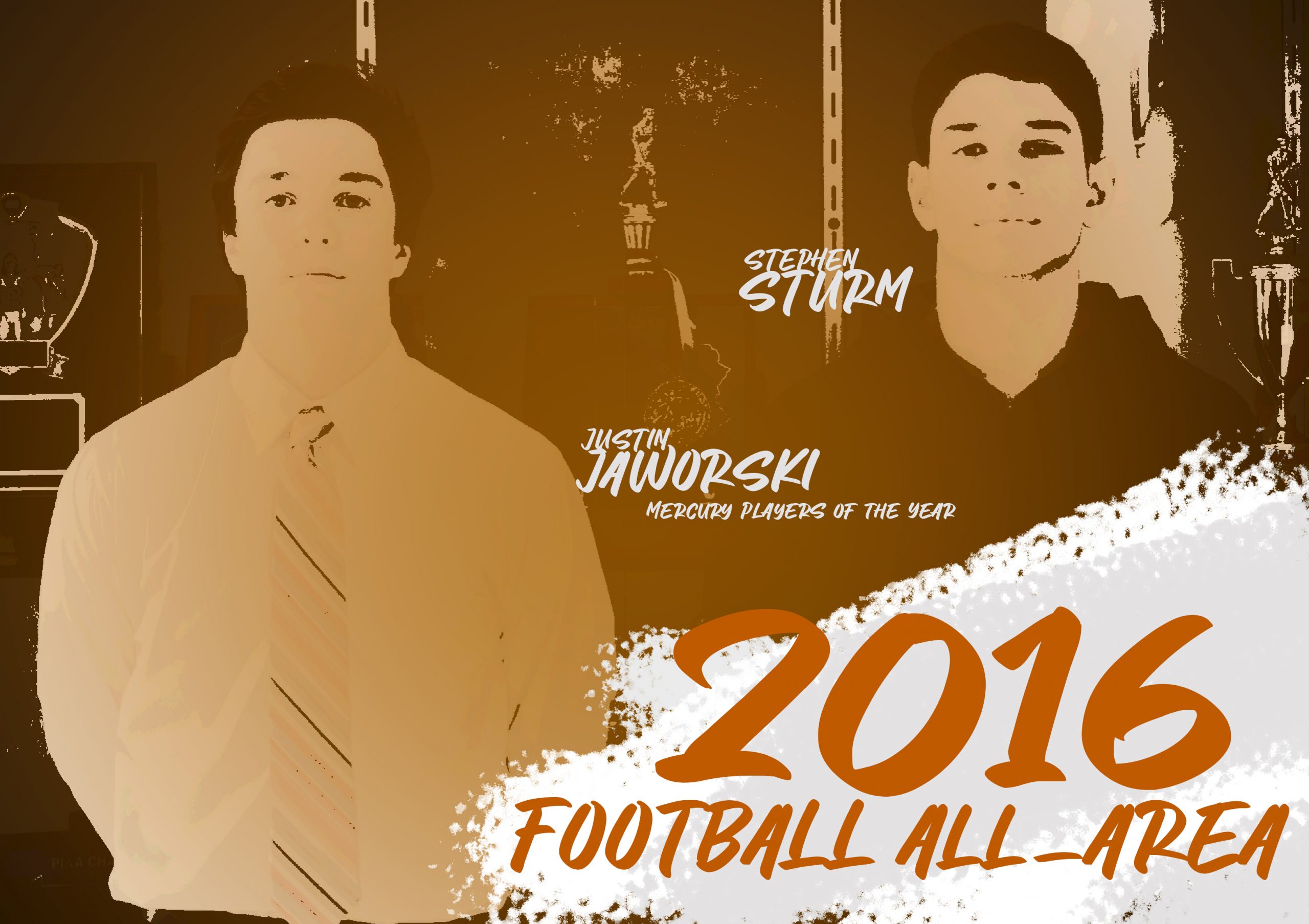 GRATERFORD >> Perkiomen Valley’s Stephen Sturm was taken aback when he was told he was going to be selected as the Mercury All-Area Player of the Year his junior season.

Not because he was selected for the award, but because he believed someone deserved it more than he — wide receiver and teammate Justin Jaworski.

Now, after the duo finished off their illustrious careers with sensational senior seasons, the only thing right was to do what hasn’t been done in football all-area history — select them both.

Jaworski and Sturm, a month removed from helping lead the Vikings to the District 1 Class 6A semifinals and a second Pioneer Athletic Conference championship in three seasons, are the 2016 Mercury All-Area Players of the Year.

“It’s a great honor and it’s awesome to share it with a teammate, especially since he’s a big part of all my success,” Jaworski said.

“I think this is the way I’ve wanted it,” Sturm added. “I wanted it this way last year because I know how much he does for me and my success always depends on him. Last year I thought he was going to be player of the year because of all of the stuff he does. This year, with both of us earning the award, it’s kind of the best of both worlds. It’s nice to get recognition for what I do, but then to see my teammate pick up recognition for all of the work he does every game, it’s also nice to see.”


The duo left the Perkiomen Valley program as the most prolific wide receiver/quarterback duo in Mercury-area history.

Sturm wrapped up the best career of any District 1 quarterback at the largest-school classification, passing for a PAC-record 3,438 yards with 42 touchdowns opposed to just nine interceptions. Sturm, who set the District 1 single-season mark for passing yards in a season for a week before North Penn’s Reece Udinksi bettered it in the district title game, passed Downingtown East’s Pat Develin (2006) for most career passing yards with 8,554 yards. His 94 career passing touchdowns tied Manheim Township’s Pat Bostick (2003-2006) career mark.

Jaworski, meanwhile, broke his own league record for most receiving yards in a season, finishing with 1,396 yards receiving with 14 touchdowns, all while missing two games of the season with a MCL injury. Jaworski, who returned during the Vikings’ victory over Spring-Ford in Week 7, shattered the PAC career mark for receiving yards in Week 3, besting the mark set by Upper Perkiomen’s Ronnie Gillespie in 2011 (2,147 yards). Jaworski capped  his career with 3,270 career yards.

The Vikings, meanwhile, finished the PAC season undefeated, defeating Pottsgrove in the inaugural PAC Championship game before rolling through two district rounds until falling to eventual district runner-up Garnet Valley in the semifinals.

With Sturm and Jaworski, the Vikings finished as the winningest class in school history, going 31-5 the past three seasons.

“Everyone wants to tell themselves that they believe they can do and achieve what they want to do,” Sturm said. “But at the beginning, I don’t think any of us understood the magnitude of what we could do. It’s not only an honor for us, but for our coaches. They put it in place for us.”

“I almost didn’t play my sophomore year because I didn’t think I was going to get time,” Jaworski said. “Coach (Scott) Reed gave me a chance and I played pretty well. Last year I didn’t see our success coming at all. Now, after all this and all of the success we’ve had, I just hope the young guys keep that tradition. It started with Rasaan’s (Stewart) class going to districts and they passed the torch to us.”

Now, both Sturm and Jaworski hope the winning trend continues as both prepare for college athletic careers — Sturm in football, Jaworski most likely in basketball.

“What I hope is that we set an example of what Perkiomen Valley football is about,” Sturm said. “It’s about succeeding on the field from a young age and succeeding off the field and being a good person. I think that’s as big of an award you get can, helping the community and making an impact. Moving forward I think we’ll remember it, but the work doesn’t stop here. We both have plans to play sports in college.”