Mercury All-Area: Versatile Fowler did it on every level for Pottsgrove 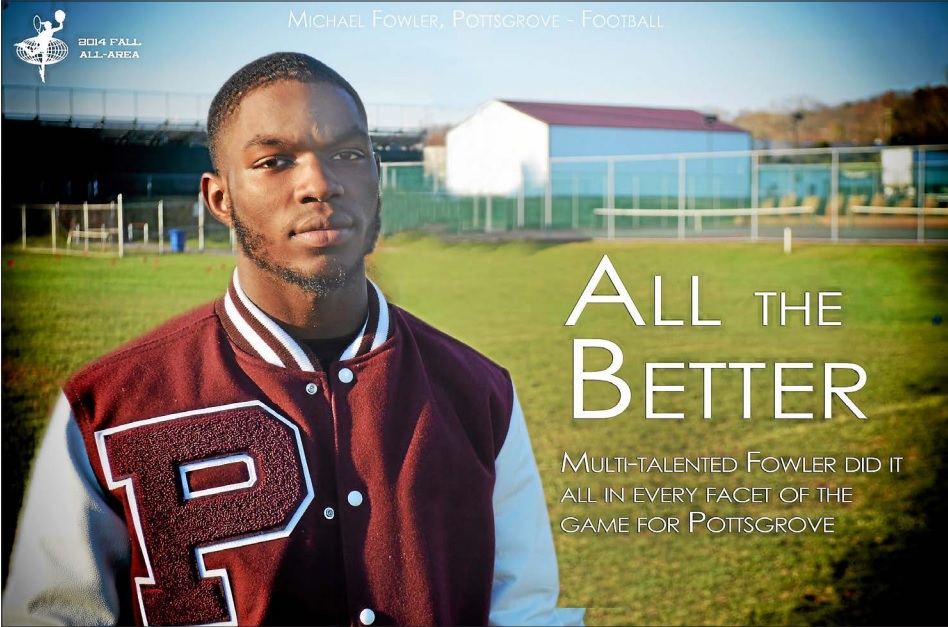 Trying to select the definitive Mike Fowler moment from this past football season is about as difficult as getting open against the standout senior Pottsgrove cornerback.

It could be his dazzling 103-yard interception return touchdown that closed out a Week 7 victory over neighboring rival Pottstown.

It could be his four-score tour de force the week before at Owen J. Roberts, when Fowler hit for a triple crown of sorts by taking a kickoff return and punt return to the house as well as hauling in two TD grabs.

It could be any of his shutdown coverage efforts throughout the Falcons’ 12-game campaign.

But as far as longtime Pottsgrove coach Rick Pennypacker is concerned, Fowler’s most fabulous highlight occurred in Week 5 during a showdown with Spring-Ford.

After a 2-2 start that included a 20-7 loss at Methacton the previous week that snapped Pottsgrove’s record 25-game Pioneer Athletic Conference-record winning streak, the Falcons were staring at the very real possibility of their first two-game losing streak in eight years.

The Rams had shredded the Falcons defense for two long touchdowns over their first three possessions to take a seven-point lead late in the first quarter, and the mood on the home sideline at Pennypacker field was beginning to darken.

That is, until Fowler delivered a play his teammates will remember for a long time.

With the Falcons on their own 30 after the kickoff and trailing 14-7, Fowler caught a pass in the left flat from quarterback Torin Verdone right around the line of scrimmage.

As defender Brandon Barone closed in, Fowler’s options were somewhat limited: Break it outside to the sideline for a short gain, or perhaps cut back against the grain and try to make something out of nothing.

Fowler, instead, chose the proverbial option 3. He put his head down and wound up bulling over Barone, then turned on the jets for a 70-yard touchdown that exemplified his prodigious gridiron talent.

“That play not only changed the complexion of that game, but I thought it was the turning point in our season,” said Pennypacker, whose team would rally for an epic 35-29 victory and stay in the hunt for a league title until Week 9. “Our kids saw that and got really motivated.”

The 6-foot, 174-pound Fowler turned in several more highlight-reel plays over the course of the season to solidify his status as All-Area Player of the Year.

A three-time All-Area first team pick, Fowler led the area with 882 receiving yards and shared the area lead with 11 touchdown receptions while finishing third in the area with 41 receptions. On the other side of the ball, he intercepted three passes and recovered two fumbles despite opposing offenses staying away from him.

Fowler and fellow standout Patrick Finn (a Bucknell-bound lineman) both were part of the Falcons varsity when they were freshman on a team that won the District 1-AAA title and reached the PIAA quarterfinals.

By the time he was a sophomore, Fowler had realized his future was in the secondary.

“It was probably the middle of that year when I began to start feeling comfortable,” Fowler recalled. “Coach would always put me on one of the other team’s best wide receivers. It was a challenge to me, and I just tried to take that challenge head-on.”

He and Finn were virtually the lone returners to a young squad that wound up taking its lumps early.

“Coming into my senior year and being a captain was just an important role,” he said. “You’ve got to be a leader. A lot of underclassmen look up to you, and you have to show them what’s right.”

According to Pennypacker, Fowler handled that task just as well as he did his on-field responsibilities.

“I think he matured a lot this year,” Pennypacker said. “Last year, while I wouldn’t say he was more of a follower, he kind of just conformed to what was going on around him. This year he was elected as a captain, and he took it upon himself to show everybody by example by working hard and by practicing hard.”

Those were traits Fowler displayed every since he cracked the Falcons’ starting lineup three years ago.

“Being a good cornerback takes a lot of hard work and dedication, especially in the offseason and over the summer,” Fowler said. “It was not easy at first, but coming to practices every day and doing seven-on-sevens over the summer made me better. You have to be able to backpedal, you have to stay low and keep your feet.”

Though Pennypacker had been experimenting at several positions with Fowler, he eventually realized that cornerback was his calling.

“At the end of his ninth grade year, he was guarding his brother Johnnie, who was a pretty good wide receiver,” Pennypacker said. “And little brother was taking him on and doing pretty good.

“We knew at that time he was someone who had all the tools. He had the quickness. He had the speed. He had the instinct. He just didn’t have the seasoning, but as he worked in practice every day, he began to get better and better. And at the end of that season, we knew right there we had something special.”

Fowler has displayed that time and time over the past three seasons on a squad that has gone a combined 30-6 and reached the District 1-AAA semis three times during that span.

“He’s had a great career,” Pennypacker said. “He’s got the strongest hands; I don’t think people realize how strong that kid is. He’s slapped together. He’s a threat every time he touches the ball.”

While Fowler made his bones as a star cornerback as a sophomore and junior, he showed his offensive wares full-force this season. After Pottsgrove’s slow start, Pennypacker and Co. decided to make a concerted effort to get him the ball, and it paid huge dividends.

“We realized early in the year that we had to put the ball in his hands 10-to-15 times a game in order for us to be successful,” Pennypacker said. “Luckily, Torin came through and did a good job throwing the ball to him. Once he got the ball in his hands, he’d make a five-yard play into a 40-yard play; a 15-yard catch into a 90-yard catch-and-run. That’s the kind of playmaker he was.”

That was the case on offense, defense and special teams. Fowler’s personal favorite was the Pick 6 against Pottstown. The Trojans had hung tough and were trailing 28-7 and knocking on the door in the closing moments when Gary Wise’s pass intended for Brandon Tinson floated wide of its target in the left corner of the end zone. Fowler swooped in on it, but instead of taking a knee for a touchback decided to bring it out and was off to the races.

“I saw Gary was running and had to throw off his back foot,” Fowler said. “I was covering No. 7 (receiver Aaron Diamond), but once I saw him release the ball, I left him. They thought I was going to take a knee … but I just had to (bring it out).”

Fowler, a standout on Pottsgrove’s basketball team who also plans to run track this spring, is hoping to continue to make those kinds of plays at the next level.

“He’s a Division 1 player,” Pennypacker said. “Whether he projects or not remains to be seen. Colleges are in the future for Mike; the route he takes will depend on his final GPA.”

While his future is still being determined, Fowler’s career at Pottsgrove ranks him among the greats of the highly-successful program.

“This year was a good experience,” Fowler said. “Knowing we had lost that many players from the year before, but seeing how we came together … it was a hell of a year.”

And hell of a season from Fowler.