Mercury All-Area: As Perkiomen Valley’s Rock, Stewart repeats as Player of the Year 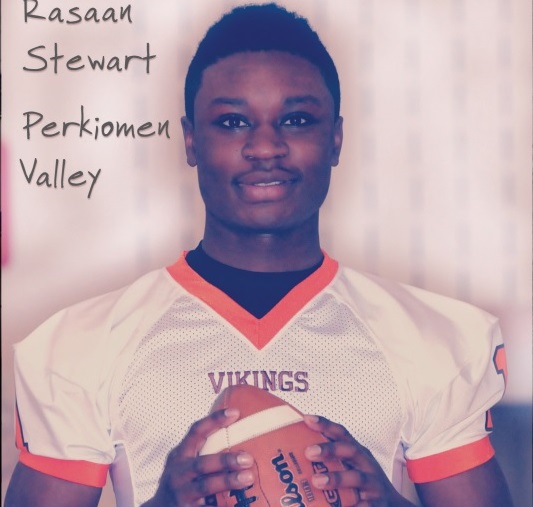 It was on the basketball court, and Stewart made an indelible initial impression on Reed, who was officiating the game.

“He seemed very aggressive, athletic and intense,” Reed said. “I remember thinking he should be playing football with all that intensity.”

Stewart eventually wound up not only playing high school football, but playing it about as well as anyone in Perkiomen Valley (and area) history.

After a breakout junior year in which he was named The Mercury’s All-Area Player of the Year, many wondered what Stewart could do for an encore.

This fall, he answered the question with a scintillating senior season that helped the Vikings carve out an historic campaign.

The 6-foot-1, 182-pound Stewart racked up an area-best 2,068 passing yards and 26 touchdowns while also rushing for a team-high 1,204 yards and 17 touchdowns for the Vikings (10-3), who matched a school-record for wins in a season, won their first District 1-AAAA playoff game in school history and advanced to the District 1 semis.

Those accomplishments made Stewart — the son of Chris and Cynthia Stewart of Collegeville — an easy choice to repeat as All-Area Player of the Year.

Back in ninth grade, Stewart actually started out as a running back.

“I was just looking for a sport to play,” he recalled. “Something to kill some time and have some fun.”

Reed and PV assistant Rob Heist envisioned so much more, and so began the process of transitioning Stewart to QB.

“Rob and I felt he was the best athlete in our program, and we wanted the chance to have a three-year quarterback,” Reed said. “It was slow going at first, but he worked so hard to be a good QB. I think he took ownership over the position. He wanted to prove to his coaches, teammates and opponents that he could be a good QB.”

And so Stewart began the journey from diamond in the rough to dazzling gem — one that certainly didn’t happen overnight.

“I’ve definitely improved greatly from where I started,” Stewart said. “My sophomore year, I could barely throw a spiral 20 yards, but I just kept working.”

After being primarily a running QB two years ago, Stewart came into his own as a junior, when he ran for 1,210 yards and 21 touchdowns and completed 61 percent of his passes for 1,636 yards and 12 touchdowns.

“What really motivated me was the fact that they gave me an opportunity to play at that (starting QB) level at a young age,” Stewart said. “I realized I had to take advantage of it, and ever since that day I’ve been trying to give it all I have to the best of my ability.”

Stewart’s physical traits are well-documented. He has the speed to take a quarterback draw 81 yards to the house (as he did in the first play from scrimmage of the Vikings’ district semifinal against North Penn) and the arm strength and precision to put intermediate and deep throws right on the money to big-play receiving threats Clay Domine and Dakota Clanagan.

But to run PV’s no-huddle offense, it takes more than a gifted athlete.

“Rock (Stewart) is very cerebral, especially when it comes to football,” Reed said. “He loves watching film, whether it’s opponents, his teammates or himself. He knew our offense inside and out. He knew exactly what his receivers were doing — when they were going to make their breaks, and where the ball needed to be thrown.

“He and his teammates would do a lot of extra work when no one was around. We would have 7-on-7 scrimmages and they would go throw some more when it was over or when we got home from traveling. He loves the game of football and I think it rubbed off on everyone around him.”

Stewart also loves to compete with a zealot-like fervor. A mild-mannered, soft-spoken sort off the field, he seemingly transforms into a wild animal between the lines.

“I have a love for the game, a love for getting better and competing, and a hatred of losing,” Stewart said. “On Friday nights, something changes inside of me and my competitive side comes out. That happens in basketball, ping-pong or anything else I compete in.”

Three games into this season, Stewart’s hopes of helping the Vikings bring home a Pioneer Athletic Conference championship were dealt a big blow after a 14-7 loss to Spring-Ford. Then in Week 9, Stewart and PV had a shot to earn a share of the league title but came up short again in a 23-12 loss to eventual league champion Pottsgrove.

That could have been where the story ended, but Stewart wasn’t about to let that happen.

“After I knew we weren’t going to win the PAC-10, I didn’t want my senior year to end on that note,” Stewart said. “Great players wind up winning big games and helping make history, and that was something I really wanted to do: to help my team get to that stage and bring something like that to my school before I leave.”

Thanks to a memorable three-week trek through the District 1 Tournament, Stewart did his part to accomplish that mission.

First, he threw for 225 yards and three touchdowns as No. 15 seed Perkiomen Valley took down unbeaten No. 2 seed Bayard Rustin 26-6 in the first round.

Then, Stewart delivered a career-high 268-yard, four-TD passing outburst in a shocking 60-20 victory over traditional power C.B. West, while also rushing for 96 yards and two TDs and tacking on a kickoff-return score for good measure in what will be considered his career-defining performance.

A week later, in the semis, he scored three first-half touchdowns to put the fear of God into powerful North Penn as the Vikings took a nine-point second quarter lead, before the Knights countered with 30 unanswered points on the way to a 40-19 win that ended the PV season.

By that time, however, Stewart’s legacy had been firmly secured.

Though he finished his career with 4,438 passing yards, 2,954 rushing yards and 96 total touchdowns, Stewart’s gaudy numbers only tell part of his impact, according to Reed.

“The fuel to his fire this season was all team- and program-driven,” Reed said. “He wanted to win the PAC-10, go to districts and win games in the postseason. He never missed a workout, never missed an offseason team day and never missed a conditioning or acclimation day. He deserves everything he gets. He has talent, but that wasn’t enough for him. He nurtured his talent. So many guys have talent and no work ethic or work ethic with little talent. He is the rare occurrence where he had plenty of both.

“I think he can look back on his high school career with no regrets. He did everything he could to make himself and our program better. He is leaving with our football program in a better state than when he got here. Myself, the rest of the coaching staff and all of those who support PV football will forever be grateful for the time we had with Rasaan Stewart.”

Stewart’s football career will continue next year at the college level, and earlier this week he said he was getting close to making a decision — with schools such as Penn State, Pittsburgh, and Villanova topping his list.

“It’s definitely going to be a new experience,” said Stewart, who is projected by most schools as a defensive back. “I’m going to miss my teammates a lot, especially this senior class, but I’m looking forward to being able to make some new memories and showing everyone who supported me that you can do anything if you put your mind to it.”

Stewart’s fabulous final scholastic season was a perfect example of that.