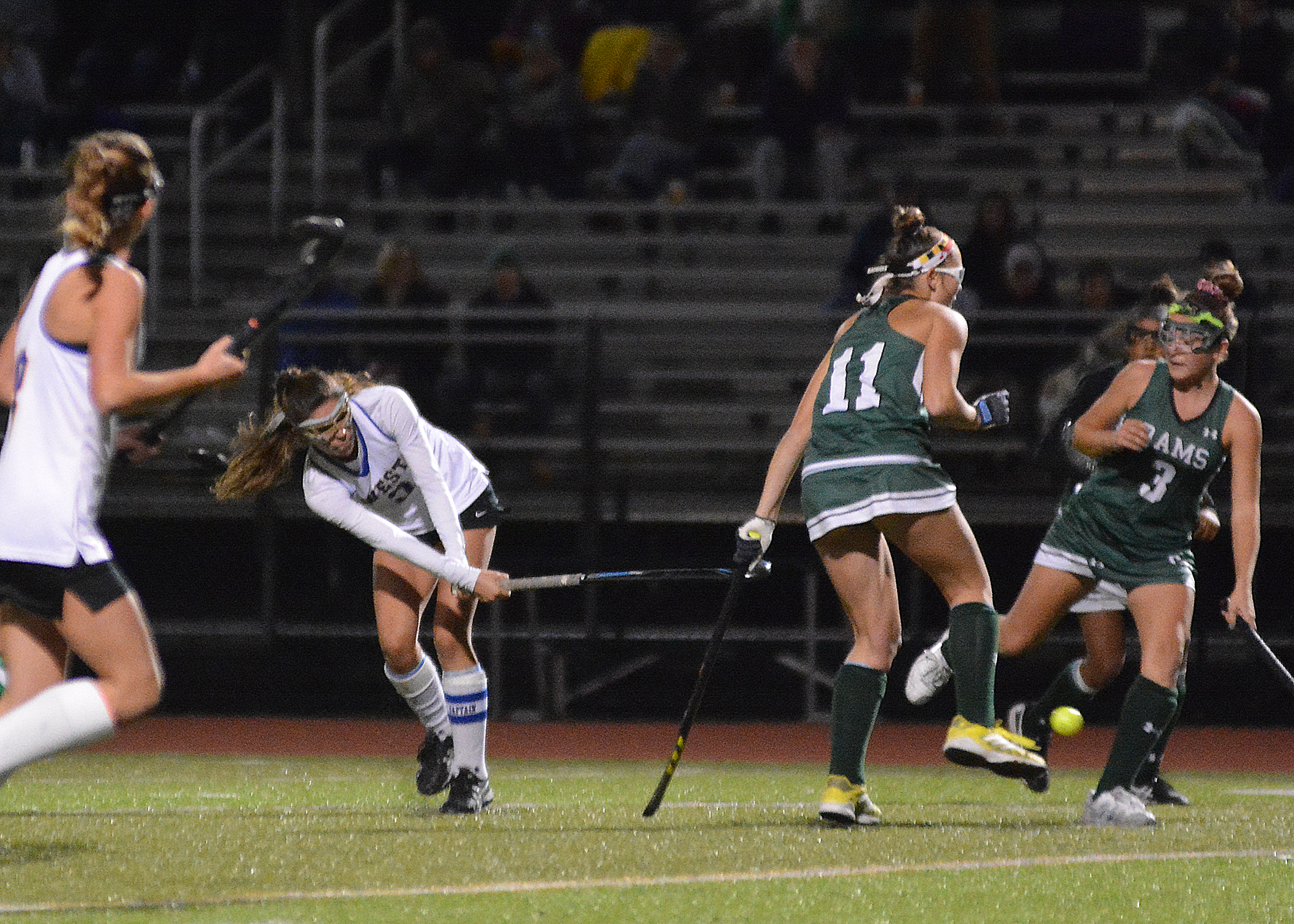 EAGLEVILLE—It wasn’t a situation the Whippets hadn’t seen before, falling behind 2-0 in the early going. Just this past Saturday, Downingtown West battled back from a 2-0 deficit to win their second District 1, Class 3A field hockey crown in three years in overtime.

And it almost happened again. Central Dauphin, the fourth seed out of District 3, jumped on top quickly on the Whippets, taking a 2-0 lead in the first ten minutes in the opening round of the PIAA tournament Tuesday night at Methacton High School. Once again the Whippets battled back to force overtime, but this time around, there would be no celebration, as the Rams scored 1:13 into the extra period to notch at 3-2 victory to advance to Saturday’s quarterfinal round.

“This team never got down on themselves, and just kept fighting,” said West coach Steph Bullock. “The last two games, we wanted to come in and set the pace, but just didn’t, and started out slow. Once we started finding a rhythm, we made it a battle until the end.”

Led by one of the very best high school players in the country in Hope Rose, Central Dauphin got on the board first with a beauty of a goal from Rose, then again two minutes later when Rose sent a bullet towards the cage, and Maya Williams tapped it in for the score.

West finally got on the board with 11:38 to play in the half. Ciana Riccardo brought the ball up near the circle, then placed a perfect pass onto the stick of Ciara Margetich, who slipped it past goalie Liliana Price for the score, and the game went to the break with the Rams holding a 2-1 advantage.

Coming out of the break, West looked like a whole new team, aggressively going after every ball, and controlling possessions throughout the half. All of a sudden, the scoring opportunities were coming all over the place. During one eight minute stretch, West forced nine penalty corners, but was unable to convert.

Undaunted, the Whippets kept pushing, and tied the game at 2-2 with 8:36 remaining on a goal from Tatum Johnson, with Riccardo picking up her second assist of the night.

West had a chance to win the game in regulation, forcing a pair of corners after time expired, but the Rams’ corner defense held. Rose ended it moments later in overtime with her second score of the game.

With the loss, the Whippets’ season comes to a close, but it wasn’t a season lacking in success stories, with a league championship, as well as a District championship. Not to mention invaluable experience for the younger players on the team, and there are quite a few underclassmen who made their mark on the season.

“The younger players have seen what it takes to win at this level,” said Bullock. “They’ve had good mentors with the older girls, and are sure to come back ready to take it even farther.”

For the five seniors—Johnson, Riccardo, Lauren Byers, Isabella Thir and Kari Schmidt—it is the end of a high school career. But the group can be proud to have done their part in helping build what has become one of the top field hockey programs around, winning the Ches-Mont all four years they were here, plus a pair of District titles, and a state finals appearance.

“It’s hard to put into words how much these last four years mean to me,” said Riccardo. “Being able to play with two of my sisters, and with my dad coaching is incredible. We helped build a program.

“ It’s going to be great to know that we were part of a team that can say we were the first,” Riccardo continued. “The first district champs, the first to do it twice, the first in state finals. But now I can just wish West the best for the future, and I’m looking forward to what comes next—playing in college at North Carolina, and playing with my sister (Romea) again.”