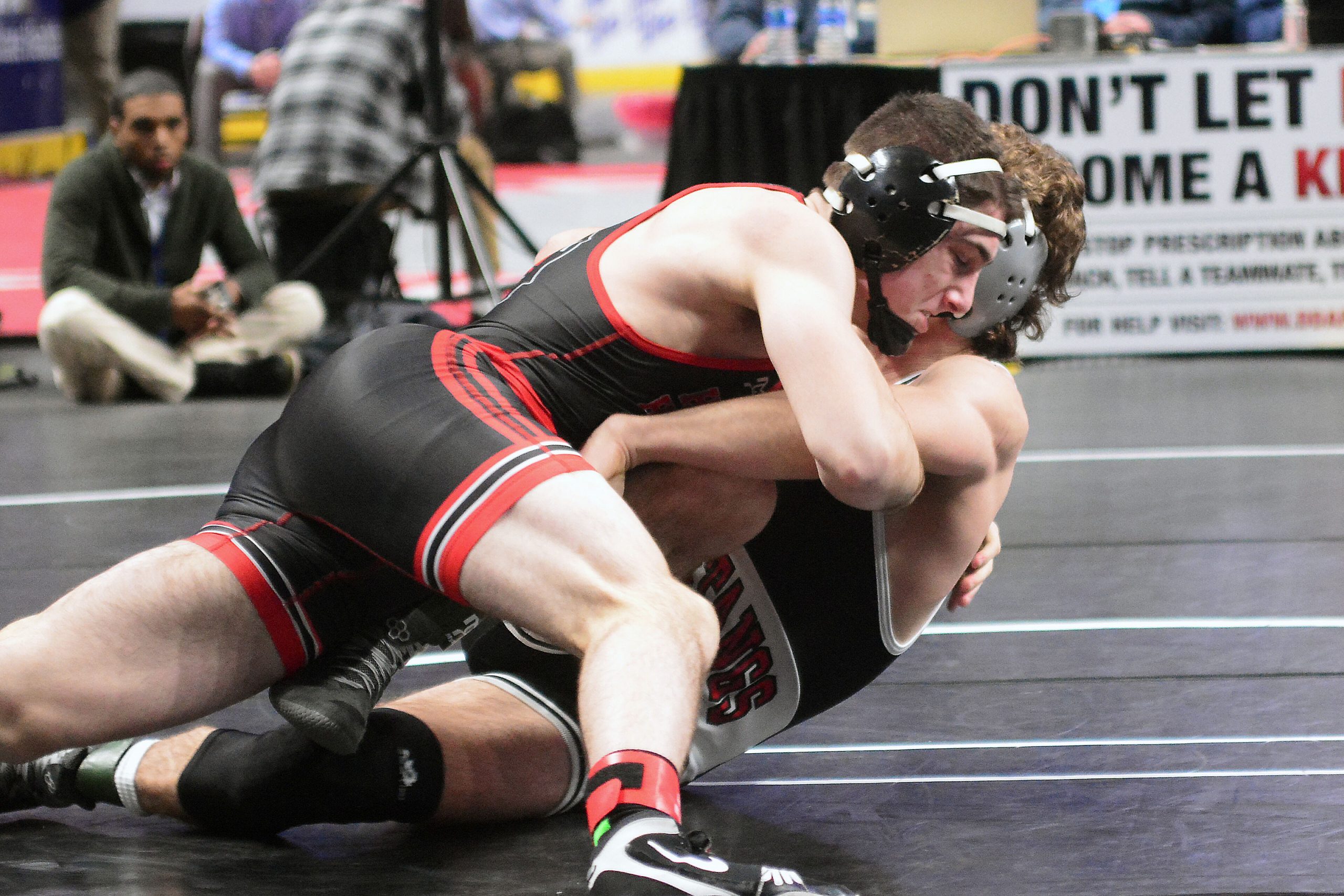 HERSHEY—It was a rough day for area wrestlers at the PIAA State Championships, as just two survived to make into the medal rounds, Faith Christian’s Eric Alderfer at 120-pounds un Class AA, and Hatboro-Horsham’s A.J. Tamburrino at 152-pounds in Class AAA. Both have suffered losses, and are battling back for a shot at third.

Alderfer was the lone area wrestler to reach the quarterfinals in either class, but dropped an 8-2 decision to Eisenhower’s Logan Jaquay to drop him into the consolation rounds. When Williams Valley’s Michael Myers was forced forfeit due to an injury sustained earlier, Alderfer clinched a spot on the podium.

In Friday night’s consolation quarterfinals, Alderfer squared off against Bishop McDevitt’s Nate Smith. Scoreless to start the second, Alderfer chose down, and Smith took advantage, working a tilt for three near fall points. Smith took his turn underneath in the third, and while Alderfer cut him loose hoping to work a couple takedowns to get back in the match, but Smith held on for the 4-0 win.

“Eric still has a chance to end his tournament with a win,” said Lions coach Ben Clymer. “He is going to come back here next year with high expectations, so now is the time to understand that every match we enter, whether it is regionals, or a dual meet, we are there to make it a fight and come away with a win.”

In Class AAA, Tamburrino posted back-to-back wins to earn a second straight appearance on the podium after

Hatboro-Horsham’s AJ Tamburrino ties up with Nazareth’s Nathan Stefanik. Tamburrino won the bout 5-2 to clinch a spot on the medal stand. (BILL RUDICK for MediaNews Group)

finishing third last year. First came Ethan Baney of Southwestern, who proved barely a challenge for Tamburrino. With three takedowns and a couple sets of nearfall, Tamburrino cruised to a 13-2 victory.

Up next, survived his blood round match-up with Nathan Stefanik of Nazareth. Tied 1-1 midway though the third, Stefanik tried to go big with a throw, but a simple sag counter and Tamburrino had the takedown. Though Stefanik broke loose for one with about 20-seconds to go, Tamburrino was able to fend off another Hail Mary throw attempt to win 5-2.

Coming back from an early loss to get back on the medal stand is no easy feat.

“Guys like AJ all come here not just wanting to be a state champ, but expecting it,” said Mongiello. “So after getting upset in the first round, it takes a lot of character to come back and still push hard to do the best you can do now, which is third.”

Several other locals won matches Friday, but came up a win short of the medal stand.

William Tennent’s TJ England (132) opened his day woith a 6-5 decision over Matt Sarbo of Altoona, but fell in a rematch of last week’s regionals, 5-2 to Neshaminy’s Zach Martin.

Metchacton’s Kibwe McNair was dominant in a 10-0 blanking of State College’s Clayton Leidy, but in the blood round, Nazareth’s DeSawn Farber proved a bit too much, handing the Warrior a 5-0 defeat.

Logan Green of Pennridge topped Selinsgrove’s Ryan Aument 5-0 in his first match of the day, but fell 4-0 to Central Dauphin’s Jackson Talbot and was eliminted.

At 220, Wissahickon’s Dan Keller notched a 6-5 overtime win over Paolo Disanto of Plymouth-Whitemarsh, but then lost his second match, 7-2, to Central Bucks East’s Dan Eckley.