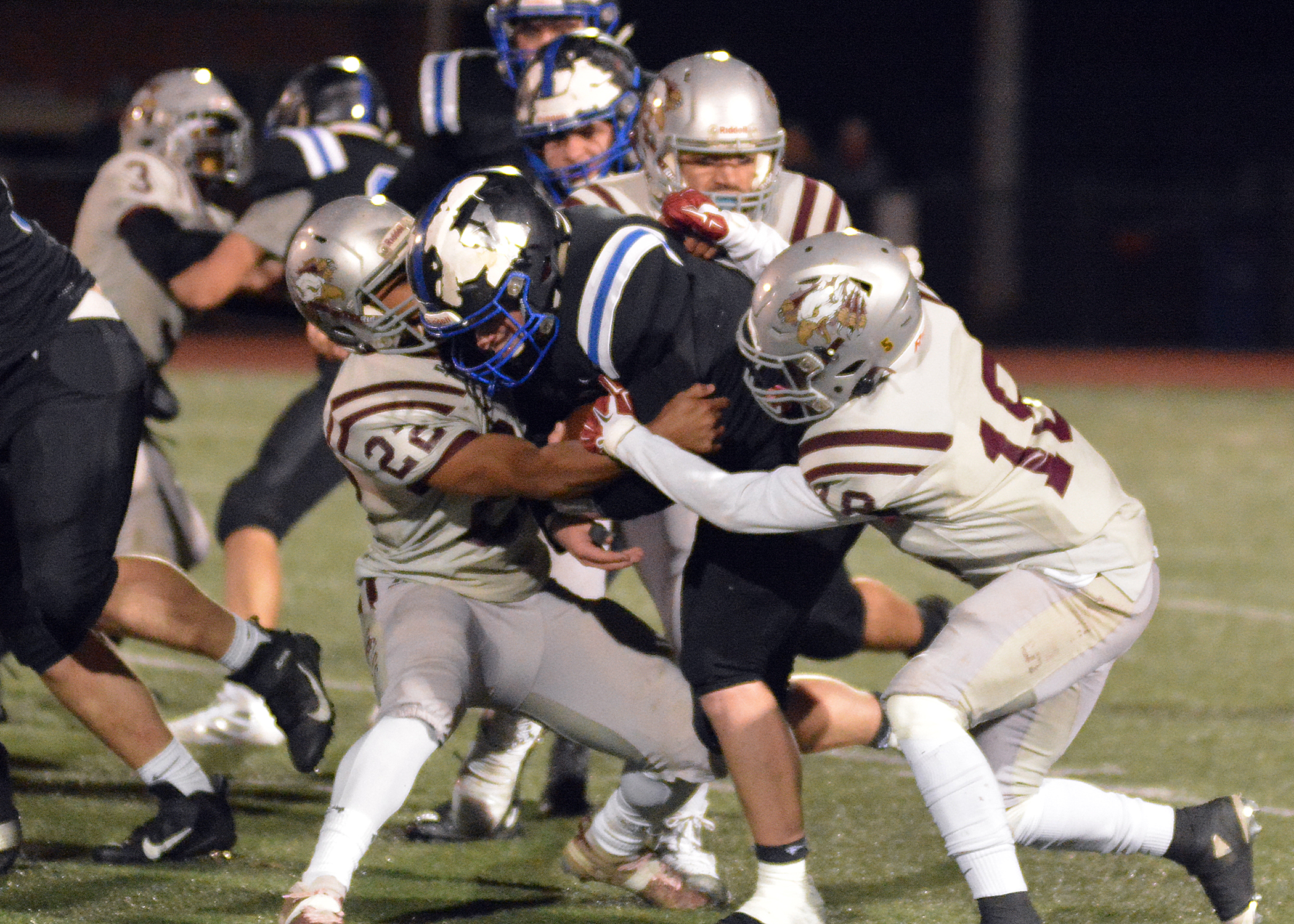 KENNETT SQUARE—A year ago, the Kennett football team turned some heads by running off a late season win streak to qualify for the District 1, Class 5A playoffs for the first time in program history. With a dominant 31-0 shutout win Friday night over No. 13 Chichester (3-7), the fourth-seeded Blue Demons took the next step, and notched their first playoff win ever.

With the win, Kennett (10-1) moves on to host No. 5 Strath Haven, a 21-6 winner over Upper Merion Friday, in next week’s quarterfinal round.

“It’s a bittersweet win, to be honest,” said Kennett coach Lance Frazier. “I am really proud of these guys and getting their first playoff win, but I know we have to play a lot better than we did tonight if we want to keep moving on. We had far too many penalties, and we were lucky the defense bailed us out a few times with big plays.”

The Kennett defense has been on fire of late. Since falling at West Chester East, the Blue Demons have won four straight, outscoring opponents 138-10 in that span, with three straight shutouts. Kennett held the Eagles to a mere 32 yards rushing, and 96 total yards.

No one has been bigger on the defensive side of the ball than Vince Cresci. Cresci forced a couple of fumbles, had two sacks, and just basically could be found wherever the ball was.

“Vince has been playing like a man possessed lately,” said Frazier. “He was stripping the ball, making sacks, and it just seemed like every time Chi started getting something going, he was right there making a play. It’s great for him. He was out all last year, and moved from defensive back to the defensive line for us, playing like a staple in our defense. Incredible football IQ and very coachable.”

For Cresci, all that matters is the “W.”

“When I was a freshman, the idea of going 9-1, 10-1 seemed like a crazy fantasy,” said Cresci. “Now that it’s real, it’s an amazing experience. But this is all of us, on both sides of the ball. Every win is the whole team.”

Kennett jumped out quickly, surprising no one by putting the ball in the hands of their workhorse, Garrett Cox. Cox was involved in every play on the 62-yard scoring drive, with his first two carries going for 16 and 15 yards respectively. Cox also caught a pass to convert a third down, and scored the touchdown from 4 yards out.

Cox finished the night with 109 yards on 17 carries, and scored all four Kennett touchdowns. Ryan Barker added a 21 yard FG to round out the scoring.

“We’ve been talking about getting this first playoff win for a while,” said Cox. “The defense was amazing, and offensively, we set the tone with that first drive. The o-line was great. We won’t take anything for granted, but I don’t think anyone here is going to let this train stop rolling.”

Kennett didn’t go to the air often, but quarterback Sam Forte was efficient when they did.  Forte, who also had 81 yards on 13 carries running the ball, threw for 136 yards on 7 of 13 passing, including a 73-yard pass to Tommy Patrissi on third and long to set up the Demons’ second touchdown.
Though Chichester’s playoff run is over, they still have a rivalry game against Interboro to come.

“With all the adversity this team has faced, it was great for these kids to get a playoff game,” said Chichester coach Bob Brice. “Kennett is a very good football team, and really well coached. That defense is very tough, but I thought ours did a pretty nice job, too. We know what Cox and Forte can do. But a few too many mistakes game them too many good opportunities.”