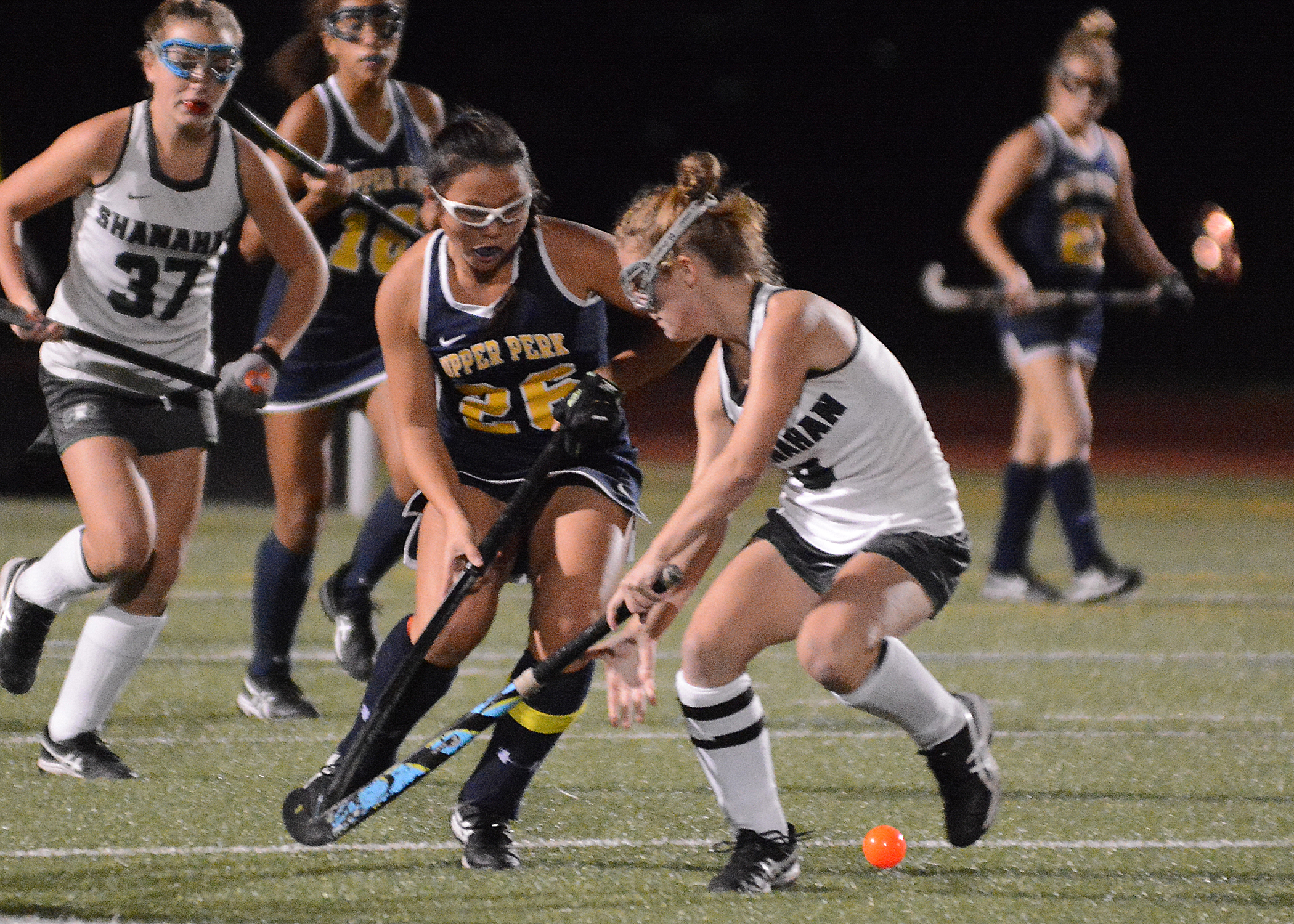 DOWNINGTOWN—Tuesday night’s District 1, Class 2A semi-final between No. 2 Bishop Shanahan and No. 3 Upper Perkiomen was all that a playoff field hockey game should be—two evenly matched teams matching each other goal for goal, corner for corner, save for save, through regulation and deep into overtime.

But eventually, there has to be a winner, and when AiYi Young found the back of the cage with just under seven minutes to play in overtime, Upper Perk (19-4) clinched a 3-2 victory and punched its ticket to Saturday’s District 1 title game, where they will face No. 5 Merion Mercy, a 4-2 winner over Villa Maria in the other semi-final.

“This was a total team effort,” said Young. “We’ve been talking all year about getting to district finals, and once the clock started running down in overtime, we all just started saying to one another that it was time to get it done and put the game away. It just feels great.”

Right out of the gate, the Indians looked tough, and they way they dominated the first eight minutes or so, it seemed a runaway might well be a possibility. After playing most of the first seven minutes on their own offensive half, Upper Perk forced its third penalty corner of the game, when Sydney Crossin tipped in a shot from Young for a 1-0 Indians lead.

“It’s always our goal to try to score in the first five minutes and put the pressure on the other team,” said long-time Indians’ coach Jamie Warren. “It took a little longer, but it was on a really well-executed corner. After that, we lost our way a little bit and they came back on us.”

Right around the midway point, Shanahan forced their first corner of the game, and it seemed to light a spark underneath them, as they forced two more in the next minute and a half. Upper Perk goalie Lynnsi Joyce made a beautiful save to ward off the third one of the trio, but within a minute, Shanahan’s Bella D’Allesandro put a ball on the stick of Angelina Luongo behind Joyce, and Luongo slammed the equalizer home.

“We did get off to a slow start and they had us on our heels for a little bit,” said Shanahan coach Nancy Roselli. “But once we found our footing, it was an even game the rest of the way deep into overtime. I think all four of the top teams are pretty evenly matched and it will be fun to see how we all do in states.”

The second half was very much like the first—Upper Perk scored early in the period, converting a corner on a Bella Carpenter goal, with an assist from Young, then Shanahan matched them two minutes later when Luongo picked up her second goal of the game, with an assist from Lauren Bradley, to set up the 7-on-7 over time and Young’s heroics.

Upper Perk has been on a roll since the end of the regular season, knocking off both Perkiomen Valley and Owen J. Roberts, both semi-finalists in class 3A, to win the PAC-10 playoff, while outscoring the opposition 8-3 in three district games to reach the finals.

“I like that we have a league playoff before districts,” said Warren. “It puts us in some high intensity games against tough opponents. Our league prepares us for this time of year. I always want to see us be a good passing team, and the last four games, we have done that.”

Shanahan isn’t done yet, having already cemented a spot in the PIAA tourney, and will look to earn the No. 3 seed from the district when they face No. 9 Villa Maria Friday at Shanahan.

“We’re going to take a day off tomorrow, have our banquet and celebrate our success so far,” said Roselli. “Hopefully that will be the break we need, and then we’ll come back and get ready for Villa. I like the way we are playing—Emma Leppert has been amazing in the cage, and that has our defense charged up, especially on corners. We have some things to work on and smooth pout before Friday, but I think we have quite a few games left in us.”