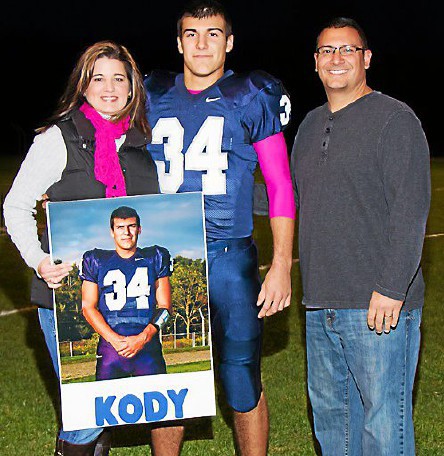 Like most of the seniors at Kutztown Area High School, Cougar football standout Kody Reichart is busy with all the normal activities associated with graduation and his senior year. But for Cougar football lineman Reichart, this spring has been filled with much more. From going to states in wrestling, being selected as a starter in the Berks County All Star Classic football game on May 31, and starting the Cougar baseball season. Now, the decision about his future has been made. This past week, Reichart was recruited to play football for Delaware Valley College in Bucks County. Kody will be majoring in criminal justice and playing football as an Aggie.

Kody played four seasons of varsity football, playing both defense as a lineman, and offense as a fullback and quarterback. His play on the field attracted a lot of college recruiters, but in the end Kody picked the school that best fit all his needs for his future and to play the game that he loves. His parents, Beth and Terry Reichart, were ecstatic learning about Delaware Valley College’s football coaching staff interest in Kody.

“Once recruiters started contacting Kody about playing football for them, he really became interested in pursuing a college degree in criminal justice rather than entering the military,’ said Terry. “When we visited campuses, it was quite clear that Delaware Valley University was what seemed to ‘ it’ him. As parents, we were impressed by the amount of interest the coaching staff took in the boys’ academics, as well as helping them improve their skills and abilities on the field. We’re looking forward to watching him play as an Aggie!’

Typical of Kody, he saw this as another step.

“I’m happy to be able to extend my football career at Delaware Valley Universit,’ said Kody. “It’s an awesome opportunity that I never thought I would get. I’m excited to be an Aggie.’

Kody’s senior year was one that showed off his multiple abilities. In 11 games, Kody played on average 55 minutes per game, both on offense and defense. He led the Cougar defense with 18 tackles and ran for two touchdowns and passed for another while on offense. But his play on the field was just part of what made him a stand out. His leadership in the locker room and off field is what his teammates remember the most. Also, his love of the game and his ability to make his teammates laugh even at the worst of times.

Former teammate and friend Phineas Hilliard, 2014 grad, talked about Kody with fondness that only comes about from playing together for 3 years.

“It was always entertaining with him. He always kept everyone in high spirits and I love his enthusiasm on and off the field.’

Cougar head football coach Matt Hoffert, who is a graduate of Delaware Valley College and coached Kody for his senior year said about his player.

“I’m excited that Kody has a chance to continue his football career at Delaware Valley. Del Val has a great program and they are getting a hard working player. His good work ethic will help him succeed at the next level.’

“When we saw Kody on game tapes, we could see the potential in him. He plays hard and has a great work ethic.’

In the last 11 years, the Aggies have elevated themselves into one of the top Division III programs in the country as they have a 99-28 record during that span. They have captured six Middle Atlantic Conference (MAC) championships and three Eastern College Athletic Conference (ECAC) championships, and have made five trips to the NCAA Division III playoffs, including a pair of quarterfinal appearances. Recently, Delaware Valley College standout Rasheed Bailey signed with the Philadelphia Eagles.

You can see Kody play in his last football game at the high school level on May 31 during the Berks County All-Star Classic Game at Exeter High School at 4 pm. Hoffert will be the Blue Team head coach and you can be sure that Kody will be giving his all for his final game.