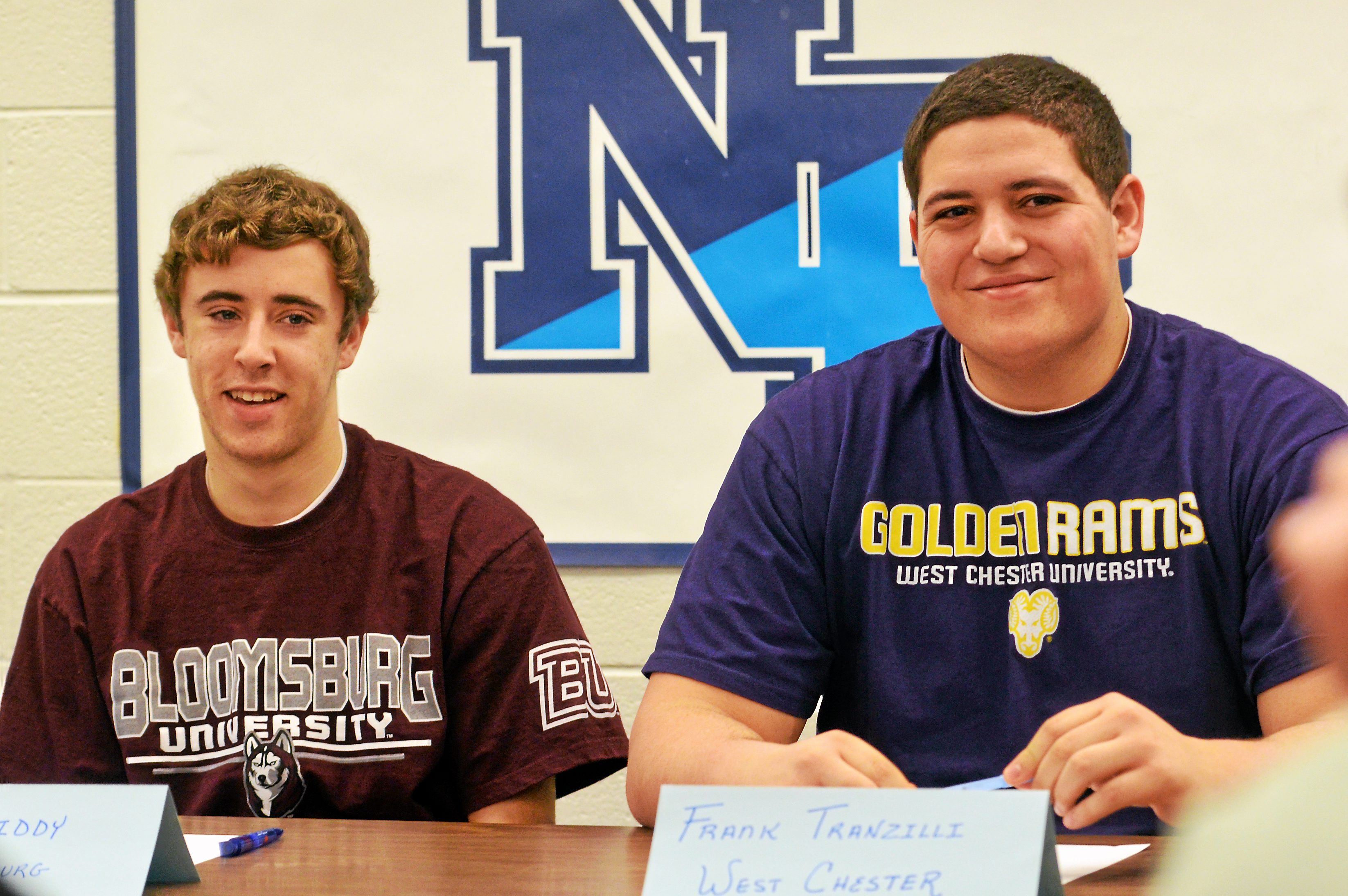 TOWAMENCIN — It is always a good sign for a high school football program when you have players skilled enough to take the next step and play for a college program. Wednesday morning two players from the North Penn football team took that next step, announcing their intentions to play the sport they love at the collegiate level.

Mike Liddy announced his decision to play at Bloomsburg, most likely at the safety position, and will try and earn his degree in either accounting or finance.

His teammate, Frank Tranzilli, decided to continue his education and football career at West Chester University playing on the interior offensive line and focusing on either economics or business management.

While Liddy and Tranzilli may have chosen different schools, they’ll still be seeing each other on the field as they both plan on playing for teams in the PSAC.

Liddy was considering Villanova, Shippensburg and Clarion in addition to Bloomsburg and hinted that it was not always his first pick, but once he got up to the campus and got a feel for the school he was convinced.

“I went up on my visit and I was kind of thinking to myself ‘ This is like a backup school I don’t really want to go here,”Liddy said. “And then I sort of met the players on the team and then just the atmosphere at Bloomsburg, I really enjoyed it.’

Tranzilli was considering Wagner, Bryant and Kutztown as well, but also said that the atmosphere at West Chester was what convinced him it was the right choice. He went into the process looking for a school with a similar feel to North Penn and thinks that is exactly what he has found.

Tranzilli, a three-year starter for the Knights and an All-Suburban One League National Conference second team pick last season, says he knew from the moment he decided to play high school football that he wanted to continue it in college, for a variety of reasons.

“Probably when I started to play high school football, because I knew if I could take it to the collegiate level I’d also be able to get an education too,’ Tranzilli said. “So I thought that was important to me that I could go to a pretty good school and play football.’

For Liddy, a first-team All-SOL National selection last year at defensive back, the process was a little different. Even after his junior year, he did not really think playing after high school was a possibility, but after some college coaches came to talk to him he realized he had piqued their interest.

As a coach it is always a proud moment to see your players succeed to a point where they can take their talent to the next level. North Penn head coach Dick Beck believes both these Tranzilli and Liddy possess certain skills that make them valuable to college programs.

“Colleges nowadays, especially when they are recruiting athletes, are looking for Number 1 durability and Number 2 they want you to be versatile, They don’t want to be pigeon-holed and I think especially with Mike he could be a guy that answers a lot of questions for them,’ Beck said. “Mike was probably the best athlete on our team last year as a senior; he can play multiple positions and could probably play wide receiver at Bloomsburg if they needed him to play that.’

As far as Tranzilli is concerned, while he does have versatility across the offensive line, his real value comes in his durability and reliability.

“He’s never missed a game due to injury and to be honest with you I can’t remember him ever missing a practice for an injury or anything.’ Beck said. “He’s been extremely durable, great leader, leads by example first on and off the field great in the building and we couldn’t be more proud.’

Based on the words of their coach, it looks as if these two PSAC schools have landed players with extremely bright futures who have the talent and versatility to help their program win for years to come.