Upper Dublin’s Stover is Times Herald Player of the Year 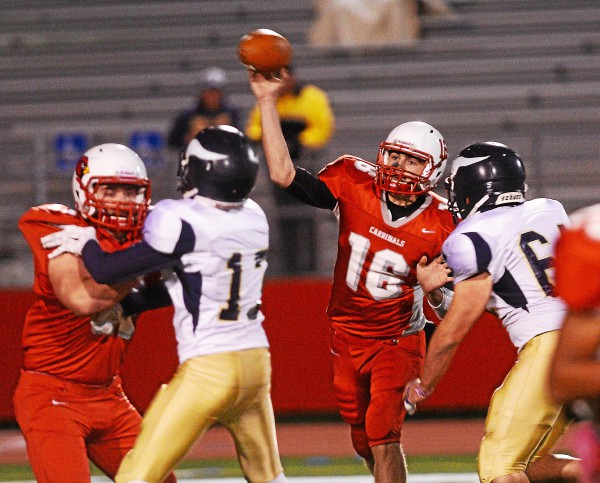 PPER DUBLIN — Ryan Stover’s season began under a cloud of uncertainty, and ended with his Upper Dublin High football team in the District One Class AAAA playoff semifinals.

In between, Stover and his Cardinals mates proved a lot of “experts’ wrong, chased away a ghost or two and struck a blow for their league, the competition level of which was considered by many to be one step above junior varsity.

And in the midst of it all was Stover, a talented, but unproven junior quarterback who had shown flashes in his handful of snaps as a sophomore that he had the size and arm to succeed at the varsity level, but little else.

That would soon change.

“With the weapons we had on the team, I thought we had a chance to be a very good offense,’ Stover said. “What I wanted to do was improve and learn as the season went on.’

Stover worked tirelessly toward those goals, paying particular attention to both his ability to read defenses and his quarterback footwork.

“Every camp I’ve ever gone to, all that kept being preached was footwork,’ Stover said. “That was something I worked hard trying to improve.’

Stover was already under the gun, due to the fact that his father, Bret, is Upper Dublin’s head coach. A former quarterback himself, the elder Stover, who first suggested to his son the idea of playing quarterback, went out of his way to treat his son no differently than he would any other Cardinals player.

But neither son nor father was naive enough to believe that charges of nepotism would surface.

“I got heat and I think I always will get heat about that,’ Ryan said. “But I think I proved I should have been playing, whether my dad was the coach or not.

“And really, outside of the team, I really don’t care what other people think.’

With his lack of varsity experience and the charges of favoritism hanging over him, Stover went out and simply confounded all of his naysayers with a season for the ages, setting school records for passing yardage (2,187 yds.) and touchdown passes (21) while taking the Cardinals to a place they’d never flown.

And through it all, the first-year varsity player looked the pressure of winning a league title and facing some of the district’s best teams in the glow of intense playoff pressure straight in the eye — and never blinked.

For his incredible season, Stover is the 37th recipient of The Times Herald Offensive Player of the Year.

“I would say yes,’ said Stover when asked if he’d reached his goals in his initial full-time varsity season, “and I think my dad would say the same thing.

“I know he told me that other coaches were telling him how much our offense and the things we were doing gave them fits, so I’d have to say I improved.’

Not that it came easily.

A year or two in advance, Coach Stover had applied to take his team to Florida to begin the 2014 season.

The Cardinals, young, but talented, had to face a highly rated Coconut Creek program at the Disney World Complex as part of the trip.

As far as the game went, Upper Dublin was put to the test when the weather forced the contest to start much later in the evening than expected.

“The whole trip was a great experience,’ Ryan said. “There was a lot of team bonding, and we really became closer as teammates.

“When the game got pushed back, all we wanted to do was stay focused. The trip was fun, but we wanted to win.’

And that’s what the Cardinals did, rallying for a 36-28 win in a contest that ended well past midnight.

A week later the Cardinals got past a much-improved Truman team, but came up short against Abington, a team much bigger, physically, than the Cardinals. Yet, undersized Upper Dublin held its own against the Ghosts, far from the last time that would happen this year.

“Our offensive line was not the biggest,’ Stover said, “but they weren’t going to be pushed around. They hung in with every team we played, and for that you have to give it to them.’

The Suburban One League American Conference schedule kicked in a week after the Abington loss, and the Cardinals met the challenge. And as the weeks passed, it became obvious Upper Dublin was headed for a winner-take-all showdown with Plymouth Whitemarsh.

And in Week Seven, the Cardinals got their shot at the reigning champs.

Like a pair of undefeated boxers, the Cardinals and Colonials went toe-to-toe with neither taking a step backwards.

A terrific goal-line stand at the end of the first half prevented PW from taking a two-touchdown lead into the break. But early in the fourth, the Colonials enjoyed a 28-21 lead.

That’s when Stover and the Cardinals went to work, first tying the game on what could be the play of the year, a fourth-down prayer while in the grasp of two PW defenders that somehow found a diving Matt Thompson in the end zone. And when the Cardinals defense staved off a fourth-and-two from midfield on the Colonials ensuing drive, Stover hit three straight passes, moving the ball as far at the PW 23.

From there, fullback John Lee scored on a 23-yard run, and the Cardinals had ended the PW streak and propelled themselves into first place.

“That was, by far, the most important game of the year,’ Stover said. “That was a hurdle we had to get over if we were going to do anything this year. When we won that game, we knew we could play with the better teams in the district.

“I always felt we had the potential, the biggest thing was gaining confidence. When we won, we felt we could beat anyone.

“It was as much mental as it was physical.’

Three weeks later, the Cardinals defeated Upper Merion to make it official — the school’s first SOL title since sharing the crown with Cheltenham in 2010.

District playoffs were next, but despite the program having gone 0-for-5 in its previous playoff appearances, Stover and his mates were not shaken.

“The work our coaches did to prepare us was incredible,’ Stover said. “We went into a lot of games feeling like we had (their opponent’s) game plan on both sides of the ball.

“They put in the hours, but our guys had to implement the game plan, and they were able to take in all of the details and make it work.’

That was obvious in the Cardinals first playoff game against Council Rock North, when the Cardinals put the skids to Indians’ future Division One quarterback Brandon McIlwain and claimed the program’s first district playoff victory, 48-14.

“It wasn’t that hard to maintain our composure as a team,’ Stover said, when asked about playoff nerves. “I felt comfortable with the guys around me. It was just kind of a trust thing.’

It was more of the same the following week, when the underdog Cardinals took over Bayard Rustin High, and Upper Dublin’s defense completely blanked the Golden Knights in the second half en route to a 41-23 win.

The Cardinals were thrilled with the win, but the talk rising around the district about Upper Dublin’s weak conference rankled Stover.

But by the district semis, the Cardinals had nearly everyone’s attention, although it was rumored that their semifinal foe, Pennsbury, had spent the week before the game preparing for probable district-final foe Coatesville.

Ignoring such talk, the Cardinals went in and gave the Falcons a scare and a half, leading at halftime before dropping a tough 25-14 decision, ending their magical season.

“We had a couple of hiccups,’ Stover said of the Cardinals’ play, “but the truth is, they were well prepared for us.

“Sometimes you just have to tip your cap. (Pennsbury) played well.’

Since season’s end, Stover has intensified his off-season football regimen, throwing to targets in his back yard and continuing with his footwork drills.

“I miss it,’ he said. “I’ve missed it ever since it ended, and I’ll work my butt off until the season comes around again.

“We’re not going to fly under the radar next year.’