Bristol looks to seniors to steady the ship against Morrisville 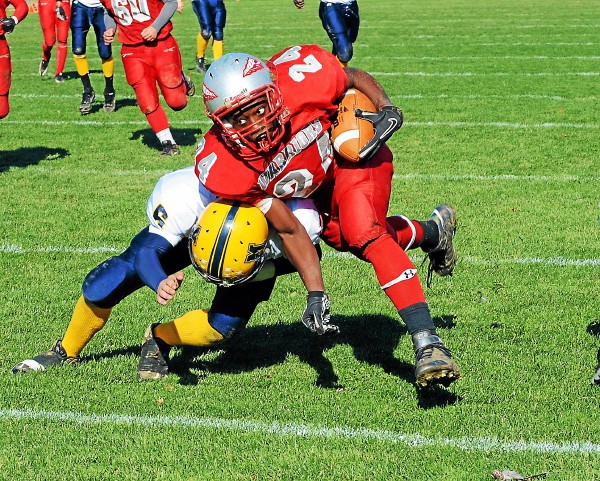 BRISTOL BORO — Grab your coat and hat — it’s on.

Bristol will battle Morrisville on Thanksgiving Day at Robert Morris Stadium. The last time these two teams met was 2011. The Warriors forfeited the game in 2012 because of a state playoff run and the Bulldogs passed last year due to a lack of personnel.

Bristol enters the game at 8-4, coming off a 1-point loss to Springfield (MontCo) in the District 1 Class AA championship Nov. 14 at Truman. The last time Morrisville — which is winless (0-9) — played was Nov. 1 at Bergen Tech.

“This kind of a game is such a rivalry that you can pretty much throw all the records out the window,’ said Plenski.

“It doesn’t matter what your record is in the regular season. Everything boils down to this game.’

One of the oldest rivalry games in Pennsylvania, the traditional Thanksgiving Day duel between Bristol and Morrisville goes back to 1928 when the Warriors notched the first of nine straight wins over the Bulldogs. Bristol leads the series, 43-36-4, making this game the 84th time the sides have squared off.

The last time Morrisville won was 1999, meaning the Warriors have won the last 11 duels dating back to 2000. (The battle did not take place in 2001 when the Bulldogs did not field a varsity team.)

This time around, in addition to home field advantage, Plenski says, Morrisville has had more time than the Warriors to get ready for Thursday’s battle.

“We know that they are going to come prepared,’ said the coach. “We just have to play our style of football and get composed after losing the playoff game two weeks ago.’

The last time the sides met in a Thanksgiving Day bout, Bristol standout running back Donte Simmons was just a freshman. Ahead 15-0 at the half, the Warriors went on to a 40-0 rout on their home field. Bristol took advantage of six Bulldog turnovers in the contest while Simmons rushed for 98 yards on 18 carries.

Morrisville got good production from Uriel Savage, who toted the pigskin 126 yards on 25 carries. The Bulldogs also took advantage of an onsides kick recovery on the opening kickoff.

It’s those kinds of plays the Warriors have to be on the lookout for on Thanksgiving, said Plenski.

“You are not playing for anything beyond Thursday so you have to be prepared for everything,’ the coach said. “They could come out and throw the ball 30 times and we would not be expecting it.’

One thing Bristol is looking for is a battle.

“Morrisville hasn’t had the kind of season that they wanted but they’ve had a couple weeks to prepare for one game.

“It’s the Thanksgiving Day game and it’s at their place so we know they are going to come out all amped up.

To counter that, the coach is counting on his seniors to steady the Warriors’ effort. On that front, he’ll get plenty of aid and assistance from Simmons and a receiving corps that includes three 12th-graders in Aidan Coughlin, Kyle Slivka-Fralin and Phil Krause.

Seniors Jeremiah Haywood and Robert Jones will steady the lines and seniors Anthony Jimenez and Jake Faight will anchor the linebackers.

For seniors like Simmons and Slivka along with junior quarterback R. J. Collins, the game has additional meaning as all three are going for season benchmarks. Already the lower Bucks career rushing leader with over 6,000 yards carrying the football, Simmons needs just 32 yards to reach 2,000 for the season. Slivka needs 87 yards in receiving yards to get to 1,000 in 2014 and Collins needs 103 passing to get to 2,000 in this campaign.

NOTES: Bristol last played Morrisville Nov. 1, 2013 with the Warriors emerging with a 67-8 victory on their home turf.