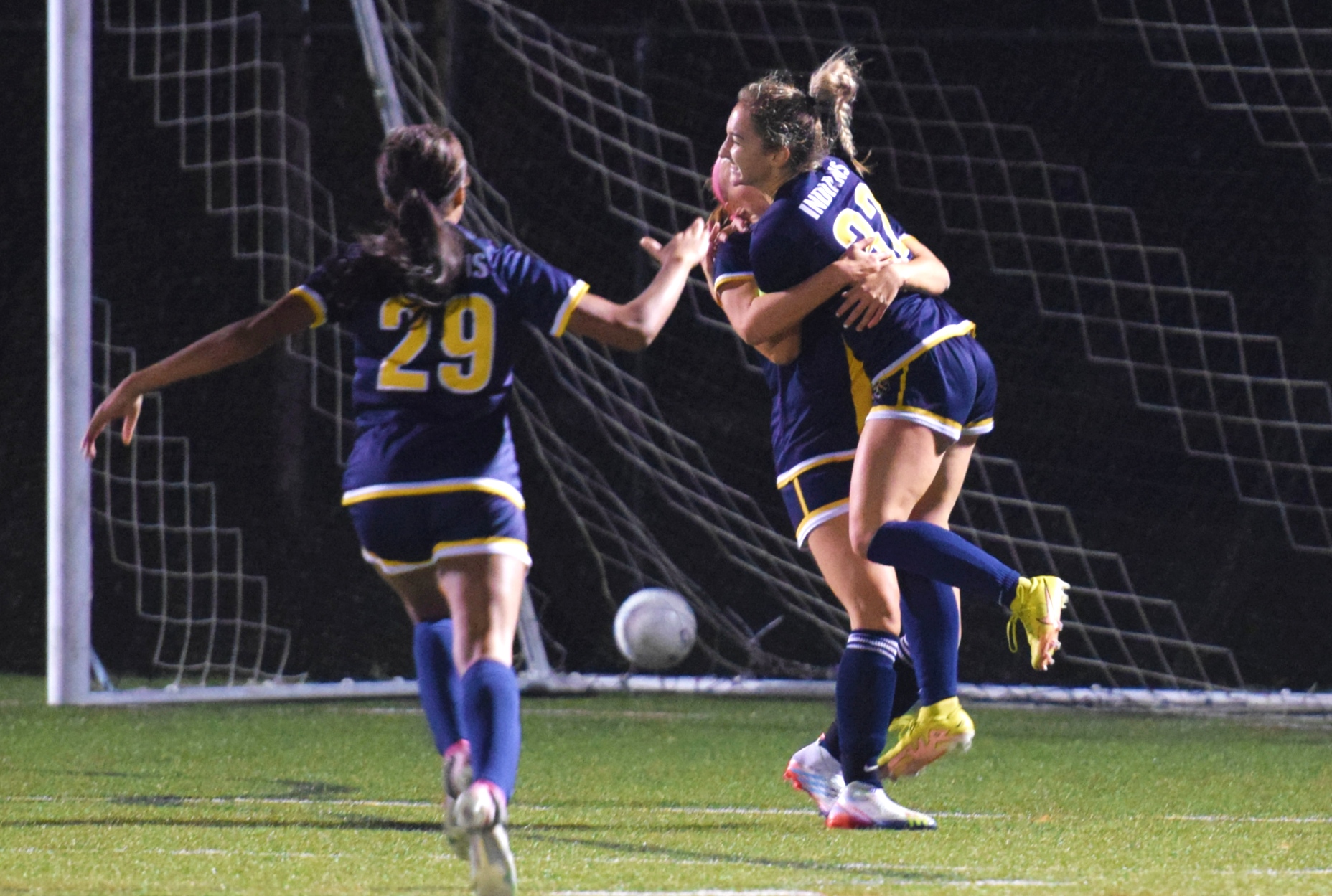 Upper Perkiomen's Kyra Lesko gets a hug from Sarah Fisher after scoring the game-winning goal against Gwynedd Mercy in a District 1-3A semifinal Tuesday. (Austin Hertzog - MediaNews Group)

PENNSBURG >> How’s this for stakes?

In that case Coach Freed, break out the silverware.

Upper Perkiomen’s dinner was served Tuesday night when senior defensive midfielder Kyra Lesko made a marauding run forward, received a pass from fellow senior Mary Kate Sitko and forced her close-range shot through the goalkeeper to give No. 1 seed Upper Perk a 2-1 overtime victory over No. 4 Gwynedd Mercy in a District 1 Class 3A semifinal.

The winner gets to go back for seconds: the Tribe’s victory earns it a place in its first 3A final and books a spot in the PIAA 3A Championships for the first time in Freed’s tenure. The two sides traded goals within three minutes of each other in the middle of the second half. Sarah Fisher put Upper Perk on top at the 24:55 mark before the Monarchs immediately answered when Caroline Drakeley headed in a back-post cross from Hannah Griffin at the 22:20 mark of the second half.

Upper Perkiomen needed a magic moment from its senior captain to give its undefeated season new life after getting all it could handle from a formidable Gwynedd Mercy side.

“Full credit to (Gwynedd Mercy),” Freed said. “Their pressure all over the field, they pressed us like no one has pressed us this year. We’re used to having that time on the ball. Even against good teams, we can get it. But we just had no time at all today.”

While Gwynedd bossed the first half and the game trended evenly in the second half, overtime was all Upper Perk. Sarah Straup, who energized the UP attack in OT, struck the crossbar four minutes into the extra period.

The Monarchs were pinned back from there, leading to Lesko, who has filled the defensive midfield position this year after returning from an ACL injury that cost her junior year, seizing a moment of high risk, high reward.

“I was really defensive the whole game. They have a really good offense so I was forced to be defensive,” she said. “When overtime came I knew we had to find a moment of glory.

“(Coach Freed and assistant Casey Lewis) pulled me aside at halftime and said, ‘You have the space. Go forward, take chances.’ I finally was able to apply that in overtime. I knew this could be the last game and I just needed to go.”

The ball found Sitko around 20 yards out and she carried toward goal while hearing Lesko call for the ball making a run past her left side like she was ‘shot out of a cannon’ in Freed’s description. It wasn’t a picture perfect connection but Lesko got a favorable touch that sent her free behind the defense. She managed to skirt her shot past GMA keeper Ellie Verrill (5 saves) and a crashing Ava Kolp for the winner at the 5:04 mark of the first overtime.

“We’ve been playing together forever so when I hear her calling for it and running up the field I know she’s so determined to get there and score,” said Sitko. “It was pretty compact and the defense was really close together so I needed to thread it through. She thankfully got a touch.”

It was Gwynedd Mercy’s second district semifinal in the last three years after reaching the final in 2020. Bill Dailey’s Monarchs rebuilt and this year’s finish was proof.

“It’s a little disappointing, but we’re very happy with our improvement after last year being very young and working with this same group,” said Dailey. “It’s been a great season. I think we should definitely be proud, especially these seniors – this is my fourth year here and with them – and to see them grow and get us to this place again has been a joy.”

Unfortunately for Gwynedd Mercy, Upper Perk was hungry for more.

“We knew it could be our last game and we hate losing at home,” said Lesko. “There’s a big group of seniors and we were all talking (at the end of regulation) saying, ‘This cannot be our last game.’”