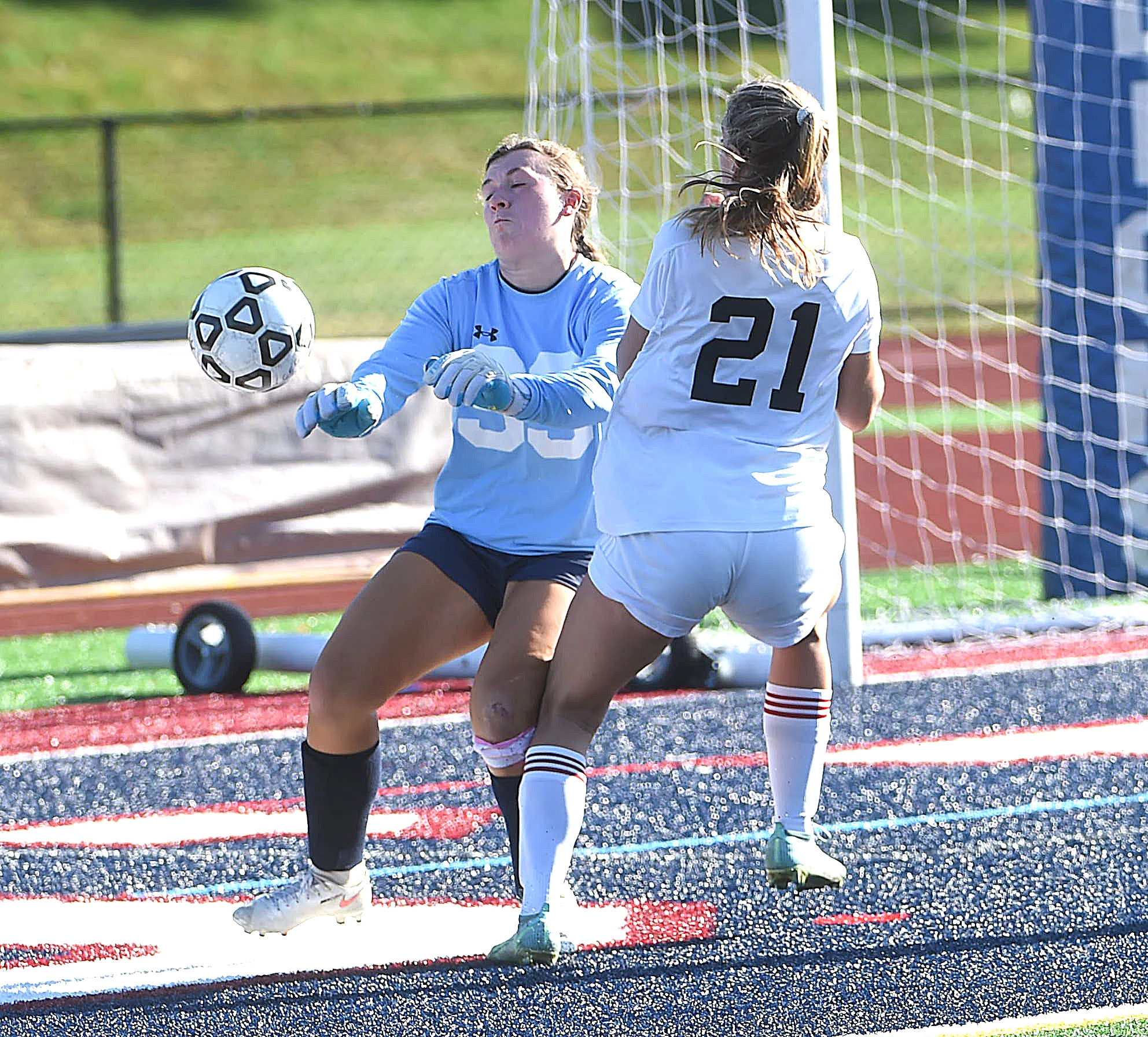 But after 100 minutes of soccer, they had no goals and a glum 0-0 draw with their Catholic League rivals to show for it. Over to Wright, the senior midfield architect of most of the Patriots’ near-misses: “I feel like in their eyes it was a win today, and in our eyes it was a loss,” she said. “Even though it was a tie, we should’ve won that game.”

Ava Hneleski’s 15 saves were the prime reason why they didn’t, but Wright’s point is hard to argue. The Patriots enjoyed one-way traffic for large stretches, but that final touch in front of the goal eluded them.

They thought they’d found it plenty of times. There was Wright’s chip from 35 yards, after her free kick was beaten back by the wall, that Hneleski punched over the bar in the 23rd minute. There was Ava Bleckley’s shot that Brigid MacGillivray cleared off the line in a corner-kick scramble late in the first half.

There was Julia Curran’s header of a Wright corner kick that thumped the post to the left of a grateful Hneleski in the 63rd. And there was the rising shot by Olivia Stout with four minutes left in regulation that rattled the underside of the crossbar and crashed down on the turf just shy of the goal line.

The first overtime just about ended with an effort off the head of center back Sophia Verlinghieri that Hneleski pinned up against MacGillivray and held. Bleckley had a pair of shots blocked in dangerous one-v-one situations in the second extra session.

“It just comes down to finishing,” Wright said. “Our defense plays good most of the game, and it’s just simple mistakes that we had that cost us games. I thought today, we should’ve had the win.”

Sometimes, it also comes down to a goalie like Hneleski. The junior isn’t the tallest of keepers. But she defends her line bravely, more than once throwing herself at a ball to kill a play. Her senior center back tandem of Maddie Ellis and Makenzie Wilson worked well to ensure she got shots she could handle. Archbishop Carroll’s Oliva Stout fires a shot as Cardinal O’Hara’s Maeghan McLain closes her down in the first half Thursday. (PETE BANNAN-DAILY TIMES)

“Ava’s the best there is,” Ellis said. “She gives it her all. She’ll dive for everything. And we have really good chemistry, so if I know that she’s able to come out and get a ball, I know I’ll be able to shield the girl for her, and there’s a lot of balls that I can count on her to save.”

The Lions weren’t spectators the whole way. They could’ve opened the scoring two minutes in, when Carly Coleman latched onto a ball played forward into space and Bridget Robinson had to rush off her line to snuff out the danger. Robinson made four saves, including two in the second extra session against an increasingly assertive O’Hara attack.

Coleman was thwarted by the goal frame in the 72nd, her free kick from 28 yards striking it flush. The Lions had a penalty shout in the final minute of regulation when Robinson clattered into Greta Miller after the ball had gone, but the referee waved play on.

That meant more of the same for the Delco Catholic League foes, who sit seventh and eighth in the nine-team PCL. It’s the sixth time in eight league games that O’Hara has been blanked. Since starting with six goals against Bonner & Prendergast, Carroll has scored just once in four league outings.