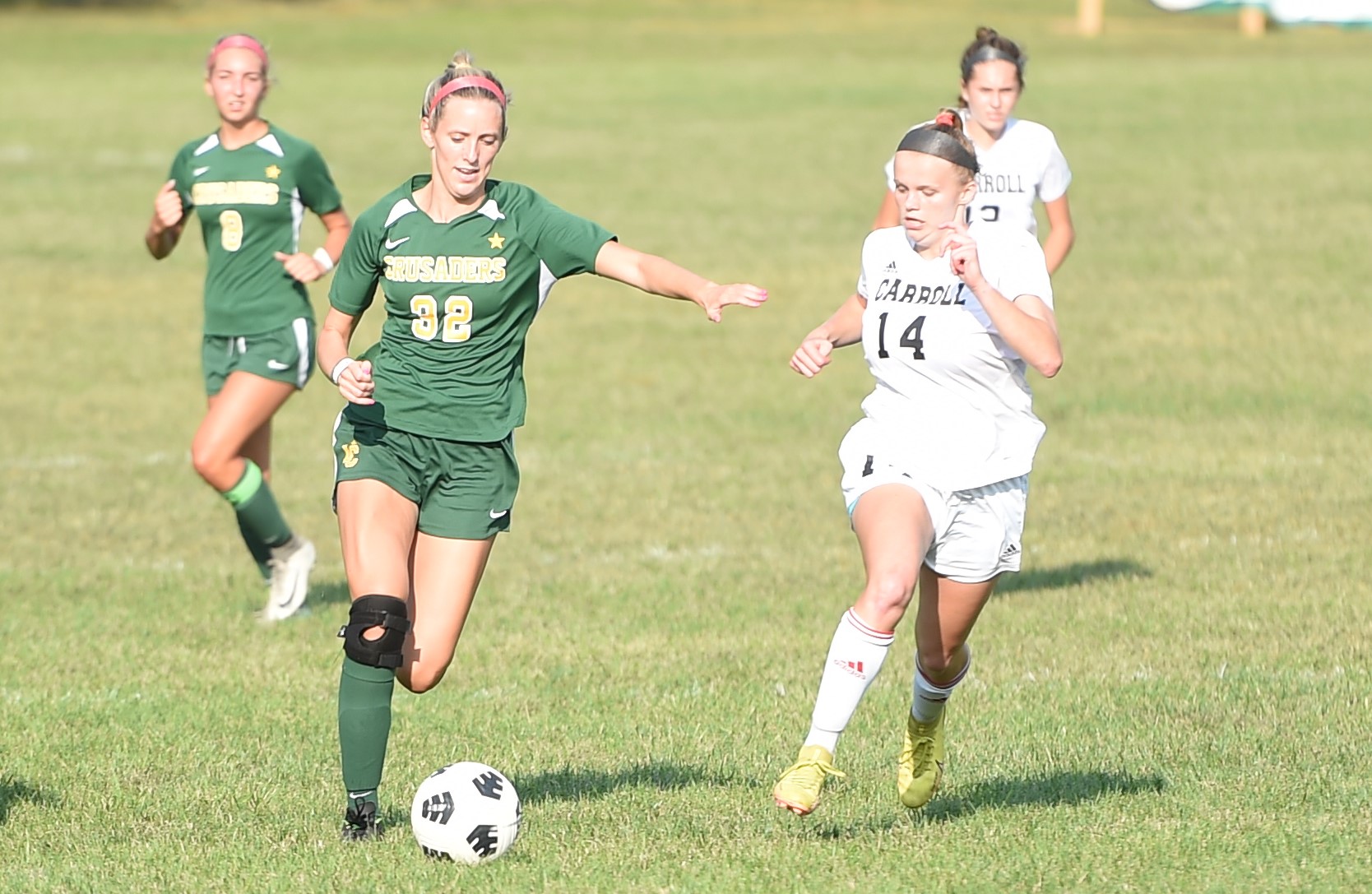 LANSDALE >> Whether it is soccer or lacrosse, Emily Simpson is going to bring an attacking mindset to whatever field she is competing on.

“I might not be the most technical but I feel like my drive and hustle to the ball is something I carry in both sports,” she said.

With the Philadelphia Catholic League contest still scoreless in the second half, Simpson got enough of the ball with her foot on a leaping effort to send it past the Patriots keeper with an unfortunate touch by a Carroll player knocking it into the net.

“In our passing game, our outside mids and our center mids have been doing a really great job of playing the forwards the ball and that’s just what happened there,” Simpson said. “Carolyn (Moore) played kind of a floater and I was just able to get a touch on it over the goalie’s head.

“I mean, I think it was a lucky shot but it was still a goal.”

Lansdale Catholic’s Emily Simpson (32) gets a touch on a ball to send it past Archbishop Carroll goalkeeper Bridet Robison, the ball then knocking off a Carroll defender for a goal in the second half of their game on Wednesday, Sept. 14, 2022. (Mike Cabrey/MediaNews Group)

And it ended up being the day’s lone tally as the Crusaders maintained their perfect record with a 1-0 victory over the visiting Patriots.

“What I’ll credit my group with is at halftime we made some adjustments that helped us spread the ball out a little bit more than what we were doing in the first half,” LC coach Bree Benedict said. “I think, for Carroll, they wanted it to become a one-v-one battle cause they’re very athletic and they’re very good defenders. So I think we did a better job in the second half trying to create those two-v-ones and different stuff so that it wasn’t a one-v-one game where they weren’t going to be the top player in it.”

Lansdale Catholic (4-0-0, 2-0-0 PCL) pressured from the start and got its best chance before halftime when Megan Steinbach dashed into the 18-yard box and was taken down for a penalty shot but her try from the spot was sent over the crossbar.

“I think I just got in my head a little bit,” Steinbach said.

The plan for Archbishop Carroll (3-5-0, 1-1-0) to hold off LC and find an opportunity to counterattack had the Patriots even after 40 minutes and was still working after the break until Simpson finally made one of LC’s pushes towards goal a productive one.

“We scouted them, we had a pretty good idea who they are and it is what it is,” Carroll coach Tom Quintois said. “We worked really hard, our team is really athletic and fast and we put a lot of pressure on teams. We were just trying to generate one chance.” Simpson with an airborne kick got a piece of ball to put it past the keeper while a Patriot defender looking to clear it ahead of the goal line had it knock off her and in for a 1-0 LC lead.

“It’s a tough way to lose but, look, they’re a really good team, they’re well coached and it’s just a bad bounce I don’t know what else to say,” Quintois said. “But they deserved to win today so the right team won and it is what it is.”

Simpson missed her junior soccer season with a knee injury but played lacrosse in the spring, collecting her 100th career point in a win over Archbishop Ryan and earning All-PCL second team honors. She is committed to Bloomsburg for lacrosse.

“What she does is a really great job of is making a screening run in front of a defender or screening run in front of the keeper which I think is a skill she’s picked up at lacrosse and kind of found a way to apply it in the game of soccer,” said Benedict of Simpson. “I think it’s magic what she gives us. There’s not a lot of kids that will make that near-post run and be able to get a glancing touch on it like she can.” The Crusaders, who last year fell to eventual champ Archbishop Wood in the Catholic League semifinals, have started 2022 with four straight victories. LC topped Baldwin School in its opener down in Ocean City, New Jersey, picked up a nonleague win over Souderton then began this week with a 2-0 PCL win over Conwell-Egan Monday.

“I’m really excited for the rest of the season,” said Steinbach, committed to Rhode Island for soccer. “We have such a tight-knit group and I think that’ll take us really far into the PCL and potentially into states.”

Lansdale Catholic next plays Tuesday as it visits George School at 4 p.m. in the first of four straight road games. The Crusaders do not have a home game again until Sept. 29 against Archbishop Ryan.

“This is a group that’s seen things maybe not go our way, this is also a group that won a state title as freshmen so they know what it takes,” Benedict said. “And I think this year has been a great culmination of it’s one game at a time. We haven’t looked past what the next one is.

“We know our next one’s the George School, it’s a nonleague game which is good for us, gives us a chance to try some different things. But we’re really just going one game at a time and trying to stay focused on the actual moments in the game and not look at the big picture just yet.”

Archbishop Carroll has been busy in the early portion of the season having already played eight times – splitting its first four before dropping three of its last four. The Patriots next play Friday, Sept. 23 when they visit Chichester.

“We purposely did it,” Quintois said. “Because I love going into the backend of the season now starting next week we’re going to be able to train more and play less and have less games then when we’re a little bit tired and not be as fatigued as I think we’ve been in the past. So we went a little more heavier now, we’re giving them breaks now and we’re going to get to back at it.”

After Simpson’s goal, Lansdale Catholic got a quality chance after Ava Mercier was fouled just outside of the box. Delaney King put a shot on goal that was saved but the goalie could not hold on to the ball. Simpson, however, could not get a foot on the rebound and after Mercier knocked it into a crowd, the Patriots cleared the ball out of the box.

“I feel like a part of the game we were playing against ourselves a little bit,” Simpson said. “But I feel like our effort and our intensity and play the second half improved a lot from the first half.”