Mercury All-Area: Humble star Weaver sets the tone on and off field for Owen J. Roberts in capstone season 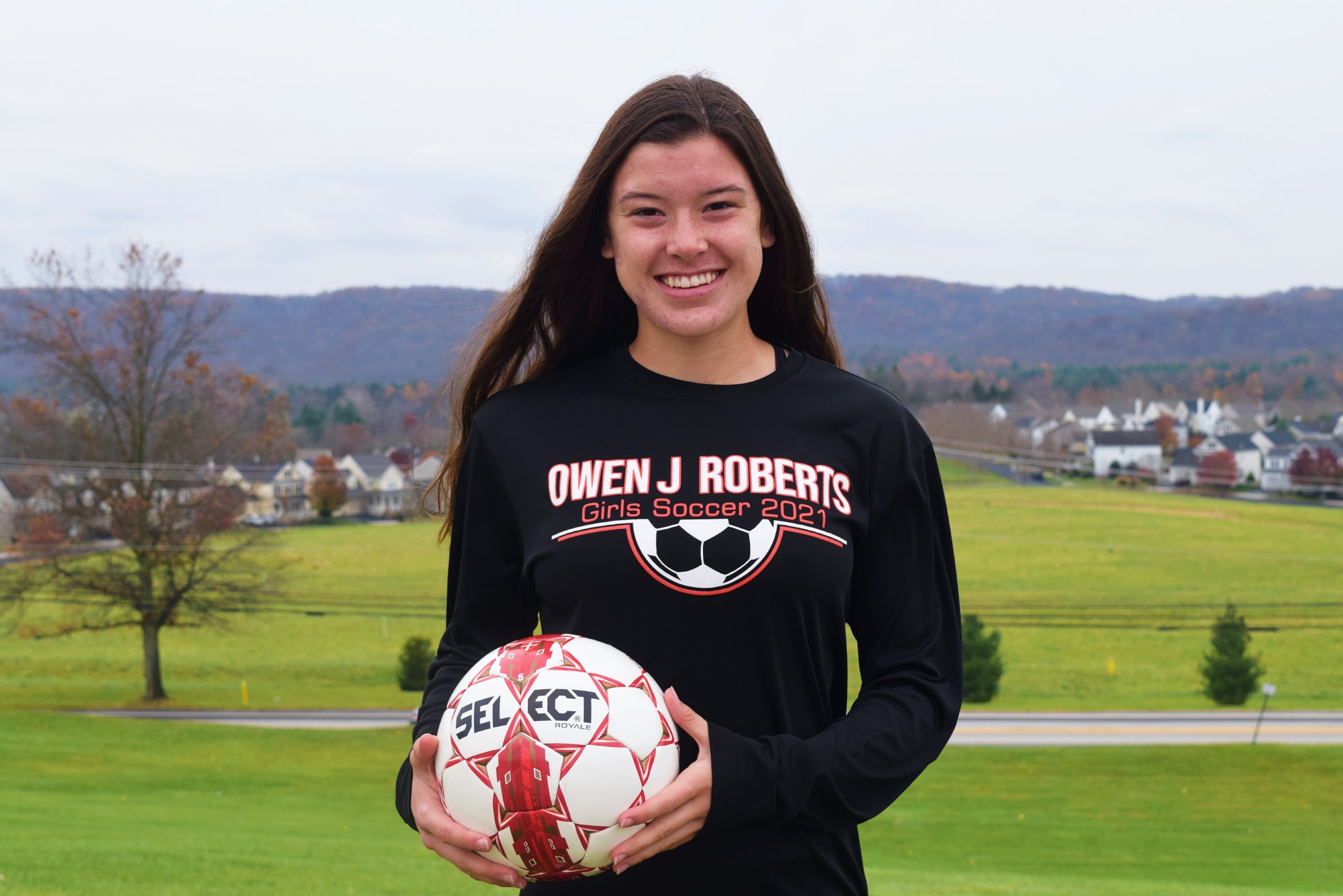 The Owen J. Roberts girls soccer team forms a horseshoe for starting lineup introductions. Each starter runs through the makeshift tunnel as their name is announced for high-fives and hype.

It’s a warm ovation for the first 10. But when No. 35 – Morgan Weaver – is introduced, the energy changes.

“When the girls were announced for games, they would all clap for the person being announced,” said OJR head coach Joe Margusity. “But when Mo got announced, the enthusiasm went up to a crescendo.

“That marks a great player and teammate. The kids would run through a brick wall for her.”

Rarely has a team latched on to the personality and play of its leader like the way the Wildcats did this fall to the four-year starting defender and team captain.

It took Owen J. Roberts to great heights as an undeniable defense led by Weaver allowed only seven goals in 26 matches on the way to a 22-3-1 campaign that featured a second consecutive Pioneer Athletic Conference championship, a run to the District 1-4A championship game for the first time since 2006 and advancement to the PIAA quarterfinals.

Weaver is one-of-a-kind: she is the first four-time All-Area first team selection ever in girls soccer.

She is also the Mercury All-Area Player of the Year. Weaver brings the honor back to OJR after Mahogany Willis (2017) and Kylee MacLeod (2018) most recently were the area’s best. The Boston University signee was already a standout player as a freshman in 2018 as evidenced by her first team selection, but her signs of growth were vast over her scholastic career.

Technically speaking, she had a lot of room to grow from when she was a complementary piece on the 2018 PAC championship team.

“There’s a running joke, over the summer we do this freshmen picnic and all the freshmen get a gift from the upperclassmen,” Weaver said. “My freshman year I got a mini drone because I couldn’t flight the ball. And it was completely true. In warmups we do defensive long balls and I could not get the ball in the air.

“We were talking about it at our last practice, to go from not being able to flight the ball to now kicking 45-yard goal kicks, it’s a big change.”

Weaver also showcased the ability to carry the ball through the midfield as a senior, a clear sign of her increased ability and confidence in her final year.

“She really worked on her game. This year what we all saw was another growth in her game which was her ability to carry the ball forward,” Margusity said. “We’re not talking 10 yards, we’re talking 50 yards. She may have made more impressive runs through the midfield than anyone.”

“The high pressure was a big part of our play,” Weaver said. “Everybody knew who their mark was. We had a fast back line but we couldn’t rely on our speed all the time. Getting the pressure up high first was a key part.”

Weaver also helped freshman left back Ashly White and freshman goalkeeper Rachel Epps, who was in goal most of the season in place of injured starter Colby Wasson, negotiate their first varsity experience, which makes the Wildcats’ scoring record even more impressive.

“I do take a sense of pride in (allowing only 7 goals all season),” Weaver said. “But it’s not just the back line and the goalie’s defensive record, it’s the entire team’s defense. Our defense starts from our center striker all the way back to our keeper. Even with a keeper change and a couple changes in the lineup, it’s a whole team accomplishment.”

“I always say the difference between a good player and a great player is the great player makes everyone around her better,” said Margusity.
Margusity, the winningest coach in Pa. girls soccer history, has had countless players come through the Owen J. Roberts program in his 27 seasons. Humility will be one of Weaver’s indelible marks.

“Her humbleness, I’ve never seen a superstar at Owen J. be more humble than her,” said Margusity, who also hailed Weaver’s loyalty to playing high school soccer and staying with her FC Providence club team.

“It’s just who I am,” said Weaver, who credits parents Chris and Michele Weaver for the trait. “In general I try to go out of my way to say something kind to someone else or make someone’s day. I feel like everybody is going through their own struggles and if I can be the person people smile about that’s what I want to do.”

A team’s best player being its kindest isn’t typical. But it went a long way toward the success and happiness of OJR this fall.

“Mo would also give credit and compliments to how good others were,” Margusity said. “She would say to the kids on the bench, ‘Thank you for cheering me on, it makes a difference to me.’ That makes everyone feel like they are contributing. Mo was such a calming effect on everybody.”

The atmosphere may have been right around the Wildcats, but the results needed to be right, too. For Weaver and her classmates, this was their big opportunity to contend for district and state hardware.

“I think a lot of how we played this year was because it was probably our one big chance,” Weaver said. “A few years ago you gave us the nickname ‘the WildKittens’ because we played a bunch of young girls so now we were juniors and seniors and this was our year to make something happen.”

In 2020, OJR shared the pandemic-altered PAC championship with Spring-Ford and were knocked out of the single-elimination District 1 tournament by their PAC rivals in the quarterfinals. Weaver was named to the Pa. Soccer Coaches Association All-State team and was an All-American nominee, which made her intent on being even better as a senior.

The Wildcats were head and shoulders above the rest of the PAC this fall, going undefeated against league opposition in the regular season (13-0) and winning the PAC title game over Upper Perkiomen, 3-0, on Oct. 21.

OJR’s scoring slowed in the postseason and the margins slimmed greatly, the Wildcats winning their first three rounds either late or in overtime of 1-0 wins in the District 1-4A playoffs to reach the championship. The Wildcats were denied the district crown against Downingtown East, a blown offside call in the first overtime relegating OJR to runner-up.

The Wildcats dominated Wilson 2-0 in the first round of the PIAA Championships but ran into eventual champion Moon in the quarterfinals, a 1-0 season-ending defeat.

Weaver and the Wildcats fell short of their ultimate goal, but not short of a special season.

“In the beginning of the season we run North Carolinas which are basically sprints up and down the field, and the last 3 that we run we yelled ‘This is for PACs’, the second was for districts and the third for states,” Weaver said. “Those are our three goals every year. We got the PAC this year, we made it to the district final so that one kind of counts, and in states we got to the quarterfinals, so not quite. We didn’t achieve all of our goals, but as a team and personally I’m beyond proud of this season.

“It is more than I could have asked for especially for my senior year.”