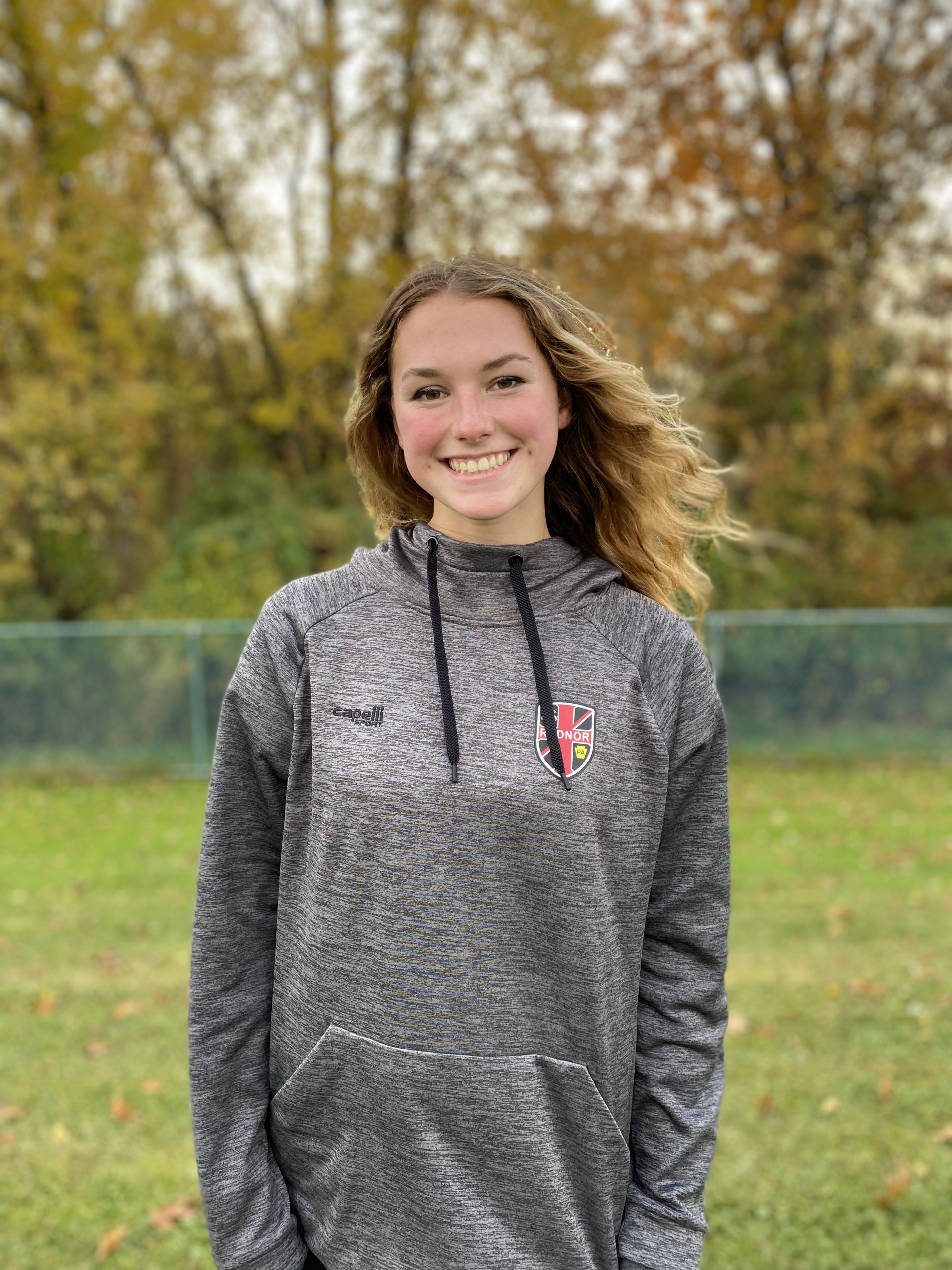 The sophomore goalie posted a regular season goals-against average of 0.89, including 10 shutouts. She posted three more shutouts in the District 1 3A playoffs, and was not scored on in the Raptors’ run to capturing the District 1 championship. Toomey had several huge saves in Radnor’s state playoff opening round win against Greencastle-Antrim, the Raptors’ first state playoff win in 21 years. Radnor girls’ soccer head coach Jake Solderitsch said, “Mallory is a fierce competitor and extremely dedicated to improving her craft.  As a sophomore she has really taken on a leadership role, and her commitment to her teammates is second to none.  Her passion for playing the game and competing at the highest level inspires her teammates to match her intensity and drive.” Toomey is a three-sport athlete at Radnor (soccer, basketball, lacrosse).

Q: How do you see your leadership role as a goalie?

A: Being a sophomore, I know that my leadership role doesn’t come close to that of the seniors or captains; they’re the real leaders of this team, and have been since the start of the season. However, because I constantly have a view of the field from one of the best vantage points on the field, it does help for me to contribute what I think and notice during both halftime talks and huddles. What I want the most for every single person who’s been a part of Radnor’s journey to the state tournament is simple – success, growth, and opportunities to leave their mark on the game. If anything I say or do allows them to have a chance to do exactly that, I’ll do it 10 times out of 10.

Q: You made a memorable double-save play in the Raptors’ opening round state playoff win against Greencastle-Antrim. Can you describe how the play unfolded, and your role in it?

A: A striker ran into my box and shot it left, to which I dove and parried it a little outside the left post (although still in bounds.) While I was still on the ground, in the process of getting up, she intercepted the rebound and passed it across the goal to a runner on the right post. The runner shot it right, and I leapt to the other side of the net, parrying that shot away too.

A: On-field communication is easily one of the most important aspects of the game. If you don’t communicate with your teammates, they’ll have no idea if someone on the other team is putting pressure on them, if you’re open, or if they need to move the ball quickly. Additionally, miscommunications happening in games, especially at higher levels, can mean instant turnovers, which, in some situations, can lead to goal-scoring opportunities. Calling for the ball and calling others off it are so crucial to the flow of a team; plus, the more teams communicate, the better they are at playing as a unit.

Q: Have you always played goalie? What sparked your original interest in the goalie position? Who have been your biggest mentors as a goalie, and what was the most important thing you learned from each one?

A: I’ve been a goalkeeper essentially ever since I started playing soccer. My older brother, Ben, was the goalie on the Radnor’s boys’ varsity soccer team, and I’ve looked up to him ever since I started playing soccer. Actually, he was the entire reason I got into goalkeeping; I admired him when I was younger, because he was absolutely incredible in the net. Ever since I watched one of his high school soccer games, I knew that I wanted to be like him. He’s taught me lessons about the game that have changed the way I play. When I need someone to go to regarding mindset, my game, or even just help dealing with the pressure that comes with being a goalie, Ben is the first one I call. In addition to my brother, I couldn’t have grown this much without my club team, Steel United. Both the goalie trainers and coaches are top-notch, and constantly push me to be the best I can on the field. Without their help, I wouldn’t be half the player I am today.

A: The strongest aspect of my game, I’d say, is my ability to communicate; I’ve grown into being a vocal goalkeeper. As an athlete, however, I’m always working to be the best I can be. One specific part that I’m working to improve is my goal kicks. As of now, for high school, my center-back Olivia Kelley takes them for me.

A: To pre-game prep for a game, most of the time I listen to music. Specifically, Eminem; I describe the way he raps as being “aggressive rap,” and it puts me in the right mindset to come out hard and intense right at the kickoff.

Q: Year wear uniform jersey No. 00 – why did you pick this number?

A: 00, out of all the numbers that goalies wear, has always been my favorite. For one, since it’s not a real number, I think it’s unique and tough. The way I see it, if I’m going to wear a number like 0, I might as well wear two of them.

Q: Tell us a little about your club soccer career. What has been your most memorable experience in club soccer – can you share it with us?

A: The most memorable experience I’ve had in club was getting the opportunity to participate in a national soccer camp. On Steel United, players from different states are invited to come together and compete for spots on the roster of one team that later goes to Las Vegas. It was an amazing experience, and I’m grateful that I had the chance to be a part of it.

Q: What is your favorite academic subject at Radnor?

A: My favorite academic subject at Radnor is English. I love to write, specifically creative and argumentative writing.

Family members: “I am the youngest of four children. My older sister, Molly, teaches special education in Philadelphia, my brother, Ben, is graduating in December at Penn State, and my other brother, Robby, is a senior at Radnor High School and plays on their varsity hockey team. My mom is a 5th grade elementary school teacher, and my dad is a product liability lawyer.”