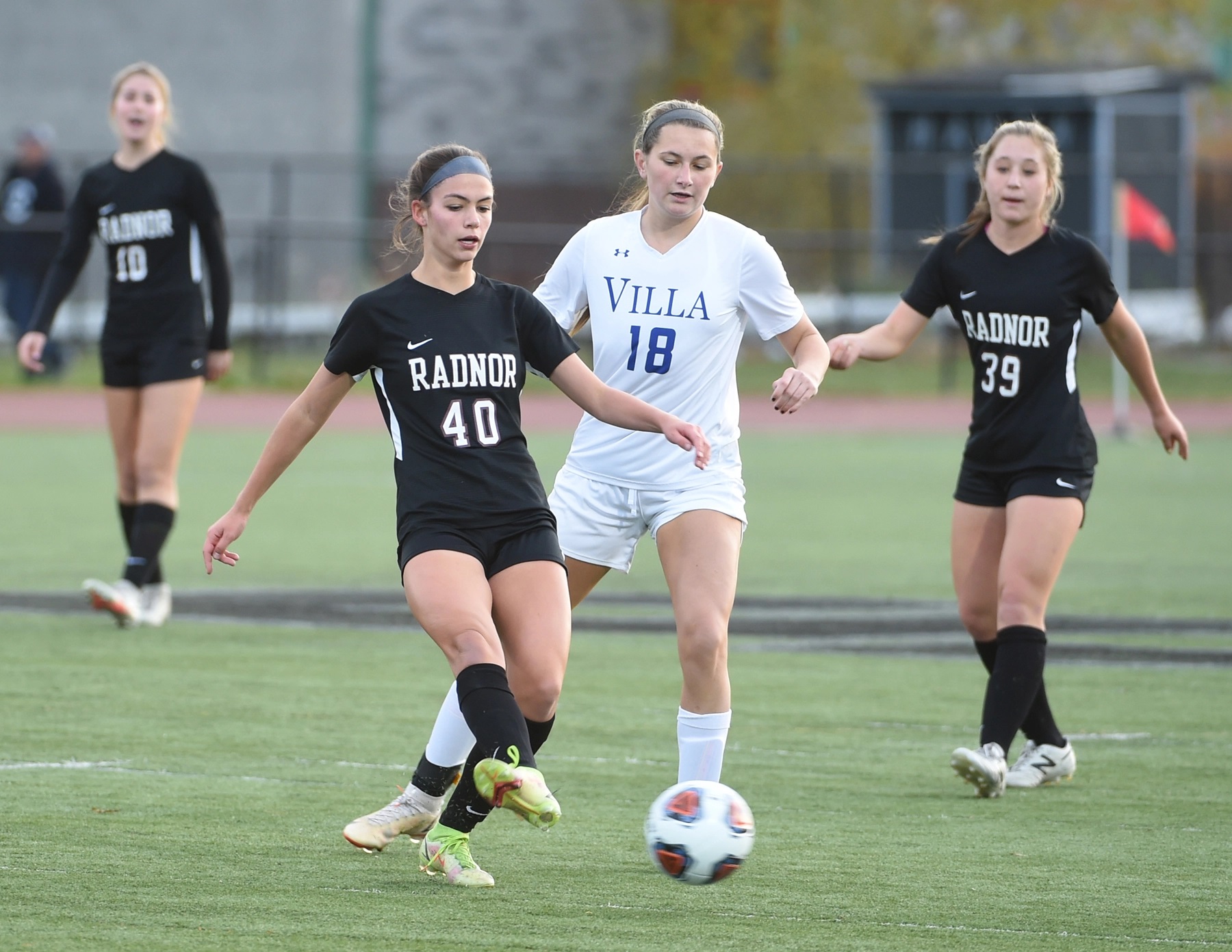 Radnor's Emily Daiutolo passes the ball in the first half of the District 1 Class 3A final last week. Daituolo's penalty in the 78th minute pushed Radnor to overtime in a 2-1 win over Northwestern Lehigh in the PIAA Class 3A quarterfinals Saturday night. (PETE BANNAN - DAILY TIMES)

EXETER TWP. — From the tears streaming down Ivy Chaskelson’s face at the final whistle Saturday, it was hard to tell if Radnor’s girls soccer team had won in overtime or lost.

As one Raptor after another melted into tears, the chain reaction starting once Chaskelson embraced Jane Daiutolo, the provider on her game-winning goal, the weight of the moment landed.

Radnor had come extraordinarily close to playing its final game – 97 seconds to be exact, to say nothing of the 16-plus minutes of extra time. And for a group that has grown so close, through a pandemic and a District 1 title and two states games, that urgency hit home and hit hard.

“I ran to Jane and we both started bawling,” Chaskelson said. “… I love everyone on the team. It’s just, if I didn’t see them again, I’d be so sad.”

Chaskelson guaranteed that Radnor would etch at least one more chapter into its journey, her overtime goal seeing off Northwestern Lehigh, 2-1, in a drama-filled affair at Exeter High School. Now Radnor moves on to the PIAA Class 3A state semifinal Tuesday against District 12 champ Archbishop Ryan, which downed Mifflinburg in double overtime Saturday.

As if the players didn’t provided enough compelling action – an early goal from NW Lehigh’s Sophia Motolese, Emily Daiutolo’s game-tying PK in the 78th, then Chaskelson resolving a tense OT – the mix was spiked by a delay of one hour and 41 minutes due to a power failure at Don Thomas Stadium. Hence a 3:30 kickoff that ended after 8 p.m.

But Radnor (19-4) made that delay work. It trailed from the 13th minute thanks to a brilliant free kick by Motolese from 30 yards out. The foul that led to it was soft, but Motolese smartly restarted quickly, her lofted shot riding a tailwind to sail just under the bar and leave Mallory Toomey no chance.

That didn’t sit well with Radnor in an otherwise even first half, before the halftime power outage.

“I think we were all nervous about losing our energy when we were in there and losing our intensity,” Jane Daiutolo said. “But we all agreed that that was a sign from whatever that we were going to finish this game and come back. As soon as we went in there, we were like, something just happened to distract us because we’re going to win that game.”

Northwestern Lehigh (21-2) managed to stalemate Radnor’s potent midfield in a way few teams have recently. With Samantha Bardonner as the backline shield and Camryn Fitch and Olivia Motolese operating as roving destroyers, they withheld from Radnor’s trio of the Daiutolos and Kate Boujoukos the time and space to carve them up.

“I think we knew we were the stronger team,” Jane Daiutolo said. “We held a lot of possession and we were playing our game tonight. We played a really pretty style of soccer. And we knew that they had that lucky goal, but we were going to get it back.”

Even in the second half, as Radnor switched to three at the back and poured forward in waves, the Tigers were moments away from finishing the job. Naomi Glassberg needed to make just two simple saves in the half. The corners piled up, but so did the clearances from the Tigers’ defense.

That is until Radnor turned to speedy junior Lyla Wallis, her straight-line quickness aimed at getting another body in the box. It paid off in the 78th when she was tripped up by NW Lehigh centerback Sarah Yeakel, who was otherwise excellent. The referee pointed to the spot, and Emily Daiutolo lashed the PK right down the center.

“My hands were shaking,” Jane Daiutolo said. “I was super, super nervous. But she was super composed going up and as soon as she took it, I knew it was going in.”

Glassberg stopped Boujokous from distance and a weak Chaskelson header in the first OT, while Toomey caught Motolese’s effort to duplicate her goal on a similar set piece. That left Chaskelson, who scored the game-winner in the first round of states against Greencastle-Antrim, to reprise her role as hero.

And to make sure the real, hard tears have to wait until at least Tuesday.

“Everyone was upset and thinking that it could be our last game together,” Jane Daiutolo said. “Us graduating seniors, we always get scared because we love these girls, we love the underclassmen. This has been such a great experience and we want it to go as far as possible.”