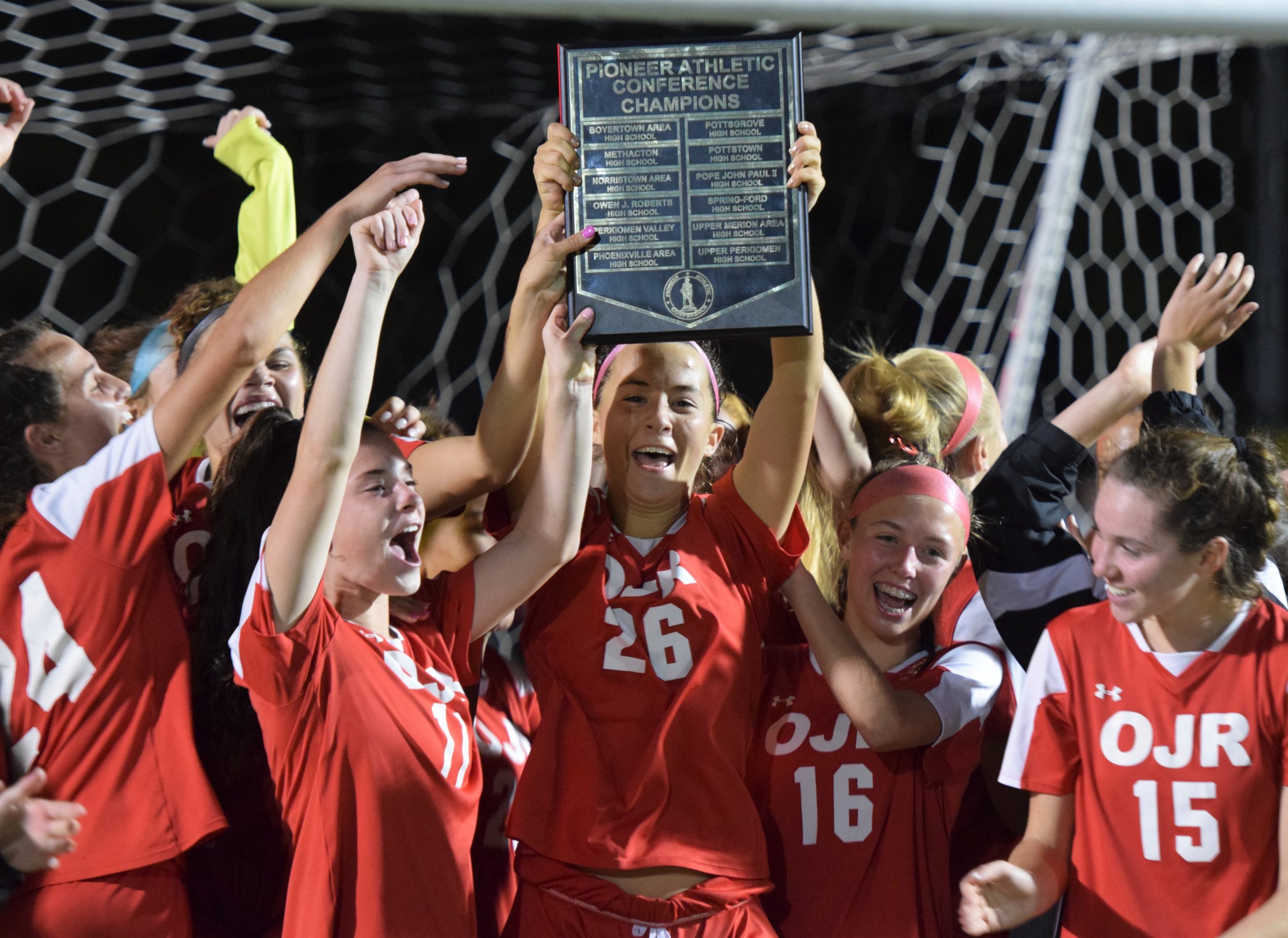 BUCKTOWN >> Over the 20-game season to this point, Owen J. Roberts’ girls soccer team has allowed a stingy five goals in total to opponents.

However, one of those came just before halftime in Tuesday’s semifinal against Pottsgrove, forcing the Wildcats to play from behind for one of the only times in 2021 and requiring some late heroics to advance and host Thursday’s championship game against Upper Perkiomen.

The Wildcats clearly were not interested in a repeat performance. OJR struck early and locked down the back end to secure a 3-0 victory over Upper Perk and complete a flawless PAC campaign with their 14th girls’ soccer title under coach Joe Margusity.

Wildcats are the 2021 PAC champions pic.twitter.com/xGkqvnNODI

For the Wildcats (18-1-1), it’s their fourth PAC championship in five seasons. They won the 2017 and 2018 Final Fours before having their run interrupted by eventual PIAA champion Boyertown in 2019. OJR split 2020’s title with Spring-Ford.

Therefore, despite the program’s recent track record, Thursday was the first chance for many of the current Wildcats to celebrate a traditional PAC title.

“It definitely makes it more special,” said junior Alexa Vogelman, who led Thursday’s effort with a goal and an assist. “I love playing at home — I think we all do — and having our “Cat Pack” (student section) show up gave us some extra energy.” An evenly played opening 15 minutes turned subtly — then suddenly — in the direction of the hosts.

Olivia Thompson’s two quality chances were highlighted by a volley off the crossbar, but in the 22nd minute, Margusity inserted sophomore Emerson Storti, who immediately took consecutive corners. The latter found the unoccupied head of Sydney Garner, who made no mistake in giving the Wildcats an early 1-0 lead.

“Recently, I’ve been getting better at taking corners,” said Storti. “It’s all placement — and Sydney made a great play. We’ve been friends since elementary school, and it was a great feeling to have her on the other end.”

Ten minutes later, Avery White found a cutting Vogelman down the center of the area to double the lead. Vogelman attempted to return the favor minutes later, but Upper Perk keeper Gabby Neal (eight saves) thwarted the attempt before White could get a touch.

“We have great chemistry throughout this team,” said Vogelman, “and tonight we were able to execute the entire game. That goal was exactly what we work on at practice.”

The Tribe’s best chance came when a long ball chased OJR goaltender Rachel Epps off her line, but defender Morgan Weaver was in perfect position to stop Sarah Fisher’s foray from the top of the box, as the ‘Cats took a commanding — for this team — 2-0 lead into the break.

Thompson made one of her repeated chances count five minutes after halftime off a feed from Vogelman, expanding the OJR advantage to 3-0.

“It’s defense all game, every game — for the whole team, not just the back line,” said Weaver. “And when we get a lead, there’s no letdown, no time to relax.” Epps, only a freshman, has filled in admirably for Colby Wasson throughout the campaign. She finished with four saves in Thursday night’s shutout.

“I can’t say enough about how Rachel’s played in her absence,” said OJR coach Margusity. “To be a freshman, in the PAC championship game, and to record the sheer number of shutouts she has is remarkable.”

For the runner-up Tribe, a 17-3 record is good enough for the No. 4 spot in District 1-3A. Despite Thursday night’s defeat, Upper Perk is likely to host at least one game when Districts begin next week.

The Tribe came in determined to avenge an uncharacteristic 5-0 defeat at the hands of OJR back on September 30, but the Wildcats proved too strong.

“We’re not looking for moral victories at this point,” clarified Upper Perkiomen coach Mike Freed. “But we did generate more opportunities today. They (OJR) are just a really strong team. We’re still learning how to play in this type of environment.

“I’m struggling to say we’re going to see too many teams who are going to be on their level.”

That’s music to the ears of the victorious Wildcats, whose goals for the postseason are anything but modest as they currently stand as the No. 2 seed in the District 1-4A tournament.

“State champs,” Weaver said, when asked for specifics. “That is the only goal.”

Margusity’s been coaching long enough to know just how realistic such goals are. “If things fall right for us?” he asked rhetorically. “I think we have the potential.”

“It’s just an amazing feeling,” Weaver concluded. “It’s my senior year, and to go into the record books together as one team. These girls are like my family, and I love every time we get to take the field.”