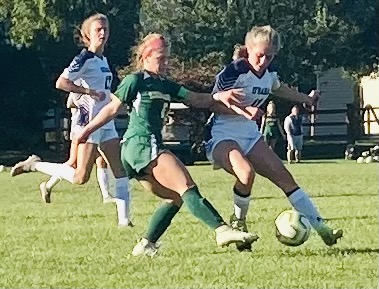 LANSDALE >> With a little bit of “attitude” and with Olivia Boccella’s saving grace, the Lansdale Catholic girls soccer team survived 80 minutes of regulation, two 15-minute overtimes and had enough left to prevail 4-3 in penalty kicks over Cardinal O’Hara Thursday in the Philadelphia Catholic League Quarterfinals.

“We’ve been waiting for this all season,” said Boccella. “All we wanted to do was get to the PCL Championship. And we’re finally on our way. Onto the semis and it feels great.”

After a 0-0 tie at the end of 110 minutes of soccer, Boccella made the key save the Crusaders needed to edge the Lions by one in PK’s. Lansdale Catholic’s Olivia Boccella made a key save in PK’s to help the Crusaders to the win over Cardinal O’Hara on Thursday, Oct. 21, 2021. (Kev Hunter/MediaNews Group)

The win advances the Crusaders to Tuesday’s semifinals against Archbishop Wood, at Ramp (right near Father Judge) at either 5 or 7 p.m.

“We knew they are a very good team and the last time we played them, it was probably one of our worst games. So we were disappointed in the way we played them the first time. But we knew we didn’t give them a fair fight. So we were excited to come back here and give them the kind of game we knew we could and we did,” said O’Hara senior Ellie Miller. “Although it didn’t swing our way, I thought we really put everything we had out there and hustled to the very last minute.”

After Delaney King, Nicole Mezzatesta and Ava Mercier buried their PK’s for LC, and Miller and Anastasia Ciminera connected for O’Hara, Boccella’s lunging save to her right stopped the shot by Maeghan McLain, leaving the margin at 3-2.

After LC’s Bella Wack hit the crossbar, Lauren Moore knocked one in for the Lions to even things at three apiece. Mia Norbury knocked it into the right side to put LC up 4-3, and then Kirsten Seeger pushed her shot wide left, and the rest of the LC squad rushed onto the field in celebration. The Crusaders came close multiple times in regulation and OT, making the sudden victory in penalty kicks that much more exhilarating.

“That’s kind of been the story of our season: We hit the post. We hit the crossbar. We hit the goalie. We hit everything but the net, which is a little bit frustrating as their coach, but they find a way,” Crusaders coach Bree Benedict said. “Mia stepped up. She’s not usually in the (PK) lineup but we looked at her and were like, she’s gonna do it. So we put her out. She probably has the most attitude on the team. She’s pretty underrated. She’s only a sophomore and she’s an incredible athlete. Her twin sister, Kate, is our outside left back. The two of them together are incredible athletes.”

Cassidy Saulino was the goalie during regulation and the two OT’s, keeping the game scoreless, and then Boccella, who plays center mid and center back, protected the net for PK’s.

“We’ve been doing it all year,” Benedict said. “We’ve had so many PK’s called against us because we are the most hand-balled team in the world. Every single time, we had Liv go in and we had the whole jersey exchange and everything, and she’s come up unlucky on every single one. But she guessed the right way (tonight). We figured if we give her five, she’s bound to come up with one. She just stepped up. She’s an incredible kid.

“This year is (Cassidy’s) first time playing soccer. She’s a pretty good basketball player and she came out to be our manager. We saw her catching the ball, and we put her in goalie because we didn’t have a set goalie coming into the season. She’s been incredible. She dove for the first time against Gwynedd (Mercy) last week and made a big save in overtime. She’s really come along.” Lauren Edwards has provided senior leadership for LC this season, including Thursday’s win over Cardinal O’Hara in the PCL Quarters on Oct. 21, 2021. (Kev Hunter/MediaNews Group)

At the other end, Ava Hneleski did a tremendous job in net for O’Hara, even stopping LC’s Megan Steinbach on a PK in overtime.

“She’s been good the last few games,” Lions coach Dave Cornish said. “She kept us in the game against St. Hubert’s on Monday, which got us into the playoffs. And we built off that and I thought we played really well tonight.”

The two squads pushed each other to the limit.

Said Lauren Edwards, LC’s lone senior, of her team: “They’re the strongest girls I know. I love them to death. I’m just so happy we were able to keep this going.

“This is a young team. Not all of them have gotten to experience that PCL title that I got to get my freshman year, so I just wanna keep them going and show them all the good that can come from playing together.”