Archbishop Wood pulls away in 2nd half, shuts out Archbishop Carroll 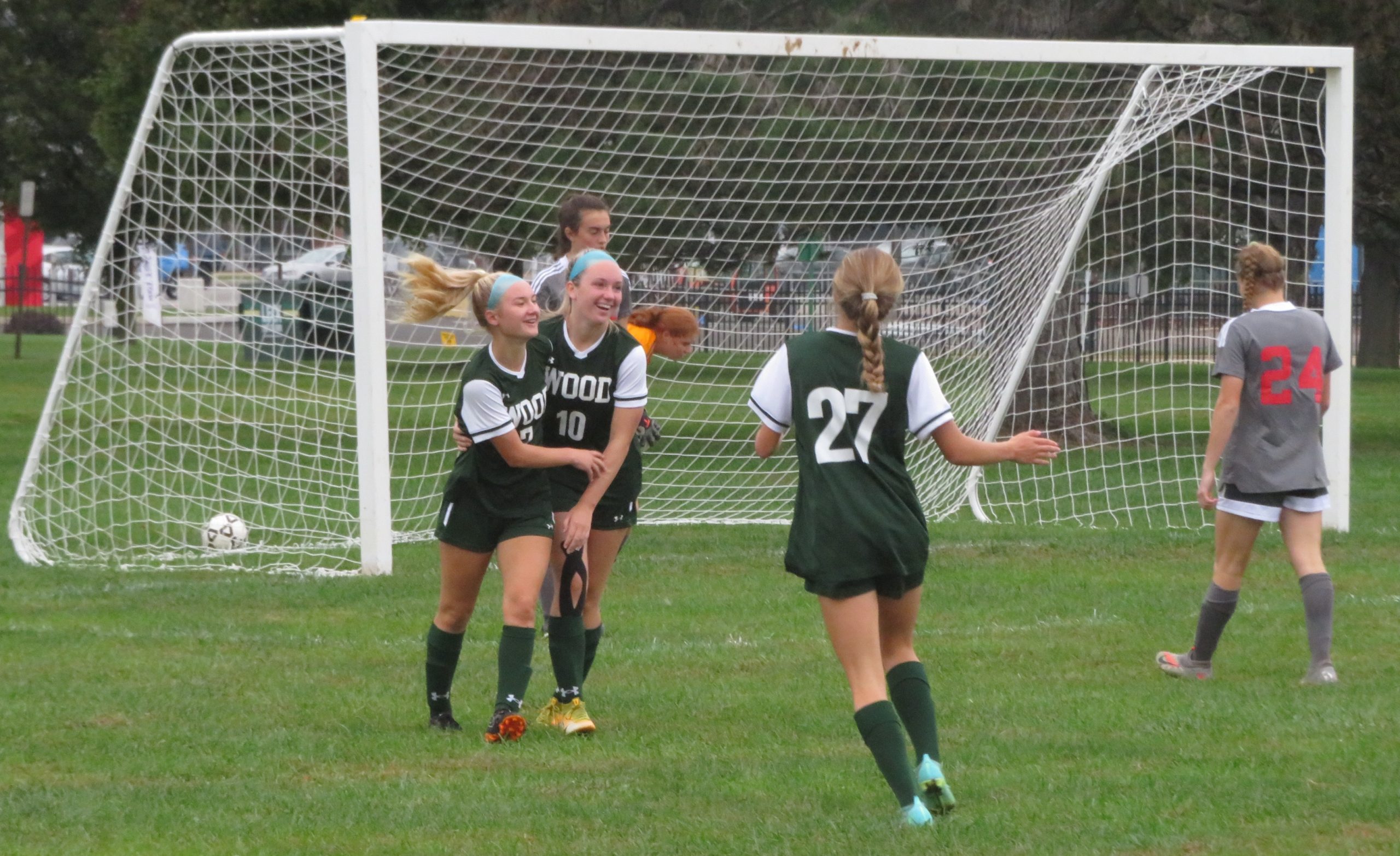 WARMINSTER >> Distance is not going to discourage Ava DeGeorge.

“If I see the net I just try to shoot,” she said. “Cause just try to create an opportunity.”

The Archbishop Wood girls soccer sophomore decided to take a chance on sending balls at the goal from above the 18-yard box in the second half Tuesday afternoon and found success twice.

One long-range effort sailed in while another was denied only for Grace Hoeger to put in the rebound, the final tally in a solid 40 minutes after halftime for the Vikings as they pulled away from visiting Archbishop Carroll and earned a 5-0 Philadelphia Catholic League victory.

“I feel like the second half we just connected better, found each other better,” DeGeorge said. “I think the first half we were maybe trying to find our forwards a little too much and we weren’t really connecting in the middle and I think in the second half we did that well.”

Wood (7-2-1, 4-0-1 PCL) had five different players find the back of the net as it won its third straight and stayed unbeaten in its last seven.

Madison Kennedy gave the hosts the lead early in the first half while Megan Hickey’s goal gave the Vikings a 2-0 edge at the break. Alyssa DeGeorge tallied the third before Ava DeGeorge’s shots from outside the box helped cap the scoring.

“The biggest thing we’ve been talking about is trying to play a full 80 minutes, right, and I thought, again, I thought in the first half we were lucky to go up early,” Archbishop Wood coach Tom DeGeorge said. “I thought the first half we could have been a little cleaner, maybe had a couple more chances but the second half I really was happy with.

“I thought we created a lot of chances, we were clean on the ball, we had the ball. So I was happy with the second half.”

GIRLS #SOCCER: 1H @woodgsoccer 2, Archbishop Carroll 0. Megan Hickey doubles the Vikings’ lead by getting into the box, cutting back and putting a left-footed shot into the far left corner. @Wood_Vikings pic.twitter.com/rEWMdYxV04

Ava DeGeorge is in her first season at Wood, transferring after her freshman year at William Tennent to join her sister Alyssa, a senior, and her father Tom in the Vikings’ bid for their first Catholic League title since 2016.

“But I think they play really well off each other too, not only being sisters but they kind of, you can see they find each other often.”

Archbishop Wood dropped back-to-back nonleague games to Episcopal Academy and Springside Chestnut Hill to start the season but since then the only time the Vikings did not come away with a win was a 1-1 tie with Archbishop Ryan Sept. 25.

“We’ve been pretty good I think,” Alyssa DeGeorge said. “Sometimes we can’t find the back of the net but I think eventually we do find it which is good.”

After consecutive 2-1 victories over Penn Charter and Hatboro-Horsham, Tuesday was a return to league play for the Vikings, who stayed even with Ryan with no defeats in PCL competition. The Ragdolls have played one more game to sit in first at 16 points with Wood just behind at 13 points.

“You know how it goes, everybody says ‘Oh you’re getting results,’ but at the same time you want to make sure you’re playing your best soccer as it comes to playoff time,” Tom DeGeorge said. “So I still think we have room to improve but I think we’re getting there.”

For Archbishop Carroll (4-5-2, 3-2-1), the loss Tuesday snapped a three-game unbeaten streak, the Patriots having shut out Conwell-Egan and Upper Perkiomen before a 2-2 draw with Dock Mennonite last Saturday.

Wood grabbed a quick 1-0 lead on the Patriots when Kennedy scored in front of the goal after a cross into the box by Meghan Matthew from the right side.

“That feels good when you do it,” said Alyssa DeGeorge of the early strike. “Sometimes we just have to find the rhythm of the game and then find the back of the net later.”

Hickey doubled the lead by getting to the ball in the Carroll half then driving into the right side of the box. After cutting back to get past a defender, Hickey placed a left-footed shot into the far left corner.

“Megan is a handful this year,” Tom DeGeorge said. “Megan’s scoring some big goals. A lot of teams are having a hard time defending her.”

Hickey had the assist as Alyssa DeGeorge put Wood up 3-0 after halftime, driving to goal then ripping a shot over the keeper at the near left post.

“Megan played a good header through and I scored off it,” Alyssa DeGeorge said. Archbishop Wood’s Meghan Matthews (25) keeps her eye on the ball during the Vikings’ game against Archbishop Wood on Tuesday, Oct. 5, 2021. (Mike Cabrey/MediaNews Group)

Ava DeGeorge made it 4-0 lofting a shot in from above the 18-yard box. Another long try by the sophomore was knocked down by the keeper but Hoeger pounced on the rebound to put in the Vikings’ fifth and final goal.

“I realized it wasn’t the best hit and then thank God Grace was there,” Ava DeGeorge said. “So it’s good.”