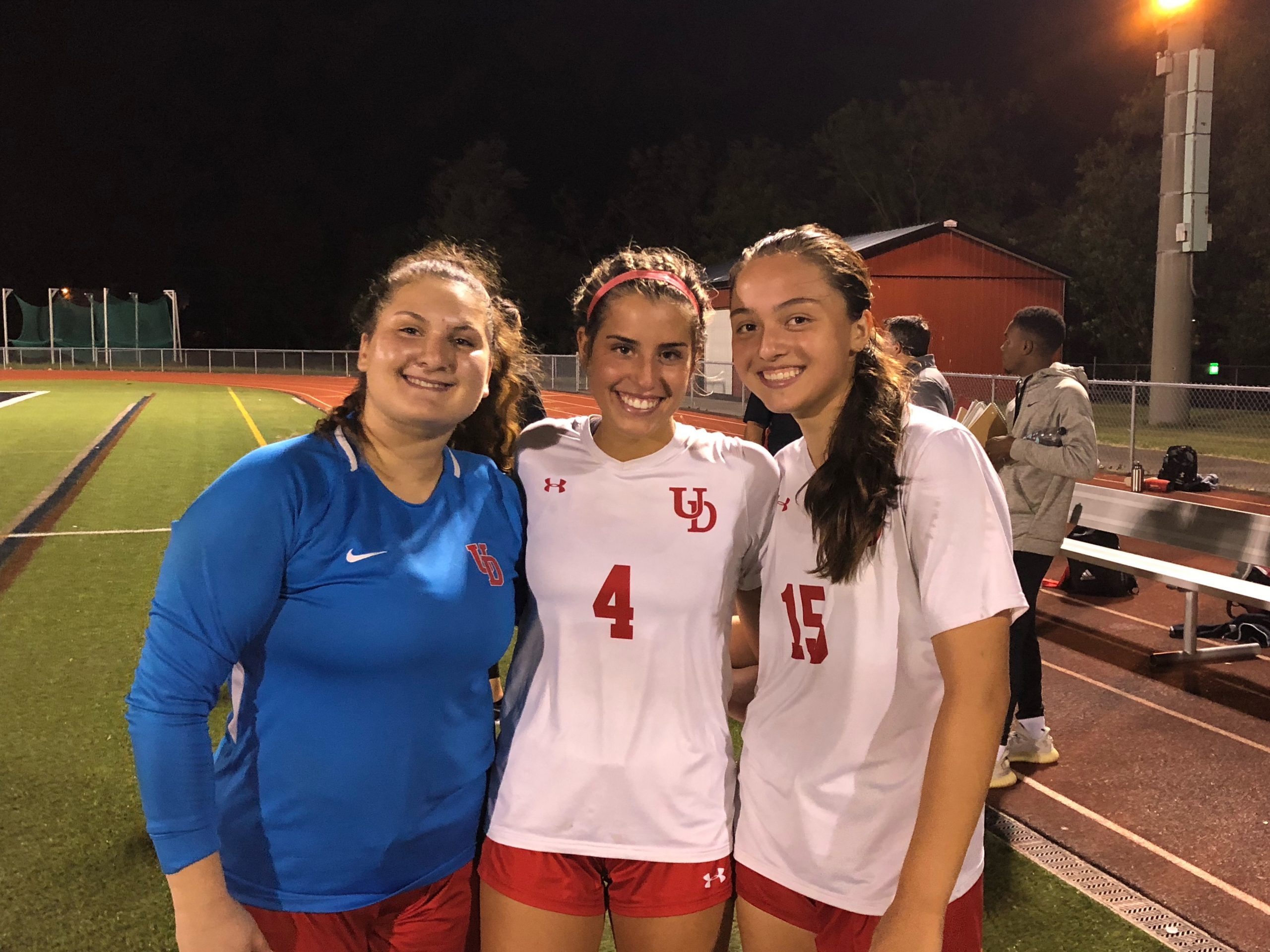 Upper Dublin's Rachel Adelman (1), Bliss Brenner (4), Alex Devers (15) have endured an all-road game start to the season, but the Cardinals are starting to find their stride. (Andrew Robinson/For MediaNews Group)

HORSHAM >> Trying to make amends for a 2020 season that didn’t meet anyone’s expectations, the Upper Dublin girls soccer team was handed another unexpected challenge on the doorstep of the 2021 campaign.

The wrath of Hurricane Ida, including a tornado that touched down in Maple Glen, devastated parts of the township that included the high school and surrounding athletic fields, casting all of UD’s teams out on the road to start their respective seasons. Instead of splintering, the Cardinals decided they were going to get stronger from it and with a stingy defense setting the pace, have started to find their stride.

Behind a wonder strike from Alex Devers and the ever-present defending, Upper Dublin got a needed lift by picking up a hard-earned 1-0 win at Hatboro-Horsham under the lights Wednesday.

“At the start of the season, it was hard because not only were we still trying to put all the pieces together, but all of that happened on top of it,” senior defender Bliss Brenner said. “This win shows we’re going in the right direction and we’re only going to get better from here.”

Upper Dublin (2-1-3, 2-1-2 SOL Liberty) had its season-opener moved from a home game to Methacton and since then, have played six straight road games with the last five all coming as night starts. Their defense, which features seniors Brenner and Maddie Amoia on the flanks, junior Emeline Bell and freshman Erin Seabrook at center back, Alaina Sanders at defensive mid and senior Rachel Adelman in goal, has allowed just two goals on the season.

Adelman, a four-year starter in goal, battled a nagging injury last year but has come up big for her side this fall and did so again Wednesday. She had two huge saves in the first half, palming a rocket of a free kick by Hatters (2-2-1, 2-2-1 SOL Liberty) standout midfielder Emma Levin over the bar with eight minutes left and covering a tight-angled shot at the near post by Caroline Shegogue just before the horn.

Good defending in soccer is a group effort and Adelman cited that as the key to the group’s stingy start.

“We finally just clicked,” Adelman said. “Between our communication and our starting center backs, they’ve just been unbelievable and they and I just work together like clockwork.”

Scoring goals has been a struggle for both teams this fall and they both came into the match off 1-1 draws on Monday. The Hatters have a valid reason at the moment, as senior co-captain and three time first team All-SOL forward Emily Thomas is sidelined with an injury but hopes to be back no later than next week.

That didn’t stop the hosts from putting forth a good effort on Wednesday as they geared to contend with Upper Dublin’s versatile attacking threats. Levin, a sophomore co-captain who has taken on some of the responsibility offensively, created some good chances with her set pieces while senior co-captain defensive mid Sophia Liott battled hard in the middle winning numerous 50/50 balls and had a good scoring chance, ringing the post midway through the first half.

“We’ve been struggling to find the back of the net, Emily is our senior captain and our goal-scorer, so I think we got a little deflated from that,” Hatters coach Kelsey Daley said. “Emma Levin has stepped up in so many ways, she’s a tremendous player but she can’t do it all. I thought we played well, we really struggled against Abington but since then we’ve been bouncing back well, just struggling to score.”

UD coach Chuck Gesing knew his team would start to score eventually and the Cardinals couldn’t have asked for a much better strike to be the game-winner on Wednesday. Lili Kleiman created problems with her speed in the first half and Regan Rubin was able to take on and beat defenders with Olivia Hoffman, Ava Costanzo and Berkley Harmon all making good runs.

Midway through the second half, it fell to Alex Devers to break the deadlock. The junior, who started at forward, played some attacking mid and finished in a holding role, had the ball and a little space to use. With one touch, she unleashed a gorgeous curling strike from about 25 yards out that ducked under the bar and in.

“Every game, we’ve gotten better in the attack and we’re all starting to combine more and build that chemistry we’re finally understanding,” Devers said. “When it’s late in the game, everyone wants to score and I can’t take credit for winning this game. It was a team effort from Rachel all the way up to our forwards.

“It’s relief and it always feels good to score and celebrate with the team, so I think it’s definitely a step in the right direction.”

After scoring, UD went to total defense mode, although Rubin nearly made it 2-0 when she rattled the underside of the crossbar on a distance shot. Gesing thought his team was showing some tired legs at points in the match, but was extremely happy with the way the Cardinals closed things out and how they’ve handled this trying season.

Upper Dublin went just 1-8-1 in 2020, but even with a storm nobody saw coming forcing them from their nest for a while, they’re building for much more this fall.

“The difference between the senior class from when they were juniors to seniors is huge,” Gesing said. “We’re getting contributions from all over the field we weren’t getting last year. They’ve stepped up so much, the juniors are following along and everyone is coming along with us.”

Both sides now enter the crossover phase of the SOL schedule, where they will face the SOL Freedom’s teams starting Friday before hitting the second set of Liberty fixtures. Daley hoped seeing teams that aren’t as used to playing the Hatters will help get the offense going again but stressed they can’t afford to overlook anyone either.

Upper Dublin students are slated to finally be back in the high school on Monday and the players were hoping some home games would soon follow. Until then, they plan to keep taking on every test in front of them they way they have every other, all together, as a team.

“It brought us together,” Brenner said. “We already had the same goal of playing together and doing our best, so with all the challenges we faced, instead of pointing fingers or feeling sorry for ourselves, we took it to be stronger, come together and be a better team.”