Lansdale Catholic dominates second half in win over Souderton 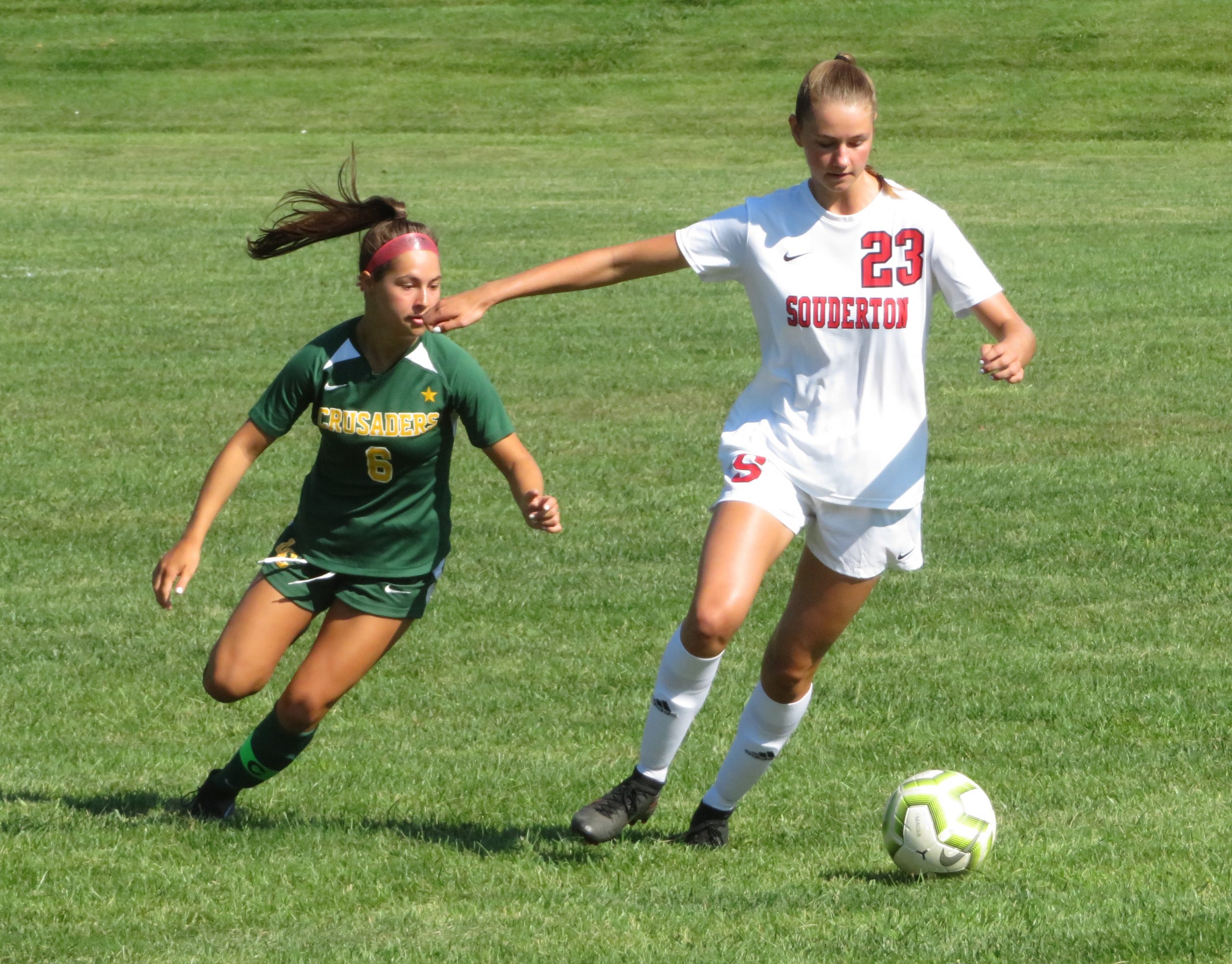 “We just talked about we only have 15 girls and we’re here to play together and play for God because we’re a Catholic school and win together,” LC captain Nicole Mezzatesta said of the halftime message. “We just wanted to show who we are and come out strong.

“We communicated and dropped back on D. We worked together to play through the back and we got a couple through-balls through to score. That’s how we went up.”

A pair of fortunate bounces sandwiched around a beautiful play helped the Crusaders (2-0) score three straight goals and take a 5-2 lead early in the second half.

Bella Wack scored the go-ahead goal from midfield. Her kick from just inside the offensive half of the field bounced inside the box, over the Souderton keeper’s head and into the net to break a 2-2 tie.

Mezzatesta quickly added another goal to double the lead to 4-2. Emily Simpson sent a pass up the middle of the field and Mezzatesta perfectly timed her run to stay onsides. She finished her breakaway with a score to the right side of the goal.

“It bounced off of me and went to Em,” Mezzatesta said. “Em played a through-ball and I just dribbled until the goalie came out and placed it in the corner.”

Simpson made it 5-2 when she crashed the net during a Delaney King shot. King’s strike hit the post and bounced in front of the net, where Simpson gathered the ball and buried it for a comfortable three-goal lead.

Lansdale Catholic got on the board first when Megan Steinbach took advantage of a miscommunication between Souderton defenders. When neither of Big Red’s players went for the ball, Steinbach gained possession, turned and put the ball just under the crossbar for a 1-0 lead.

“I think overall mentality and approach was where we shot ourselves in the foot,” Souderton coach Ian Smith said. “Early on we went down a goal. After that it felt like we were chasing and we had moments when we were sharp and we had moments when we were running around like chickens with our heads cut off. Sometimes that’s to be expected in the first game of the season. At least we know we have stuff to work on.”

The Indians (0-1) responded with the next two goals. Alivia Beresovoy tied the game at one and Avery Nogami put Souderton ahead.

“I just saw a through-ball and I went with it,” she explained. “I placed it in the corner so the goalie couldn’t dive and get it.”

Nogami scored her second goal of the game in the second half to get Souderton within two, 5-3. Kaitlyn DeCandilo sent a corner kick into the box and Nogami put it directly into the back of the net.

“Senior captain, huge piece,” Smith said of Nogami’s role on the team. “Last year I joked she’s probably the most fouled player in Suburban One. She just throws herself at everything and she gets a lot of goals like that, too. That’s how she got the goal on the corner kick. When she steps foot on the field she gives 110% every time and that’s all you can ask as a coach. We’ll work on getting that mentality collectively as a team and we’ll build from there.”

King finished off the scoring with a goal to extend LC’s advantage back to three, 6-3.