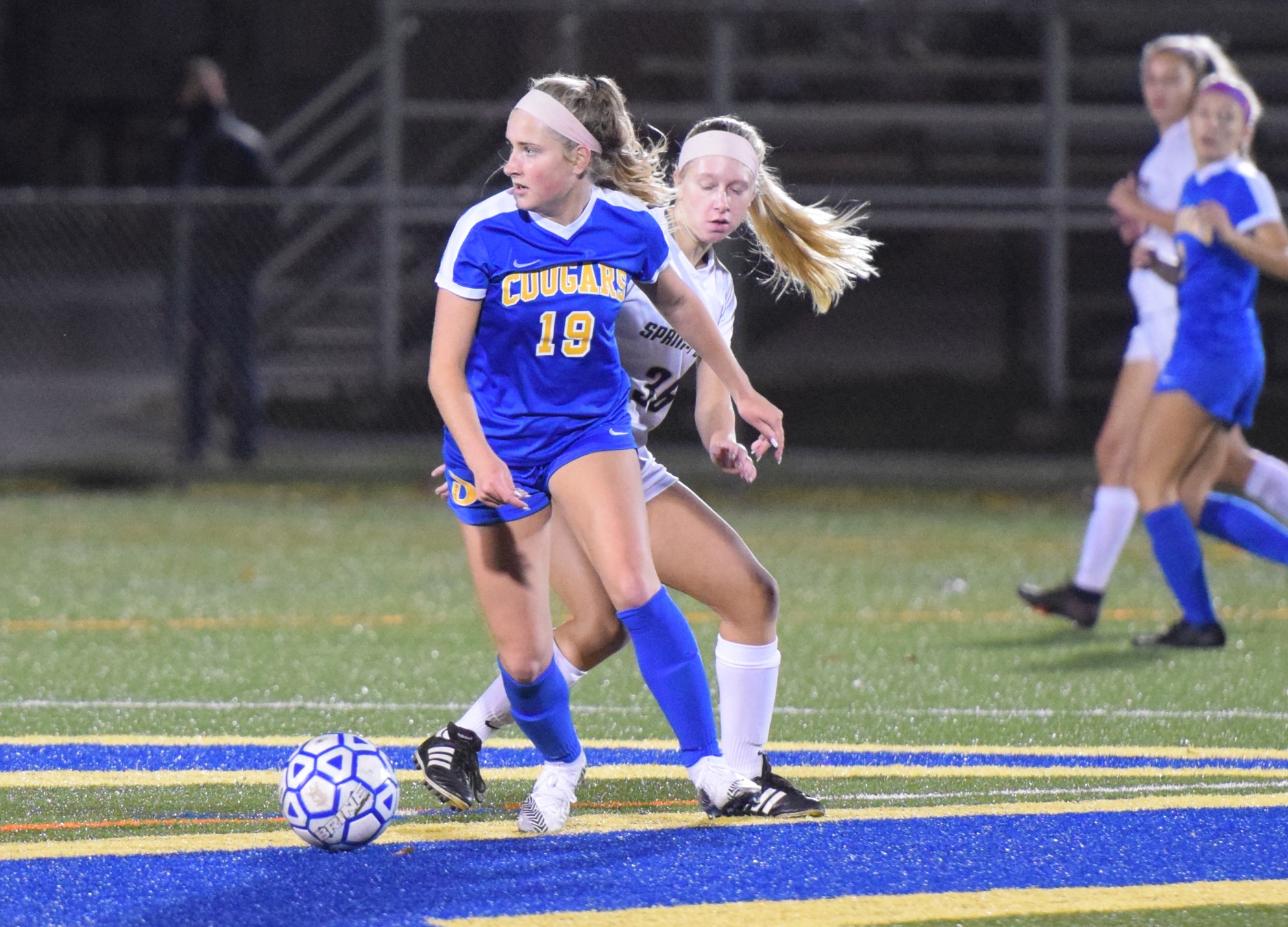 A University of Pittsburgh recruit, Darlington scored nine goals and chipped in seven assists in just seven outings. She is a multi-year all-league selection. “Sara is one of most dangerous forwards in our league and is the only player I’ve seen in a while that was marked by two defensive players in most games,” said her coach Joe Ratasiewicz.

The leading scorer for the Patriots, Peterson is a first-team all-league pick. “Maggie is very fast and skilled with the ball at her feet,” said Great Valley head coach Jennifer Michewicz. Peterson is a former academy player at Penn Fusion and was a big addition this fall for the Pats.

A four-year starter, Wilson was once again an All-League pick. She scored four goals and dished out five assists in 2020. Unionville amassed a 40-4 overall record during her tenure. A forward, Wilson has committed to play collegiately at Franklin & Marshall. “Alex is the type of player that most coaches would want on their team,” said her coach Joe Ratasiewicz.

An emerging star, Wolfe collected 11 goals (and four assists) in just 10 games in 2020. She was named an AACA All-Star and was the Hurricane’s offensive MVP. “Kaelyn is the complete package,” said her coach Gary Christopher. “Her pace with and without the ball is already elite. She is as technical of a player as any player in our area.”

Minnier scored at least one goal in every game during the 2020 campaign. She is creative in the midfield as well as the offensive third of the field. “She was the single most dominant player in our league this year against us,” said Avon Grove coach Joe Herman. Her coach, Katelyn Phillips says she could be one of the best to ever play at West.

An attacking center midfielder, Reimold notched three goals and added four assists for the Cougars, who won the Ches-Mont crown and went 10-1 overall. “Lauren is physically tough and tactically astute,” said her coach Jason Luzak. “She is capable of quality first touches and making good decisions on the ball.”

A first-team All-Ches-Mont midfielder, Wilson has been a starter every season since 2017. This fall she scored three goals and notched six assists in seven outings. “Hayden never complains and can play any position and always has a positive attitude,” Unionville head coach Joe Ratasiewicz said. “Like her twin sister she’s been a true standout from freshman to senior year.” She is also headed to Franklin & Marshall.

An attacking midfielder, Pelkowski had seven points (five goals, two assists) in just nine outings for the Golden Knights. A first-team All-Ches-Mont American Division pick, she was a team captain and has committed to play collegiately at Virginia Tech. “Emma brought intensity and leadership on and off the field,” said Rustin coach Ashley Ainsworth. “Her incredible field vision and unmatched technical abilities placed her as our strongest player.”

Amassed seven goals and five assists in a shortened season, and a highlight was Hatt’s game-winning goal against Kennett. “Lauren is an incredibly smart and improvisational player,” said her coach Patrick Kinzeler. “She dominated her position in every game. Her balanced approach of intensity on the field and teaching off the field was pivotal in the development of our young program.”

It was a shortened season, but the Red Devils gave up just two regular season goals, and a lot of the credit goes to MacDonald. The defensive midfielder organized and anchored the Avon Grove backline, and the Devils went 6-1-1 to finish in second place in the Ches-Mont. “She was often tasked with defending the opposing team’s top playmaker and then starting the attack once we won the ball,” said her coach Joe Herman. “She also added a goal and an assist. They don’t make them any tougher than Maddie Mac.”

A Division I college prospect, Maxson was the Vikings ‘rock’ on defense. “She was the main reason why our team kept the score so close to teams that were (on paper) much stronger,” said her coach Shannon Mueller. “She has speed, vision, and excellent awareness on all aspects of the game.” Maxson played for the Developmental Academy on Penn Fusion Soccer Academy for three years.

Anchored a defense that allowed just five goals all season, including seven shutouts for the Ches-Mont champs. Riley was a captain and one of two seniors who attended all optional training sessions throughout the summer months. “Bridget is dominant in the air and a leader on and off the field,” said East coach Jason Luzak. Riley chipped in an assist in 2020.

Was the top defender on a defense that registered six shutouts and allowed just eight goals in 12 games this fall. Henderson is a first-team All-Central League selection. “She has been a starter in our backline since she was a freshman.” In that span, ’Stoga won three league titles and a district crown, and made three PIAA Tournament appearances.

An up-and-coming standout in goal, Stark averaged nearly five saves per match and recorded three clean sheets during an abridged season. Despite the Warriors’ 3-4 record, Stark surrendered 10 total goals, including just four in the final five outings. She was a first-team All-Ches-Mont National pick.

DLN ALL-AREA: Conestoga’s Klebe waits her turn, then makes most of it in amazing junior campaign
How to report scores to the Daily Times