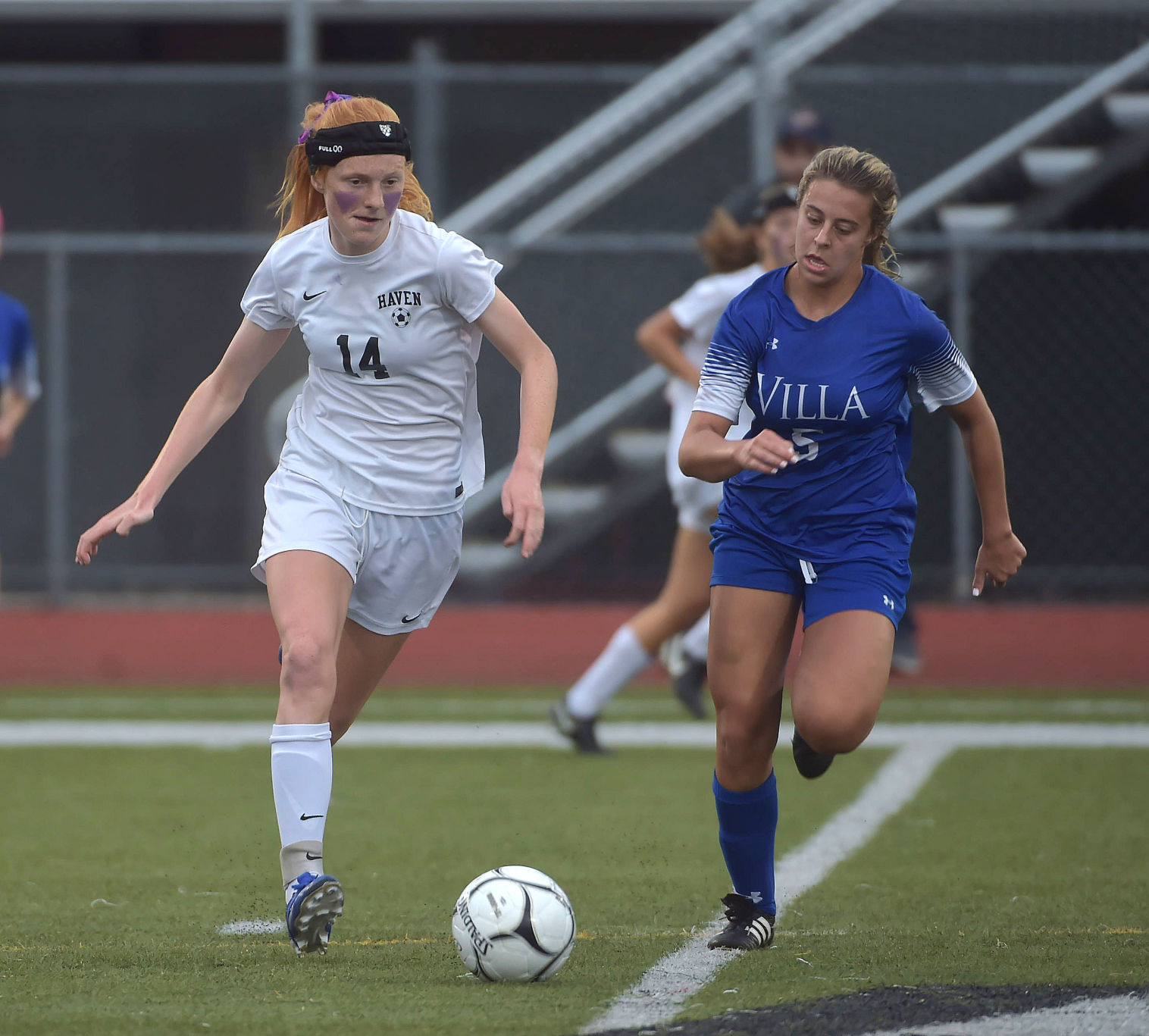 Strath Haven's Maggie Forbes, right, defended by Villa Joseph Marie's Emily Borell during the 2019 District 1 Class 3A final, made the most of an abbreviated senior season, scoring seven goals and six assists to be voted by Central League coaches as the co-MVP. (Pete Bannan/MediaNews Group)

With plenty of time to think over a pandemic summer, Maggie Forbes kept returning to one thought.

What if, without knowing it, the 2019 Daily Times Girls Soccer Player of the Year had played her final game of soccer?

When Forbes walked off the field at Ramp Playground in November 2019, Strath Haven having lost to Archbishop Ryan in its first trip to the PIAA tournament since 2012, SARS-CoV-2 was nothing more than a peculiar virus infecting unstudied mammals in some remote forest. Forbes wasn’t yet sure what college would hold, though she likely had an inkling that she was destined to follow in the footsteps of two older sisters running track at Rice University. But she never would’ve suspected that she had played her final game as a Strath Haven soccer player.

Months later, that fear grew profound, to the point of certainty. So whatever Forbes would take from the season ripped from the jaws of cancellation would be an unqualified positive.

“It was the thing that kept me going, and I know all my teammates were happy to have a season,” Forbes said. “For us seniors, we got a way to finalize the past three years, past four years of our high school experience. … Being able to have the chance to play one more time was just amazing.”

The Panthers didn’t have the season they expected, a 3-4-2 record and the seventh seed in the Central League for a team ravaged by injuries. But Forbes’ production didn’t dim. Even as she shuttled all over the field to fill needs in Haven’s injury whack-a-mole, in central midfield and at forward, she remained the usually potent threat that earned Player of the Year recognition last year. With seven goals and six assists, Forbes was voted All-Central co-player of the year by coaches, sharing the honor with Maya Masotti of league champion Lower Merion.

For all the waiting, the feared postponement, the back and forth, Forbes found the positives of quickly adapting to a shortened preseason and league-only season with her usual upbeat personality.

“It was an interesting start, getting out there as a team, but we figured it out,” she said. “It was a learning experience, but I definitely think it’ll help the future teams. I think it was fun to have a curveball and learn to adapt quickly to things.”

One wrinkle, in a nod to her future, was Forbes’ double duty: In addition to soccer, Forbes also led the Haven cross country team. She finished fourth at the Central League championships, highest among the Panthers, in 20 minutes, 49.5 seconds, en route to the team title.

Forbes will compete on the track next year at Rice, where older sisters Maddie and Grace have carved successful careers.

“It was an extra thing,” Forbes said. “It kept me going. It was pretty busy sometimes, but I wouldn’t change it. It was a fun experience to run for times and help with my college experience, but also I wouldn’t ever give up my high school soccer season for the world. That’s the most important thing for me. I was very, very excited to be able to do both.”

Lower Merion fulfilled the promise of its talented senior class by winning a Central League title several years in the making. Masotti led the way, with 12 goals and four assists in 12 games. A midfielder by trade, the UMass commit did a little of everything in the attack, and her MVP award culminates three All-Central accolades.

At the other end of the field was Andrey Brown, the University of Cincinnati-bound goalie who allowed just 0.37 goals per game, keeping clean sheets in seven of 12 outings. A superlative shot-stopper, the two-time All-Central goalie is a vocal leader and contributed dangerous set-piece delivery.

Despite the attention garnered by Masotti and Brown, sophomore midfielder Elly Slensky provided arguably the biggest moment of the season, a sublime volley in overtime of the Central League semifinal against Garnet Valley. Slensky tallied three goals and three assists on the season. She’s one of only two underclassmen on the first team.

Slensky’s goal ended the career of Garnet Valley’s Carlie Shiller, a four-year starter and All-Delco last fall. She was the team’s leading scorer each of the last three seasons after starting as a defensive central midfielder her freshman year. She had 22 goals and 10 assists for the Jags, including seven goals and three assists this season. The captain stepped up in big moments, like providing the game-tying goal with 30 seconds left against Conestoga.

Shiller will continue her career at Ursinus. The Jaguars won the league’s sportsmanship award.

Shiller was joined on the All-Delco team last fall by Haverford defender Brooke Snopkowski, who added a second straight All-Central honor. From a sophomore outside back on the Fords team that went deep in districts, Snopkowski has grown into a commanding center back. In 48 games with Snopkowski the last three years, according to coach Jeff Jackson, the Fords have kept 19 clean sheets and allowed 1.1 goals per game. Snopkowski also supplied three assists this season. She’ll play at Wilkes University.

Conestoga placed two on the All-Central first team. Junior forward Abby Klebe scored 12 goals to go with two assists in her first season on varsity. Senior defender Reese Henderson led a backline that allowed eight goals and kept six clean sheets, capping a career that started as a freshman contributor and through three league titles and two state tournament appearances. The Pioneers finished second in the league with a 6-1-2 mark before being upset by Radnor in the semifinals.

Sophia Hubbard was at the forefront of that effort for Radnor in central defense. She played nearly every minute, even as injuries befell those around her, providing steady leadership and stellar one-v-one defending for the league finalist.

Most of the league’s top defenders came from the Delco contingent. Ridley’s Katie Mason is a two-year captain and three-year starter. She provided two assists, led the team in minutes played (even through an injury) and marshaled a young unit with her leadership and one-v-one defending.

Noelle Lehrman had a similarly huge influence for Marple Newtown. Though they went 2-6-1, the Tigers beat Radnor and pushed Lower Merion, Haverford and Penncrest to overtime. Lehrman was a big reason, covering ground as the backline stopper and leading the Tigers in minutes.

Penncrest’s Kara Mullaney caps four years of contributions with an All-Central nod. The Lions’ top scorer as a sophomore and junior, adopted a more stay-at-home midfield role. Short on goals, Penncrest still rode its stability in the middle of the pitch to a 3-1-4 mark and the fourth seed in the playoffs.