Mercury All-Area: Curry embraces change in her journey, makes most of new opportunity with Spring-Ford 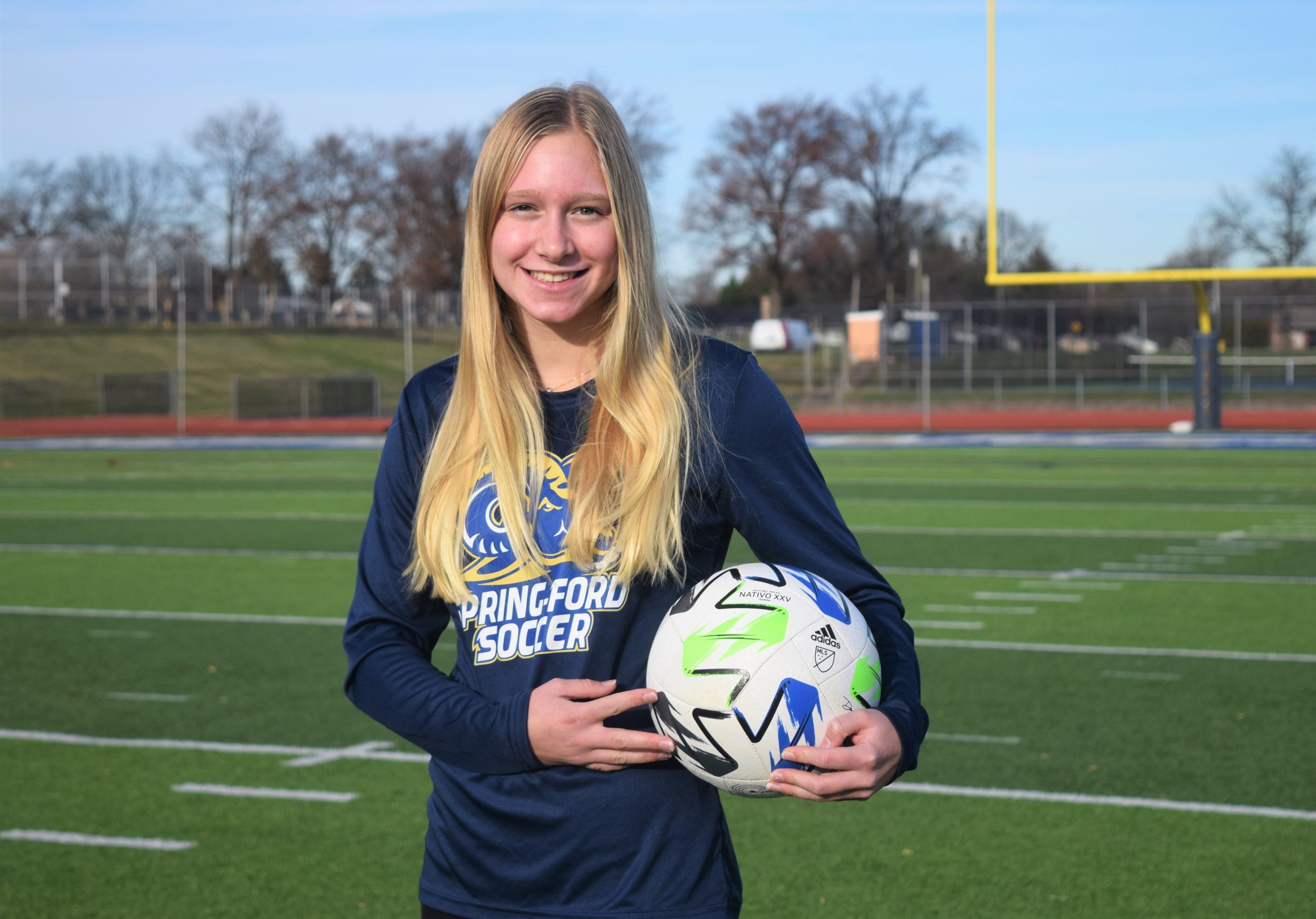 Liv Curry sat in the stands the previous two falls watching a Spring-Ford girls soccer team she wished she could be a part of.

It wasn’t for lack of ability. Her soccer journey was just on a different path.

As a Spring-Ford freshman and sophomore, the closest Curry came was watching older sister Ella and the Rams, finding a lot to love about the fan support, the lights, the atmosphere … things her soccer experience lacked.

Participation in the USSDA was the top playing opportunity for top male and female soccer players in the region and country. It also meant, with practices four days a week and games on the weekend, those student-athletes had to choose between the higher competition and recruitment opportunities of the DA versus the camaraderie and community of high school soccer.

DA play was right for Curry and her aspirations, but it wasn’t without conflict.

“I think I knew I was making the right choice based on the fact that I wasn’t committed, which was my main priority because I wanted to play soccer in college,” Curry said. “At that point I felt that it was the best place to stay. But coming to (Spring-Ford) games and seeing the amount of fans that were there – it’s a lot more rowdy and you get that feeling – I always thought that would be really cool.”

Curry’s academy decision was rewarded when she committed to Big Ten school Wisconsin in April 2019.

A year later, the decision was no longer hers to make.

A month into the pandemic shutdown, U.S. Soccer announced it would end the operation of the Development Academy, concluding a chapter in the careers of many top soccer players in the country, including Curry.

“It was sad because DA was like my whole life because we couldn’t do high school soccer. It was literally all year round,” said Curry, who still plays club with Penn Fusion’s ‘04 academy team. “But at the same time, now I can actually experience high school (soccer). (The feeling) wasn’t quite happy, but now I can have a new chapter where I have both high school and club at the same time.”

True to character, Curry took on her new opportunity – competing with the Spring-Ford girls soccer team for the first time – with a smile on her face.

The junior center back showed her quality from the moment she stepped on the field and helped the resurgent Rams concede only 10 goals in a 13-2-1 season that featured a share of the Pioneer Athletic Conference championship (with Owen J. Roberts) and a trip to the District 1 Class 4A championship game, the deepest district run for the program since 2017. In addition to selection to the Pa. Soccer Coaches Association All-State team, Curry is the Mercury All-Area Girls Soccer Player of the Year. Curry was one of three DA players joining Spring-Ford (alongside junior Reese Kershner and sophomore Mo O’Donnell) this fall and she was grateful at how quickly they were embraced by existing team members.

“I knew everyone, but at first I didn’t know how they were going to react because I hadn’t been there the past few years. But everyone was so welcoming,” Curry said.

“I feel like everyone was so close and we all had the same goals of wanting to get far in the season, which we did.”

Curry exhibits a lack of ego in personality and play, a trait reminiscent of older sister Ella, a 2020 Spring-Ford grad and two-time All-Area first team pick who moved on to play at the University of Massachusetts

“My dad (Chuck) played soccer in college and we’ve always looked up to him in that way,” Liv said. “We’ve always thought of it like there’s always some way to improve. No matter what happens, there’s some ways to improve.

“This is a team sport. It’s not about me, it’s about the team. With my teammates around me, I want to help them do better. You can’t win with one person, you have to win as a team.”

Curry isn’t the prototypical Division I center back: she’s not physically imposing, but makes up for it with superb one-on-one defensive ability, great closing speed, calm and craft on the ball and superior instincts.

She was a midfielder earlier in her career but quickly found she loved the stakes of being a defender.

“I love the feeling when I’m the last defender and I get to shut people down. When I’m in the back my mentality is that I can’t let anyone by me. If someone gets by me I feel like, now I have to get back and not let them shoot,” she said.

Also new to Spring-Ford this fall was first-year head coach Tim Raub. He’d heard of Curry’s ability but did not meet her until just before preseason.

He quickly found what others have: looks can deceive.

“When I heard ‘Division 1 center back going to Wisconsin’ I was expecting this 6-foot tall brick house. And she comes in and she’s this little back. How she’s going to play at Wisconsin? And then she stepped on the field and I said, ‘Oh, now I see,’” Raub said.

“She’s small for a center back, but she plays so big. She’s a good, fun loving kid and being around her you don’t get that she’s this hardline, get-at-it, constantly serious Division 1 kid. She’s a fun kid. And then she steps on the field and this light switch goes on and it’s time to get the business.”

With accomplished leaders in All-Area first team senior midfielders Hope Flanegin and Molly Thomas already in place, Curry didn’t have to be an instant leader. She could instead just focus on playing her role for the team.

“We had such great, knowledgeable captains that she was able to step in and play a role and not have to put the whole team on her shoulders,” Raub said. “We always gave her an individual responsibility going into games. Our goal to her every game was, ‘This is their forward, go demoralize her for 80 minutes.’ (With Curry stopping) the opposing forward the rest of the game will work itself out because we have enough talent to handle it.”

Spring-Ford’s season was defined by its rivalry with Owen J. Roberts. The teams split in the regular season and settled to share the PAC championship. They met for a decisive showdown in the District 1 quarterfinals. With Curry leading the defensive charge alongside back four mates Caitlin Norwood, Raven Wellington and O’Donnell and goalkeeper Riley Wallace, the Rams kept the Wildcats off the scoreboard for more than 100 minutes and won in double overtime 1-0.

“Our third OJR game, in districts, that was a really big booster for us,” Curry said. “That was our PAC championship basically. Beating them, it made everyone want to win even more, it was like, we beat them, we made it this far, now we have to continue.”

Clean sheets were the order of the day in the Rams’ run to the district final with three straight shutouts, including a 1-0 win over No. 1 seed Downingtown East.

The Rams’ run ended on the turf of eventual PIAA 4A champion Pennridge in a 2-0 defeat on Nov. 13. Though it didn’t reach the PIAA tournament like a traditional season due to the pandemic-altered champions-only postseason, Spring-Ford made the most of its season.

There’s only one thing Curry might change, but she’s found a silver lining.

“If it had been a year sooner that the DA stopped I could have played with my sister, but at least I got this year, and next year, too,” Curry said. “I can’t complain about that.”