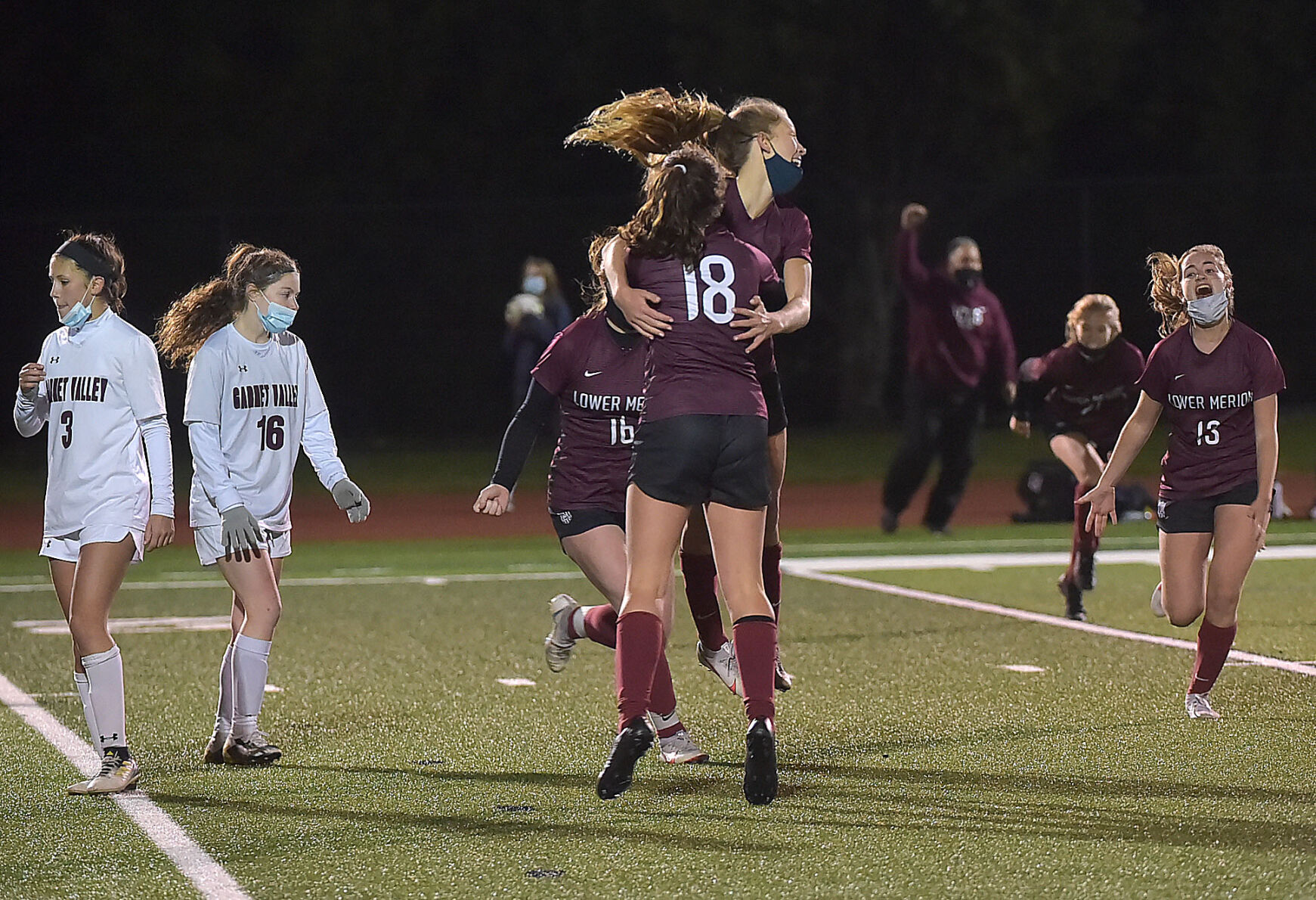 LOWER MERION — When a soccer game endures at nil-nil, even an entertaining one like what Garnet Valley and Lower Merion waged, it can seem a goal is never going to come.

As such a game hurtles into overtime, it can seem nothing will break the deadlock. Then in a flash, all that can change.

Elly Slensky provided the flash, her shot from outside the box lasering through the freezing night and sending top-seeded Lower Merion to the Central League tournament championship with a 1-0 overtime win over the Jaguars.

The final sequence was the last in a number of them in a balanced, taut affair. A throw-in, a wayward clearance, a knock-down by Grace Downey, then Slensky put her foot through the ball and through 82-plus minutes of scoreless soccer. “We had a nice play; Grace had a nice layoff,” Slensky said. “I just took a shot. But it all led up to that with our fight.”

The No. 1 Aces will host No. 3 Radnor, which upended second-seeded Conestoga in the other semifinal, Saturday.

The fifth-seeded Jags showed plenty of fight. The best chance came early, forward Alyssa Wert drawing out Lower Merion goalkeeper Audrey Brown with a teasing run in the 16th minute, Brown fouling her in the box. But when Wert stepped to the spot against the University of Cincinnati signee, she skied her PK way over the bar.

Despite the setback, it didn’t stop Wert from having an active game.

“Her stamina is insane,” Garnet outside back Sophie Latella said. “She’s never not trying, but especially when something like that happens, you have to bounce back.”

Brown was called into action for three saves. Latella tested her with a shot from outside the box that kept carrying in the sixth minute, Brown catching. Wert was played into space down the left channel in the 39th by Anna Goldkamp and could’ve done more with a low shot that Brown smothered. Goldkamp volleyed from 20 yards out in the 71st, but Brown was equal to the task as GV surged late.

More often, it was the front three for Lower Merion – Hannah Blodget, Maya Masotti and Downey – controlling play. But with Latella, center backs Mikayla Anderson and Lindsey Earley in the middle and a rotating cast at left back led by Bridget Stoops, the Jags performed admirably.

“We worked on that all season, so it wasn’t anything that we haven’t seen before,” Latella said. “But their pressure was really high and they were playing wide a lot, which was hard to defend. I think our shape made up for it a lot.” Eight saves from Kayleigh Saboja were needed to keep parity through 80 minutes, including six in the second half. She denied Ella Braunfeld on either side of halftime with diving saves, then punched a shot off the head of Blodget in the 76th, absorbing a hefty collision for her trouble.

“She is an absolute life-saver,” Latella said of Saboja. “She’s the best goalie I could ever ask for. She talks to us through the whole game, she knows how to keep us motivated all the time. Even in tough situations, she’s always the first person to run to us.”

It didn’t take long into overtime for the stalemate to be broken, seeming from nothing. Thursday’s was a rare game that left players on both sides in tears, though of a very different nature. Among the Aces, the hugs started before the extra session, the realization dawning that the next goal could spell the end of an unusual journey this fall and the careers of nine seniors.

Quietly, the sophomore Slensky resolved to make sure that goal would be hers.