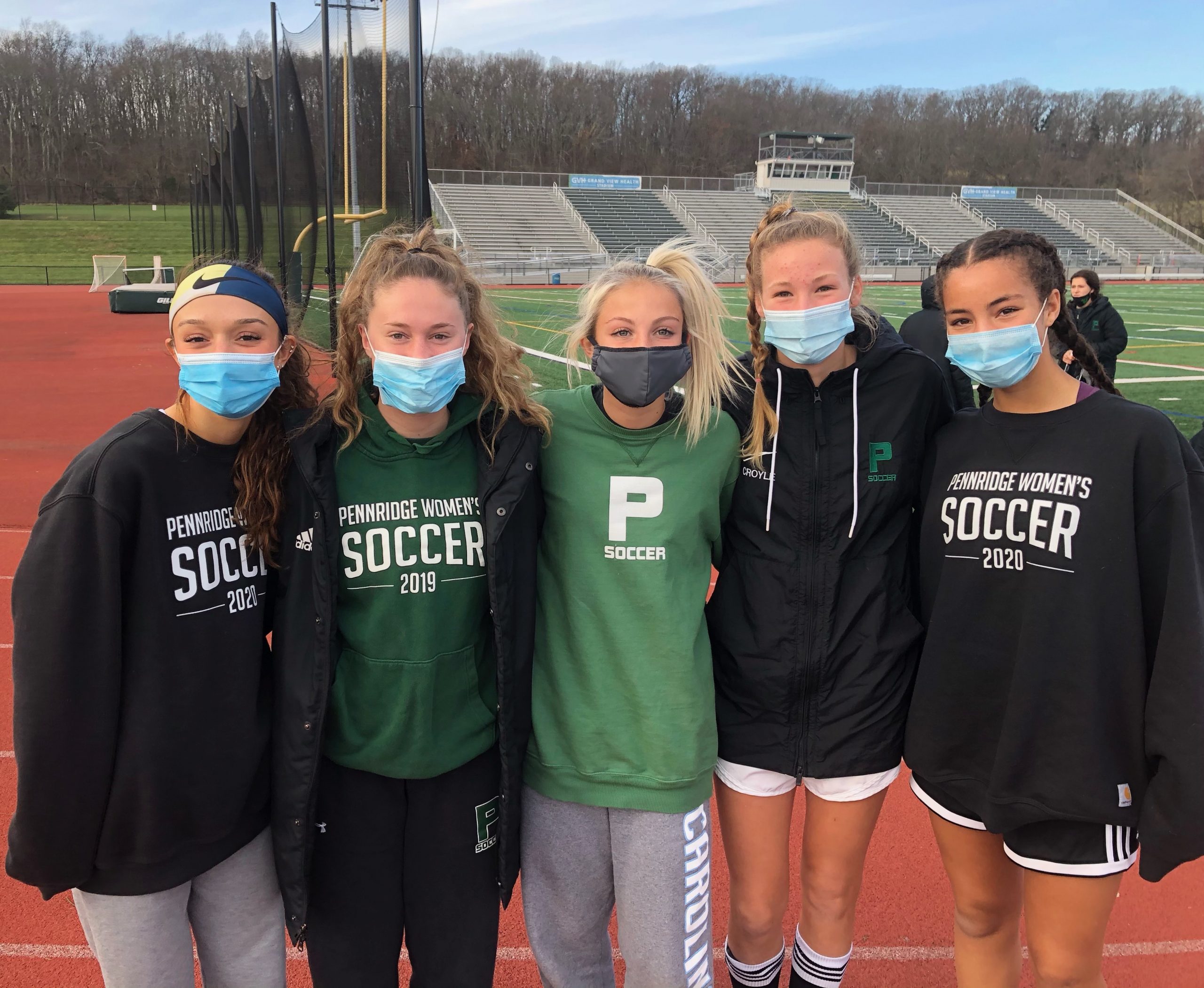 The construction of Pennridge’s defensive group falls right in line with the path of the Rams girls soccer team’s season.

Their goalkeeper, junior Sierra Shaeffer, was a field player four months ago. Seniors Cady McKean and Kera Dam are first-year fulltime starters while Anna Croyle and Casey Malone are freshmen. It may not make much sense on paper, but like so much else for Pennridge this fall, it’s just worked.

Coming off their sternest test of the season, the back five are ready to make their final stand on Saturday when they face North Allegheny for the PIAA 4A state title in a 4 p.m. start at HersheyPark Stadium.

“We’re all really close and we get along, which helps. We build each other up and don’t tear each other down,” Croyle, a center back, said. “It doesn’t matter how old, how big, how small, if you’re a first-year starter or anything like that or not even a goalie, it doesn’t make sense but it worked out like that.”

The unit has allowed just 12 goals all season, with three of them coming in Tuesday’s dramatic 4-3 overtime state semifinal win against Parkland. Outside of that, they’ve been pretty tough to crack and Shaeffer has posted seven shutouts for the 15-1 Rams.

Zoe Sabol also gets a share of the unit’s success, starting the season at left back but moving into a defensive midfield role during the regular season. That move opened the door for Malone to take over at left back, where she starts on the same side as older sister Leah, a junior forward.

“They were all very encouraging and positive,” Malone said. “As a freshman coming into the back line in the middle of the season, there was a lot of pressure.”

McKean noted that playing defense is a sometimes unnerving prospect, especially for freshmen but added Croyle and Malone have responded very well to matching up with older, stronger and faster players. All five players in the back recognized they wouldn’t succeed playing as individuals, but as a united front.

“The uncertainty of this year, what it was going to be and how many games it would be, that also motivated us to leave it all out there every game,” McKean, the other center back, said. “You don’t know when it’s going to be your last. Kera and I are seniors, it’s our last season but Anna and Casey, it’s their first season so it’s cool to see the difference and how hard they work for us.”

Shaeffer started out as a keeper playing youth soccer but gave it up to become a field player, which is where she played on JV the last two years. This fall, with the team needing a goalkeeper, she put on the gloves once again and stepped between the posts despite several years away from the position.

On top of the critical saves she’s registered all season, Shaeffer has also found her voice as the commander of the field. Tuesday, she was often the Rams’ loudest player and backed it up with four pivotal saves that kept her team in a back-and-forth match.

“During the season, I think that I grew and growing within the team and getting to know them more really helps with that,” Shaeffer said. “I saw times where I haven’t talked and haven’t communicated and we struggled. They’re always telling me to talk, I know I can talk to them and tell them what to do and we can be respectful about it. The times I did talk and used my voice back there, I saw us succeed.”

“We’ve had a couple really big games where she’s made some huge saves so when she says something, we know she knows what she’s talking about,” Croyle added. “We’ll always listen.”

With an unusual dynamic of players and experience, a costly mistake here or there could have broken a different group. On Tuesday, in a game where they gave up three scores, the Rams backs saw their strength instead.

“That game proved a lot and everyone should be proud of themselves for how they handled it,” Dam, the right back, said. “We were down, we never had a game where someone scored on us three times and it can be very discouraging. I was discouraged for part of the game, I’m sure everyone else was but I’m so proud that no one let it affect their game and everyone played their heart out on the field.”

“I feel like my hard work has paid off and I’m so grateful for all the hard work this team has put in,” McKean said. “What the freshmen are doing for us seniors, it’s really cool to see.”

The 13-2 Tigers bring a formidable challenge with them to Hershey. While North Allegheny is making its first appearance in the state title, the program has won the last two WPIAL titles and edged state power Cumberland Valley in the semifinals on Tuesday.

Senior midfielder Sarah Schupansky, a Pitt recruit, steers the Tigers’ offense while quick and clinical forward Lucia Wells will put the Rams’ defenders to the test as well.

“Everyone’s energy and seeing what this means to everyone on our team really helps,” Malone said. “We of course want to do it for ourselves, but more importantly our seniors and everyone else on our team. Seeing these teams come at us in the postseason, we still know how much it means to everyone and that pressure and encouragement has helped us to do better.”

“I think we do a good job in the back of building each other up and not tearing each other down,” Dam said. “Cady and I, we know it’s no fun having someone yell at you for making a mistake so we’ve tried to do a good job of encouraging them and being positive with each other.”

It’s Pennridge’s second state final in three years but with few players still on the roster who got minutes in 2018, it’s a new experience for most of the Rams.

“I’m expecting it to be tough, we’re going to have to work,” Shaeffer said. “As long as we play our game, all come together and put out everything we have, I think we’ll be ready but we also want to enjoy the moment.”

“We need to stay focused but have fun while we’re there because we may not get back,” Malone said. “As long as we don’t give into the emotion, we should be able to focus on the task at hand and play our game.”

Just by stepping on the playing surface at HersheyPark Stadium on Friday, the Faith Christian boys’ soccer team will make history.

For the first time in program history, the Lions will play for a state title as they meet with WPIAL power Greensberg Central Catholic in the Class A final at 1:30 p.m. After several years of coming close only to fall short of Hersey, an unlikely group has finally gotten the program over the hump.

Coach Ryan Clymer’s side lost a lot of experience from last fall but rounded into form quickly this season. With mostly former reserves and JV players stepping into starting roles, the Lions found what worked and carried it to a District 1 title and through the state tournament.

Luke Perreault, Sebastian Zavaleta, Evan Wright and David Brownell have guided the Lions as seniors, juniors Marcus Pringle and Kevin Rea have been important as juniors and keeper JR Roberts has allowed one goal in four postseason games.