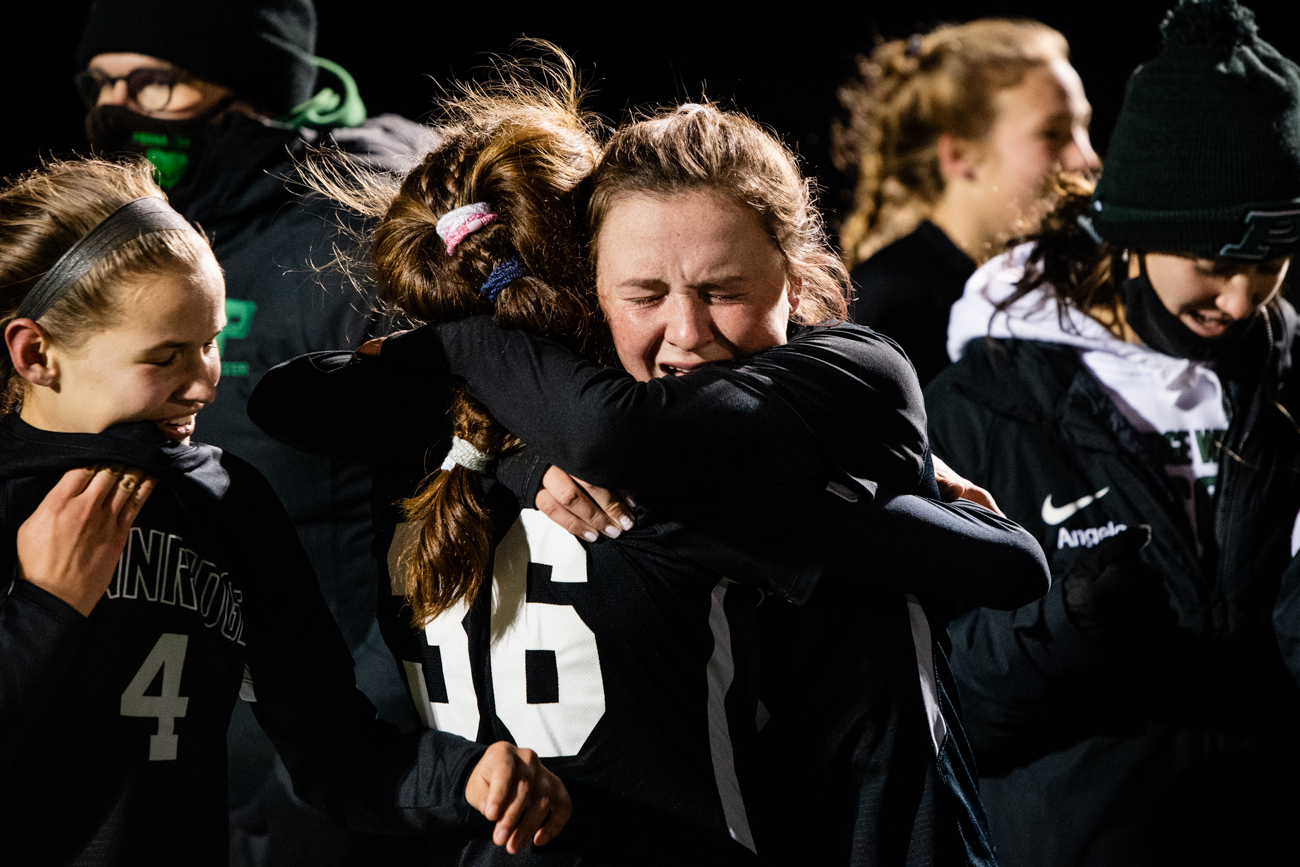 EAST ROCKHILL >> It wasn’t how the Pennridge girls soccer team normally does things.

But in this fall sports season of COVID-19 where normal has flown out the window, rolled down a hill, dropped into a river and drifted out to sea, the unconventional path was necessary Tuesday night to get the Rams to the PIAA-4A final.

“It was a crazy game,” Pennridge senior Lindsey DeHaven said. “Chaotic a little bit at times. I mean, just the back and forth of the goals was very stressful to be honest. I have no recollection of the ending just the ball going in and then the dogpile but I’m extremely happy.”

Twice in the second half Rams found themselves trailing Parkland in their PIAA-4A semifinal and twice they responded to pull even. Then finally in overtime the Rams overcame the undefeated District 11 champs – Liv Grenda lofting a shot over the keeper and into the top of the net at 8:18 of the extra session to deliver a 4-3 comeback victory.

“It’s hard to beat a team that doesn’t quit,” Pennridge coach Audrey Anderson said. “I love that quote and tonight just proved that. They had every reason to beat us. We weren’t playing our best game. They came out wanting to beat us and who doesn’t want to win this game? But we just didn’t stop fighting for every shot. We tried not to give them too many scoring opportunities so it was an incredible finish.”

Parkland was the first team since William Tennent in 2017 to put three balls in the back of the Rams’ net. But a senior class playing in the state semifinals for the third straight year paired with a strong group of underclassmen – including freshman Grenda, who scored twice Tuesday – found the resolve to keep battling back and earning the program’s third PIAA final appearance and first since 2018.

“It’s crazy. I’m honestly out of words,” said Rams senior Cady McKean, who scored to tie the game 3-3 in the second half.  “It’s just awesome to see this team come together like that through the ups and downs we were able to fight for each other out there and just put the game away. “

All that’s left now is what has so far eluded Pennridge in its previous two trips to Hershey – a state crown. The Rams face North Allegheny – a 1-0 winner over Cumberland Valley in the other semifinal – 4 p.m. Saturday at Hersheypark Stadium.

“I think there’s a lot going around with this is like an asterisk year and ‘asterisk 2020’ but honestly that asterisk just means it was so much harder to get to states,” DeHaven. “Just because of the fear of getting shut down cause of COVID and then also just having to work for every single game. It was just a very, very tough season and very proud of how we persevered through this season.”

Pennridge had marched decisively to its second-straight District 1-4A title, outscoring its four tournament opponents 14-2 capped by shutout wins over Abington in the semis then Spring-Ford in the final.

The Rams came into Tuesday having outscored teams 51-9 this season and allowed two goals in a game just once – that coming in their lone loss, 2-1 at Central Bucks West Oct. 15.

Against Parkland on their home turf at Helman Field, it seemed early the script would be the same as the Rams took a 1-0 lead as DeHaven headed in a stellar cross from Leah Malone at 33:26 in the opening half.

But the visiting Trojans proved to be constant struggle for the Pennridge defense to curtail – Parkland’s pressure eventually forcing a foul in the box for a penalty kick which Alex Marsteller converted to knot things at one with 28:38 to go before the break.

In the second half, a free kick gave Parkland its first lead at 2-1 when Demi Olatilo knocked the ball in at the far left post at 25:53.

“They were very, very fast dribblers and I think they weren’t afraid of our backs,” Anderson said. “They had a lot of confidence in themselves and I think we struggled with that. It’s usually ‘Oh my God, people have to watch out for Pennridge’s midfield’ or ‘their backs are strong,’ or ‘watch out for their speed up top.’ So tonight we had a taste I think of our own medicine and we struggled at times.”

“And again at halftime we had to sort out some things. And don’t be afraid – it was scary for a lot of those girls, you could see in the first 15 minutes how scared those freshmen were, those underclassmen, to be on a field in a game this big.”

Grenda struck for the equalizer seven minutes later, sending a cross from Malone into the far left corner at 18:52. Marsteller, however, put Parkland back up off a rebound for her second tally with 12:20 remaining.

“We’re never experienced this before,” DeHaven said. “It’s always kind of been we’re in control of the game and I think honestly they were in control of that game. So I think it was very stressful and very panicked at times and I’m really, really proud of how the way these girls overcame that panic and overcome down a goal and then tied then down a goal then tied then ended up winning. I think it was a great team win and I’m speechless almost.”

It took the Rams only 3:04 to answer back and make it 3-3 on a free kick just outside the box with McKean turning on a loose ball and ripping it past the keeper and inside the right post.

“It was unreal. Honestly, I would never expect me to be scoring a goal in the state semifinal game. But my teammates have my back the whole game and think if any of my teammates where in that spot they would have scored that.”

The momentum swung to Pennridge from there, the Rams pushing hard for a winner in regulation but did not find one until OT when Grenda’s right-footed strike sailed into the upper portion of the goal.

“I just think it was the year,” Anderson said.  “It’s 2020, it’s COVID – everything that could be going against us went against us and this group still found a way to find ways to win games and find ways to ignore all the negativity from outside influences. And I think it’s hard to play with a target on your back and for Lindsey’s senior class for them to have that target on their back all four years of we have to take Pennridge down, this, the expectations.

“For us to go through this season understanding that each game that we get to play is kind of a gift, without sounding cheesy, we never knew when our last game was going to be. And we hope that we get to play Saturday but looking at things we want to make sure we’re making the most of every opportunity – hashtag make it count.”