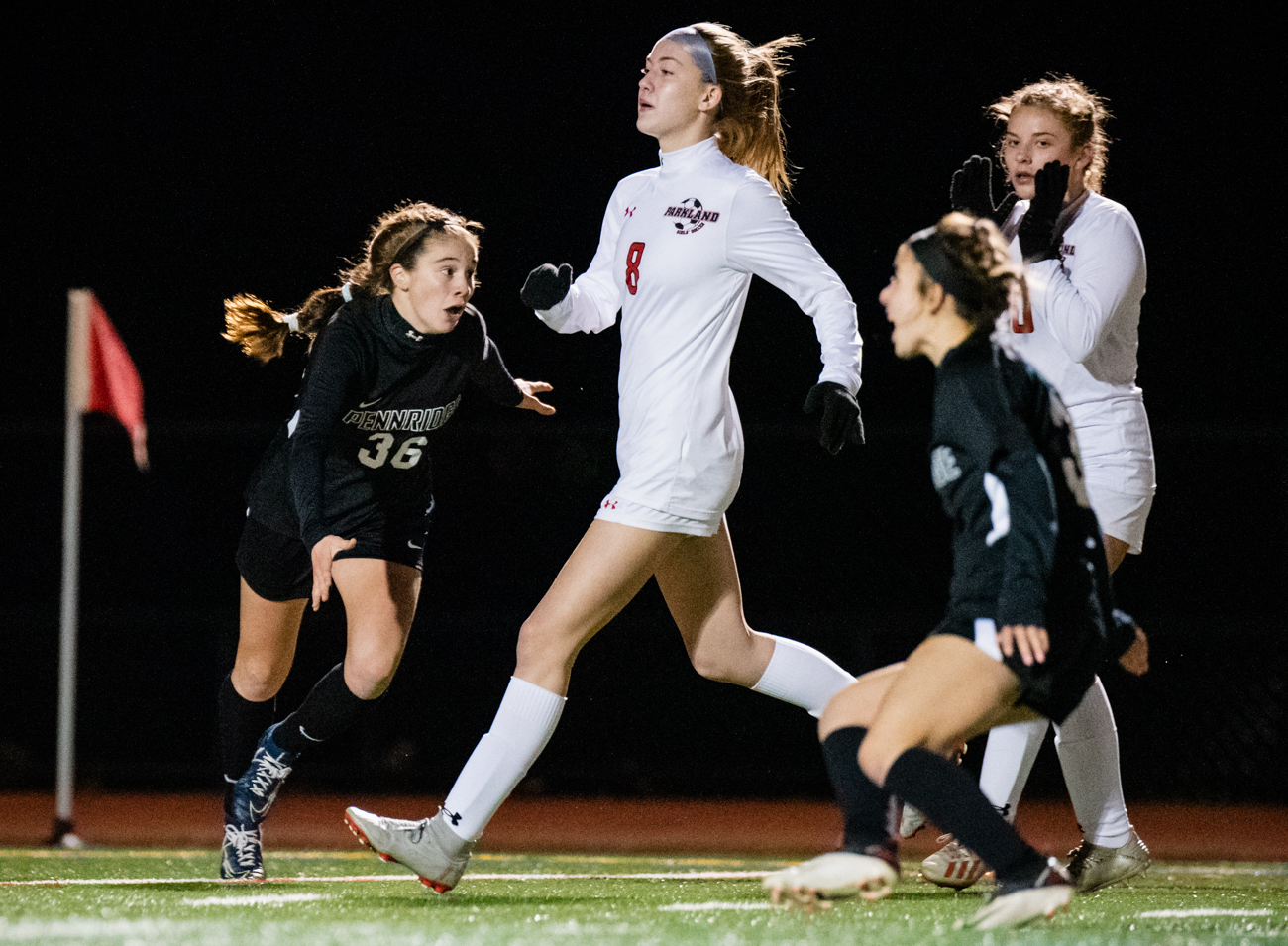 EAST ROCKHILL >> Liv Grenda didn’t know what to do next.

Having just scored the game-winning goal in overtime to send her team to the state final, the Pennridge freshman did the sensible thing and waited for her teammates to mob her. Joey Tomlinson, who played Grenda the ball that led to the winner, got there first followed by the rest of the Rams.

The goal, Grenda’s second of the night, delivered Pennridge a 4-3 extra time win over Parkland in a monster of PIAA 4A girls soccer semifinal Tuesday night at Helman Field.

“It was amazing,” Grenda said. “Joey Tomlinson flicked it on to me, I took a touch, knew I needed to get it on frame and wanted to see what happened. You don’t get many chances in overtime, so you take them as they’re given to you. Once I saw it hit the back of the net, I didn’t know how to react, it’s crazy to think we’re going to Hershey.”

Parkland, the District XI champion that came in with the sterling 14-0 record and 63-3 ratio in goals for and against, was every bit as good as advertised and pushed the Rams nearly to the breaking point. There was never going to be a rush of pressure in the second half that had allowed Pennridge to put away games against Pennsbury, Abington and Spring-Ford because the Trojans simply weren’t going to allow it.

Instead, Parkland took the game to Pennridge and spelled out 80-plus minutes of highs and lows both ways as each side took the best shot the other could muster. Pennridge has leaned heavily on its young players all fall and Tuesday was the ultimate test of how they would respond in a season-defining moment.

“It was very difficult at times,” senior co-captain Lindsey DeHaven said. “Each time they scored, there were a few minutes we all thought ‘man, this is it. This is our last game,’ but we got so much energy from the bench it really helps motivate you. We could see time was on the clock, we have to keep pushing, we have to keep driving, this is our game.”

DeHaven struck first, crushing a header amidst a swirl of snow flurries at the far post after a pinpoint cross off the left flank from freshman Casey Malone found her seven minutes into the duel. Trojans keeper Teresa Gonzalez, who stonewalled plenty of chances during the game, came up with a big save off a corner soon after and allowed her team a chance to stabilize.

Up top and in the midfield, the Trojans were determined to not back down from Pennridge and instead force the Rams backs to do a lot of work defending. Quick passes, well-read through balls and some crafty touches by Parkland prevented Pennridge from swarming on defense and senior Alex Marsteller used it to her advantage.

The standout center mid drew a foul in the box with 28:38 left in the opening half, then confidently stepped to the spot and buried the penalty kick for the first blow to Pennridge’s will.

“Our emotions were up and down the entire time,” senior defender Kera Dam said. “Parkland was an amazing team, they’re one of the best teams we’ve ever played. I was constantly thinking ‘we’re going to lose’ or ‘we’re going to win,’ it just kept going back and forth the entire game.”

At the half, it felt like a wholly equal game. Both teams had hit the crossbar once, both had scored and both had put several scares into the other team’s fans but it just a preview of the wild second half in store.

Following about 14 minutes of half-chances and near opportunities, Parkland drew a foul wide on the right about 30 yards from goal. Jocelyn Fowler hit a great ball in, serving to the far post where Demi Olatilo crashed in and scored, giving the Trojans their first lead.

Marsteller followed soon after with a slick move to slip a defender and ripped an open shot, but Rams keeper Sierra Shaeffer read it and covered for the save. Shaeffer played an excellent game as well, making five stops but never letting her confidence or voice waver when she did get beaten.

“How can you not rally around that as a team when your keeper just saved you,” Rams coach Audrey Anderson said. “The girls could then play with that energy after Sierra made those saves, that tells a story itself.”

Olatilo’s goal kicked off a wild span of roughly 17 minutes that featured four goals and a lot of willpower being shown both ways.

Rattled slightly by going down, Pennridge settled around DeHaven and ramped its work rate back up, soon winning a throw deep in Parkland’s defensive third. Like they had against Spring-Ford, the Rams turned it into a goal when Leah Malone played a cross in that Grenda heel-flicked home with 19 minutes to play.

“We never want to lose an opportunity because we want it all to ourselves,” Grenda said. “It comes down to us wanting it as a team. It doesn’t matter if you’re the one who scores it, assists it or starts the play, you’re always a part of it. If you can help make the difference, sometimes that’s the difference between winning and losing the game.”

Every time it seemed the Rams were close to hitting their full stride and taking over, Parkland denied them the chance. Marsteller, who finished her senior season with 12 goals and 12 assists, reached the final tally on a pure effort play.

A shot by Mariana Aubele-Gonzalez forced Shaeffer into a difficult, point-blank save but the keeper could do nothing as Marsteller hustled after the play and booted the free ball in for a 3-2 lead with 12:20 to play.

GIRLS SOCCER 18:52 2nd half: Pennridge 2, Parkland 2
Liv Grenda from Leah Malone off a throw in pic.twitter.com/Lzfoe8QsQ9

Pennridge, which gave up three goals in a game for the first time since 2017, was again on the mat and faced a decision to get up or stay down.

“The freshmen, really all of our underclassmen, they play so maturely and it really makes it easy to play with them,” senior back Cady McKean said. “It feels like we’ve been playing together so long and that connection, it doesn’t matter age, size, we’re all willing to put in the same amount of effort. That’s what keeps getting us what we need.”

Leah Malone didn’t score but the junior left a major imprint on the match, especially in both Rams equalizers. She had her legs clipped out right on the edge of the box with about 9:15 on the clock, leaving the Pennridge bench clamoring for a penalty but settling for a free kick inches off the 18-yard marker.

DeHaven drove a low ball in, no surprise finding Malone who had her shot blocked by a Parkland defender. McKean, who pushed up for the set piece, followed up and hammered in the tying goal.

“The ball was right by me in the right place, I didn’t know if anybody else was there but I was going to hit it as hard as I could,” McKean said. “I looked right at the corner, as soon as I hit it, I thought ‘I want this to go in so bad. My team has worked so hard, we need this.’”

Grenda almost put the Rams up with eight to play, but Gonzalez made a super save to yield a corner, which the determined Trojans defenders then cleared out. Pennridge had a couple late chances, but whether it was Parkland getting in the way or a Rams player waiting a hair too long to shoot, the teams had to settle for an extra session.

“This was our last game ever on this field as seniors and as a team and I wouldn’t have asked for another way to end that game,” Dam said. “Even though it was crazy all over the place, I couldn’t ask for a different ending because I’m so happy for my team and how everyone played and it’s a great way to come off this field as a senior.”

Pennridge opened the overtime with about four minutes of sustained pressure and seemed to have established control just enough to crack open the door. Freshman Sophie Craig, who gave the team a lift as a center mid, started the final sequence by winning a ball in the middle and finding Tomlinson.

GIRLS #SOCCER: 33:26 1H @PHSWomensSoccr 1, Parkland 0. Casey Malone a superb cross into the box finds the head of Lindsey DeHaven for a goal. pic.twitter.com/nQLYvBTZVv

Tomlinson shielded off a larger defender while fluidly spinning and using her one touch to slip the ball to Grenda. From there, Grenda did the rest by wrong-footing a back and taking a touch to settle before launching for goal.

“When I touched it around here I just had that feeling it was going to go back post,” Grenda said. “I looked up, saw their defender running to the back post so I knew I couldn’t hit it on the ground and had to get a little bit of air. I thought it was going to hit the crossbar and come off so when I saw it hit the net, I was speechless.”

Pennridge will face North Allegheny in Saturday night’s state final, which is set for a 4 p.m. kick at HersheyPark Stadium.

The Pennridge Rams pose with Hershey chocolate bars after defeating Parkland 4-3 in overtime on Tuesday, Nov. 17, 2020 to secure their trip to Hershey, Pa. for the PIAA-4A final on Saturday, Nov. 21. (James Beaver/For MediaNews Group)

DeHaven, who started when the team last reached the state final in 2018, couldn’t help but shed a few tears at the end of Tuesday’s match.

“It was crazy, this game was so full of emotions just because of how back and forth it was,” DeHaven said. “Being a senior, it’s different knowing it could be your last game and we didn’t want to lose on our home turf so the way it ended, that’s what made me emotional. We build such a family camaraderie around this team, I didn’t want it to be our last game.”