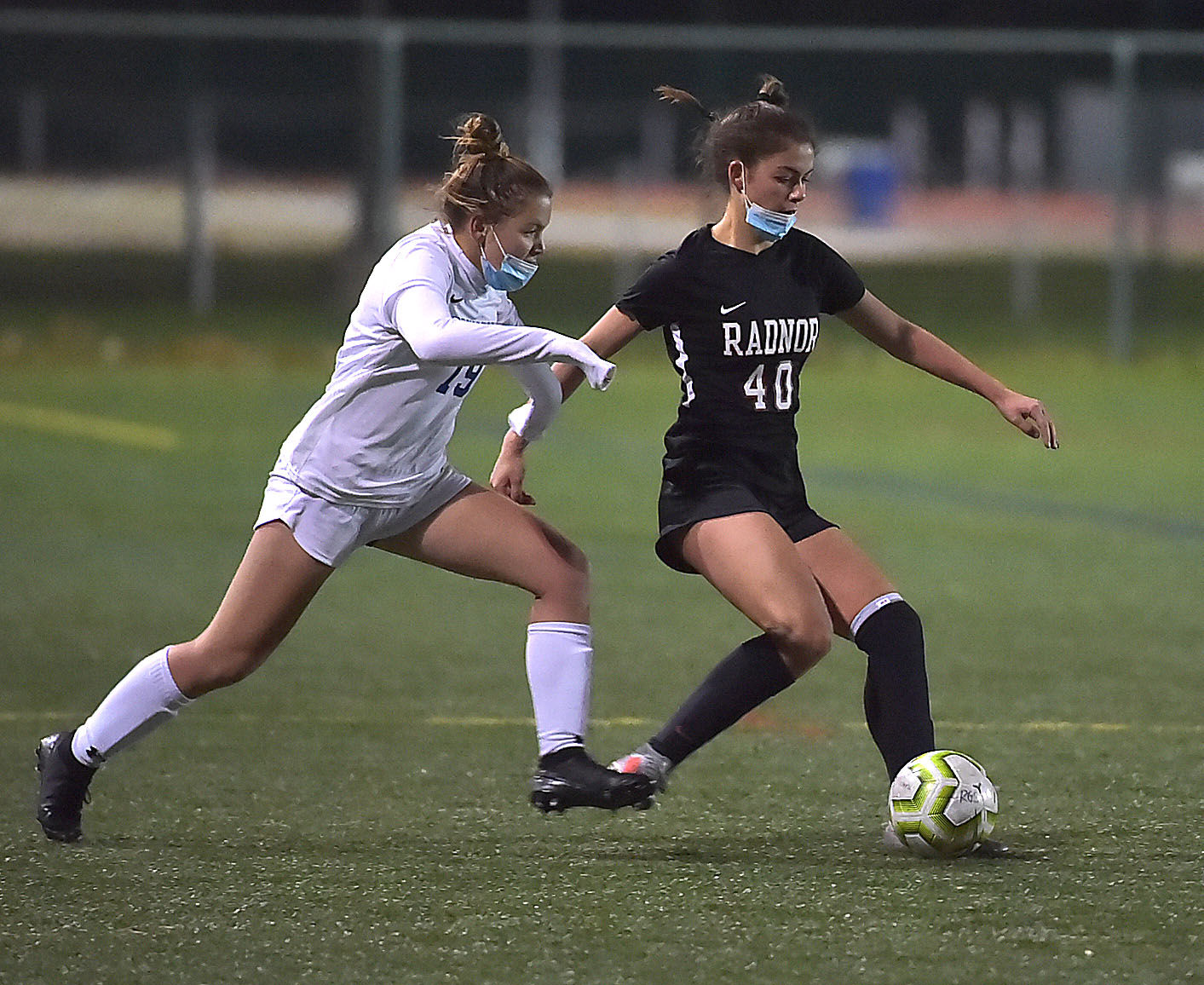 RADNOR — A season ago, then-sophomore Emily Daiutolo earned All-Central recognition at center back for Radnor. This year, as tactical needs have shifted, Daiutolo has found herself farther up the park, dictating the game from midfield.

Tuesday, she showed that in either position, she can have plenty of influence.

Daiutolo’s header off a corner kick by younger sister Jane with seven seconds left in the first half was the decider, leading Radnor to a 1-0 win over No. 6 Springfield in the Central League quarterfinals. The victory sends third-seeded Radnor into Thursday’s semifinal against No. 2 Conestoga, which advanced via forfeit over Strath Haven. The sisterly connection paid off on the corner. Radnor had two corners minutes before being turned away, one on an insane goalmouth scramble cleared only for Jane Daiutolo to lash a volley that goalie Olivia Hannah dove to save, the second another scramble that ended in a blocked shot from outside the box.

With time ticking down and the whipping wind at Encke Field still at Radnor’s back, Jane Daiutolo lofted in a perfect ball that Emily ran onto and planted a forceful downward header, leaving Hannah no chance.

“We prefer a driven ball into the six anywhere, just try to get a head on it or any body part,” Emily said. “It was a prefect ball, and I just had to get something on it.”

It’s but one way in which Emily Daiutolo applied her stamp on the game. The same traits that serve her in defense – field vision, poise under pressure, the ability to pick the right ball at the right moment – are magnified in midfield. She’s not just the defense’s escape valve but an early wave of attack, the conduit between the two phases. She has the calming presence that allows the game to settle around her when the ball finds her.

In the first half, for instance, the game was fairly sedate, both teams acclimating to the shifting wind, before the raft of Radnor set-piece chances. That allowed Daiutolo to put her foot on the ball and dictate tempo, switching sides, engaging wingers and keeping Radnor’s defense out of trouble by pushing the ball into Springfield’s end of the field.

“You have to be quicker on your feet and know where everyone else is,” Daiutolo said. “You have to pretty much have a decision on where you’re going to play it before you even get the ball. It’s much quicker, but I like it a lot.”

“She’s such a rock-solid player in the middle,” Radnor goalie and senior captain Elise Palmer said. “She knows what she wants to do with the ball, and she makes me so much more comfortable and is a good communicator, so she’s amazing anywhere on the field. … She’s such an intelligent player that if you’re in trouble, get it to Emily and she’ll calm things down.”

Radnor, which won the regular-season meeting between the teams 2-0, largely controlled the first half, the wind a definite factor. Hannah, a sophomore backup who came into the lineup three games ago when Emily Boyer was injured and pitched a shutout in the opening round over Marple Newtown, had to make a save within the first two minutes and was kept busy. With Daiutolo pulling the strings, wingers Selah Koleth and Tori DiCarlo were active, with Avery Ciatto stretching the defense up top. Kate Boujoukos, often Daiutolo’s central midfield partner, slalomed through defenders and ripped one high a minute before the goal, often popping up in dangerous spots.

Adjusting to the wind was an issue for both goalies.

“It was an extremely large factor,” said Hannah, who made six saves. “… It’s very hard, the wind will take the ball in a total opposite way, so it’s hard to tell what direction it’s going to go.”

“So big,” Palmer said. “I knew that on this side, I had to play higher up because the wind was going against them and it was going to be shorter than I thought. And I knew on that side, the wind was coming towards me, so if they hit a long ball, it would come closer to me.”

Palmer would get her turn eventually. With the wind in the second half, Radnor’s advantage was less pronounced. The Cougars’ first shot came in the 45th minute, Olivia Gutowski dragging a shot over the bar after Caroline Walters’ run up the left touchline. Palmer’s first save came four minutes later, Coryn Silberstein volleying a long throw-in from Alexis Aaron right at the keeper.

Springfield poured on the pressure late. Walters hit an innocent looking shot that nonetheless short-hopped the base of the post and went out. Springfield drew a free kick with 2:10 left, and midfielder Sara Bean struck a delivery over the wall that Palmer needed two hands to paddle out of play.

“I pretty much was just thinking that I knew it was going to go to me, because when they’re down 1-0, they’re not going to play it to someone else and just go for the shot,” Palmer said. “So I made sure I was ready, I saw it, I threw my hands at it and I stopped it.”

Defender Tellian Schwarz cleared the ensuing corner with a near-post header, then a second corner in the final minute led to a Gutowski toe-poke always rising high.

It was enough to make sure Radnor has at least one more game to play.

“I’m really excited and optimistic,” Emily Daiutolo said. “I hope we can win the next one and have another game on Saturday.”

In other Central League quarterfinals:

Garnet Valley 2, Penncrest 1 >> Alyssa Wert’s goal with six minutes to play was the final blow of a wild, three-goal second half.

Wert had set up Anna Goldkamps to open the scoring for the fifth-seeded Jaguars, but Shayna Polsky equalized for the No. 4 Lions on a penalty kick to set up a grandstand finish.